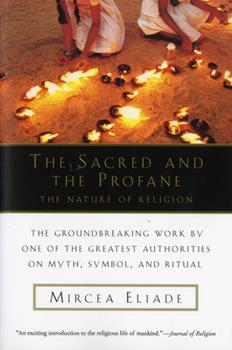 The Sacred and Profane

A highly original and scholarly work on spirituality by noted historian Mircea Eliade In The Sacred and the Profane , Mircea Eliade observes that while contemporary people believe their world is entirely profane, or secular, they still at times find themselves connected unconsciously to the memory of something sacred. It's this premise that both drives Eliade's exhaustive exploration of the sacred--as it has manifested in space, time, nature and the...

I like the book but it was drawn in everywhere

Published by Sebastian , 1 year ago
Highlighted and notes everywhere this was obviously someone’s study book

The Ontological Nature of Religion

Published by Thriftbooks.com User , 18 years ago
_The Sacred and the Profane_ by Mircea Eliade is a work that examines (or attempts to examine) the ontological meaning of religion and religious experience. It is an excellent, if highly abstract work that tries to explain what it means to actually be. Religious experience is that of knowledge of the sacred and the meanings attached to it. The sacred distinguishes itself from the profane by what Eliade terms a "hierophany" or manifestation of the sacred. The sacred indicates a break in profane existence, both in space and time. Space becomes sacred when it has a meaning above and beyond itself, and time becomes sacred when it hearkens back to man's primordial beginnings, rooted in myth. It symbolizes death and rebirth. _The Sacred and the Profane_ covers foundation ceremonies, ritual sacrifices, the "axis mundi", New Year's celebrations, the polarity between sun and moon, masculine and feminine, rites of initiation (such as baptism and its parallels in other religions), and modern man's fall into an almost completely profane world. Eliade, who was affiliated with a pro-fascist revolutionary group (whose slogan was "long live death!") in his native Romania, is hoping toward some type of spiritual revival. Religious man, contrary to modernist doctrines, actually looks for the deeper value in mere existential being, rooted in something above and beyond himself, the true nature of Reality. In the conclusion of _The Sacred and the Profane_ Eliade ponders why religion has fallen away in the West today. Religious man looked toward a hypothetical Golden Age, Garden of Eden, Elysian Fields, Paradise, etc, as something which had existed in the mythical past and to which fallen humanity would someday return. This consciousness has been lost from modern man, and Eliade considers this question to be beyond the realm of pure history, and perhaps a thing to be investigated by "even theologians."

The Traditional and the Modern

Published by Thriftbooks.com User , 20 years ago
In the "Sacred and the Profane", Mircea Eliade describes two fundamentally different modes of experience: the traditional and the modern. Traditional man or "homo religious" is open to experiencing the world as sacred. Modern man however, is closed to these kinds of experiences. For him the world is experienced only as profane. It is the burden of the book to show in what these fundamentally opposed experiences consist. Traditional man often expresses this opposition as real vs. unreal or pseudoreal and he seeks as much as possible to live his life within the sacred, to saturate himself in reality.According to Eliade the sacred becomes known to man because it manifests itself as different from the profane world. This manifestation of the sacred Eliade calls "hierophany". For Eliade this is a fundamental concept in the study of the sacred and his book returns to it again and again. The "Sacred and the Profane" is divided into four chapters dealing with space, time, nature, and man. To these is appended a "Chronological Survey Of the History of Religions as a Branch of Knowledge."In CHAPTER ONE Eliade explores the "variety of religious experiences of space". Modern man tends to experience all space as the same. He has mathematsized space, homogenizing it by reducing every space to the equivalent of so many units of measurement. What differences there are between places are usually due only to experiences an individual associates with a place not the place itself, e.g. my birthplace, the place I fell in love, etc. But religious man does not experience space in this way. For him some space is qualitatively different. It is sacred, therefore strong and meaningful. Other space is profane, chaotic, and meaningless. Traditional man is unable to live in a profane world, because he cannot orientate himself. In order to gain orientation he must first have a center. The center is not arrived at by speculation or arbitrary decision but is given. A revelation of the sacred, a hierophany establishes a center and the center establishes a world because all other space derives its' meaning from the center.CHAPTER TWO deals with sacred time. Here Eliade treats briefly material he covers at greater length in "The Myth of the Eternal Return". As with his experience of space, religious man experiences time as both sacred and profane. Sacred time, the time of the festival, is a return to the mythic time at the beginning of things, what Eliade calls "in illo tempore" (Latin: "at that time"). Religious man wishes to always live in this strong time. This is a wish to "return to the presence of the gods, to recover the strong, fresh, pure world that existed "in illo tempore". According to Eliade sacred or festive time is not accessible to modern man, because he sees profane time as constituting the whole of his life and when he dies his life is annihilated.CHAPTER THREE is entitled "The Sacredness of Nature and Cosmic Religion." Here Eliade explains that for religious man

What Is the Sacred?

Published by Thriftbooks.com User , 20 years ago
This is a fundamental text for religious scholarship and for living an examined life. Eliade wastes no time trying to explain or define the experience of the sacred in terms of other disciplines (for instance, the sacred as psychological experience (Campbell) or the sacred as sociological phenomenon (Burkert)). Instead, he examines the sacred as sacred.Eliade shows how sacred space and sacred time are supremely REAL space and time, permanent and eternal in opposition to the fluid space and time of the profane world. Homo religiosus re-enacts the primordial deeds of the gods in his rites and, indeed (unlike modern man), in all his acts, because only those primordial acts are truly real. Likewise, irruptions of sacred phenomena into profane space create sacred space, space which is created, which is eternal, which is real.Read this book before undertaking any serious study of comparative religion. Read this book along with other classics about thought. Read this book and consider your own experience of the sacred. But whatever you do, read this book.

Published by Thriftbooks.com User , 21 years ago
That the phenomenon of religious experience brooks no debate whatsoever. Eliade examines characteristics of this phenomenology, contrasting what humankind has experienced for tens of thousands of years with modern, stripped-down, rationalized religion. If nothing else, this book demonstrates what "modern" religions lack. The price they have paid in order to become modern deprives them of the underlying phenomena which have always empowered spiritual experience as a meaningful force in the past.The chief point of the book is "to show in what ways religious man attempts to remain as long as possible in a sacred universe, and hence what his total experience of life proves to be in comparison with the experience of the man without religious feeling, of the man who lives, or wishes to live, in a desacralized world."Eliade begins with hierophany, the event of the sacred manifesting itself to us, the experience of a different order of reality entering human experience. He presents the idea of sacred space, describing how the only "real" space is sacred, surrounded by a formless expanse. Sacred space becomes the point of reference for all other spaces. He finds that people inhabit a midland, between the outer chaos and the inner sacred, which is renewed by sacred ritual and practice. By consecrating a place in the profane world, cosmogony is recapitulated and the sacred made accessible. This becomes the center of the primitive world. Ritual takes place in this sacred space, and becomes a way of participating in the sacred cosmos while reinvigorating the profane world. Next, Eliade considers sacred time and mythology. While "profane time" is linear, sacred time returns to the beginning, when things were more "real" than they are now. Again, ritual plays an important part. Time is regenerated by being created anew as rituals tie participants back to the sacred origins of the cosmos. Thus, the cycle of the year becomes a paradigm for community renewal and for replentishing the world from the sacred genesis. He goes on to examine how a number of the elements of nature typically play into sacred experience. He considers water, the sacred tree, the home and the body. He notes that "No modern man, however irreligious, is entirely insensible to the charms of nature." Cosmic symbolism adds a new value to an object or action without removing the inherent values. Religious man finds within himself the same sanctity which he finds in the cosmos. "Openness to the world enables religious man to know himself in knowing the world--and this knowledge is precious to him because it is religious, because it pertains to being." He concludes the book by considering the contrast between homo religiosus and profane man. Non-religious man finds that all things have been desacralized. This can be liberating, in that oppressive meanings have been removed--but also impoverishing as all actions and items have been deprived of spiritual significance. He speaks to the great loss of Ch

Published by Thriftbooks.com User , 23 years ago
This eminently readable introduction to cross-cultural religious studies is one of the gems of my personal library. Eliade does not believe that "primitive" means "simple-minded" or "outmoded", hence, his discussions of "primitive" religious ideas are sympathetic and penetrating. The final section of the book skewers "modern" humanity's pretensions to having transcended the sacred. The appendix contains a succinct and iluminating chronology of the development of "history of religions" studies. If you always thought (along with most of the rest of the world) that "myth" simply meant "old superstition" or "false story"' this book has a few surprises in store for you. Just read it!
Trustpilot
Copyright © 2022 Thriftbooks.com Terms of Use | Privacy Policy | Do Not Sell My Personal Information | Accessibility Statement
ThriftBooks® and the ThriftBooks® logo are registered trademarks of Thrift Books Global, LLC