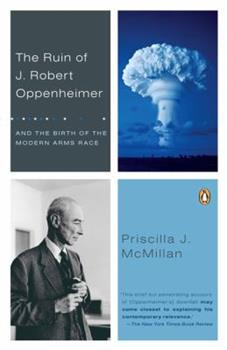 The Ruin of J. Robert Oppenheimer: And the Birth of the Modern Arms Race

America reeled in 1954 when Robert Oppenheimer was charged with violating national security. Could the director of the Manhattan Project, the visionary who led the effort to build the atom bomb, really be a traitor? Drawing on a wealth of newly declassified documents, Priscilla J. McMillan, author of the bestselling Marina and Lee, exposes for the first time the conspiracy that destroyed one of America's most illustrious scientists and helped draw...

Most prominent victim of the Cold War

Published by Thriftbooks.com User , 13 years ago
This well-reasoned, well-researched book pinpoints the exact moment when the Cold War was effected as the dominant foreign and domestic policy of the United States. Politically victorious, but scientifically illiterate, triumphalist politicians and economic leaders are shown to have succumbed to paranoid fears and prospects for endless war profits, and in the process debased the man who had insured the ultimate victory of America over perhaps the darkest military forces ever faced by civilized humans. It is all you need to read to understand American politics in the second half of the twentieth century.

Published by Thriftbooks.com User , 14 years ago
Growing up, one of the hardest lessons I had to learn was that there are people in the world who, often hiding behind obsessive secrecy, are not very nice people. Raised to believe everyone had equal worth and deserved equal respect and consideration, it was a mortal shock to me to discover facts to the contrary. There really ARE monsters under the bed sometimes. This book is a classic example: delineating the decline and fall of J. Robert Oppenheimer not through any fault of his own or any hint of disloyalty or whiff of impropriety, but strictly because of the machinations of a cast of thoroughly dishonorable characters who took it upon themselves to become Robert's enemies. Politics is never a clean business (like sausage-making...) but it's particularly heinous what was done to Oppenheimer since his motives, in opposing nuclear proliferation, were head-and-shoulders more "civilized" than the wolf pack pursuing him. Narrow minds and twisted moralities won the battle -- as often happens -- and a generation of schoolchildren grew up cowering under our desks during monthly nuclear attack drills. History is the study of events, but people create the events. Sometimes bad people make the decisions, and everyone suffers.

Published by Thriftbooks.com User , 15 years ago
Robert Oppenheimer led the country's World War II Manhattan Project to develop the atomic bomb, but America's nuclear monopoly was short lived. Only four years after Hiroshima and Nagasaki, the Soviets exploded their own device. An internal debate ensued within the Atomic Energy Commission's General Advisory Council (GAC) which was largely responsible for United States nuclear policy, chaired by Oppenheimer, on the merits of pursuing a hydrogen bomb. This debate occurred behind the scene and out of the public spotlight. Indeed the news of the Soviet accomplishment was delayed while President Truman determined its impact. Then not only did Truman overrule the GAC he "bound them to secrecy at a moment when they urged the public be more fully informed" (56) stifling any opportunity for an open public debate on a major national security issue. At its "Halloween meeting" the GAC voted 8-0 to recommend the hydrogen bomb not be developed. McMillan explains how this opinion, the decision of scientists, diverged into a full-fledged developmental program comparable to the Manhattan project notwithstanding the reality of the bomb's destructive power. It is McMillan's contention that had the scientists, who knew the potential destructive power of the hydrogen bomb and who advocated a nuclear freeze, been able to keep control away from politicians, the arms race, hallmark of the Cold War, could have been averted. McMillan argues "Oppenheimer "believed in international control, but he did not know how to get there [because] he was the possessor of a divided mind and extraordinarily divided emotions."(60) His personality prevented him from making a more forceful case against the "Super," as Edward Teller's design was known. One thing led to another and "the decision to produce the H-bomb enshrined secrecy and made the cold war a way of life...."(61) The urgency was heightened with the advent of the Korean War. The war also had implications affecting Oppenheimer and his relations with the Air Force. Big bombs were preferred to defend Europe but smaller tactical weapons were needed in Asia where there existed few large targets. Atomic weapons seemed to promise "'the greatest possible gain in minimum time'"(91) reducing the need for a larger bomb. But Stan Ulam and Edward Teller developed the concept of "radiation implosion," which revived thermonuclear possibilities and led to the creation of a second (Livermore) laboratory in California diluting Oppenheimer's authority. Oppenheimer's past affiliations with the Communist Party, Edward Teller's ambitions, and fellow GAC member Lewis Strauss' Machiavellian maneuvering, Soviet ambitions, Air Force militarism, McCarthy' red baiting, admitted espionage, and the war in Korea, combined to shunt Oppenheimer aside. In McMillan's treatise Oppenheimer, given his faults, is seen as a sympathetic figure that could have changed the course of history. However McMillan's bias is palpable: "Livermore and Los Alamos create

Outstanding and Alarming Warning for Today!

Published by Thriftbooks.com User , 17 years ago
I knew Oppenheimer as a customer of my father, and I was always impressed by how sincere and genuine a human being he was. I'm certain he was a task master and devoted to science, but there was a sense of the consequences of his action, a fundamental humanity, if you will, that certainly was absent from the soul of Edward Teller. And this is a book that details how misinformation and innuendo leaked to the appropariate media would ruin someone who was in the way of a more nefarious and evil agenda. Teller and his colleagues were the Karl Rove and Dick Cheney of their times. Essentially this is a story of jealousy, of power, of corruption in the soul. In addition to his seminal work with the Manhattan Project, Oppenehimer was also a man concerned with the impact on the world thereafter. He admonished Truman not to use what they had developed on no more sophisticated principle than "just because you can, doesn't mean you should," a notion wholely lacking in the Bush Administration's Putsch below the 49th parallel. The world community needs to know the perils portrayed in this book as it will provide them with the analyses they need to see beneath the Crusade of Hate and Bigotry at work in a man who doesn't think but believes. Such was the case with Edward Teller. Teller was an Eastern European fascist (think Rick Santorum with a physics degeree - I know, I know, that's mutually exclusive) who came to the US to fulfill his meglomaniacal and socio-pathological urges. His was a peculair kind of savagery as his lust for the destructive power of the, at that point, theorectical H bomb fueled his mysoginy, his anti-semitism and his misguided research (Teller's own strategies for the Bomb didn't even work on paper - but he did have the Administration's ear). The problem for Teller was Oppenheimer - he was smarter, more thorough, practical, compassionate and aware that science, were it not to give birth to some other nazism in the soul, must have a conscience. Would that the self-named Christians of today would regard faith as bearing that imperative as well. In any case, Teller could not abide Oppenheimer and the prospect that O would ultimately compel the world to be responsible. Teller wanted the power, he wanted deployment, he wanted to strike first. To accomplish this, a bit like saying that you have earned the political capital and you intend to spend it, Teller dug into O's background. Oppenheimer had been sympathetic to the communist theory of a just world order, but like many another intellect, renounced it when the praxis didn't match up. In a US filled with fear of attack from an unknown invader - sound familiar folks? - he and his cadre managed to plant just enough smut into the minds of those who supervise security of the US scientists to smear Oppenheimer. His character maligned, he retreated to Princeton. The book documents this struggle with a gripping sense of tragedy and should inflame anyone with a conscience. It should also be a wake u

A Man of Great Strengths and Great Weaknesses

Published by Thriftbooks.com User , 17 years ago
In studying Oppie I am reminded of the old saying about 'Gods too have feet of clay.' Oppie was a man of great talents, and some characteristics that I don't know if could be called great failures or not. This book concentrates on the 1949 to 1955 period. These were the McCarthy years, when rumor, accusations, and the red scare. World War II was over, the Soviets, under Stalin had imposed the iron curtain. And it had become clear that communist spies in England and the United States had delivered the secrets of the atomic bomb to them. As you might guess from the title, this book is very pro Oppenheimer. She blames Air Force officials, anti-Communist politicians, and competing scientists, particularily Edward Teller for seizing control of the U.S. nuclear policy and building ever more deadly weapons. Her telling of what happened is clear. Her philosophical tone is a bit more questionable. She asks: Could development of the H-bomb have been averted? -- As a physicist I'll answer - No! It could be done (they thought at the time and were right), it would have been too intriguing a scientific question to let it pass. If not exactly at that time, then it would have been later. And considering the political situation at the time, no question that it would have been done. She is very good about Oppie's weaknesses. After making an emotional appeal to Truman, Truman is rumored to have said, 'don't let that cry baby back into my office.' There's a question I've always wondered, she doesn't answer it, I don't know that there is an answer. After the loss of his security clearance his influence on science policy was over. He became the director of the Institute of Advanced Study at Princeton. He thought and wrote about the problems of intellectual ethics, morality, and the most advanced subjects in physics. Was he as happy doing this as he had been in the public eye?
Trustpilot
Copyright © 2022 Thriftbooks.com Terms of Use | Privacy Policy | Do Not Sell or Share My Personal Information | Accessibility Statement
ThriftBooks® and the ThriftBooks® logo are registered trademarks of Thrift Books Global, LLC