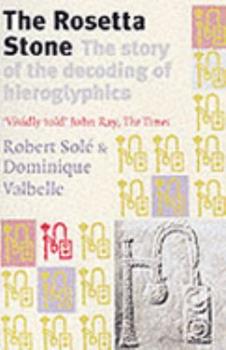 The Rosetta Stone : The Story of the Decoding of Egyptian Hieroglyphics

by Dominique Valbelle and Robert Solé

In July 1799, a French officer serving in Napoleon's Egyptian expedition unearthed a granite block bearing text in three different scripts -- Greek, demotic Egyptian, and hieroglyphics. Following the... This description may be from another edition of this product.

The birth of archaeological linguistics

Published by Thriftbooks.com User , 16 years ago
This book is highly useful to understand in plain language the real endeavour of archaeologists when confronted to the Rosetta Stone at teh beginning of the 19th century, to the various writing systems of the old dead Egyptian language. These archaeologists had to become linguists and that was difficult for them because they did not have the slightest idea of how a language can work. The first attempts failed because they did not take into account the fact that the signs they were trying to understand and identify were a writing system for a particular language that you had to visualize as a language in order to understand the writing system. The key for that was also to visualize the various uses and hence discursive situations that this language and its writing systems (there were three writing systems for the old Egyptian language before the final coptic one took over before Arabic arrived) were supposed to satisfy. The break-through effort came from Jean François Champollion who stated that after all the hieroglyphs were an overall alphabetical writing system. From there came the penetration of the language that today we know pretty well. This book is honest about the various contributions of different people at the time and the value of each one of them, with Champollion's attempt being the main step towards a full understanding of the language. The book also concentrates on the particular role of the Rosetta Stone and all the events happening around it, particularly the national embroglio between England and France as for the righteous ownership of it, only solved in 1972 after a discreet but effective intervention of Queen Elizabeth II. An essential book for those who want to understand how linguists decipher strange languages and how linguists reconstruct dead languages, but also how humanity invented writing systems corresponding both to the languages they transcribed and the uses they were supposed to satisfy. The methods have not basically changed since Champollion, and that must be his essential merit. Dr Jacques COULARDEAU, Université Paris Dauphine, Université Paris I Panthéon Sorbonne

The amazing and true story of the Rosetta Stone

Published by Thriftbooks.com User , 19 years ago
Collaboratively written by novelist and journalist Robert Sole and Egyptologist Dominique Valbelle (President of the French Egyptological Society), The Rosetta Stone: The Story Of The Decoding Of Hieroglyphics is the amazing and true story of the Rosetta Stone, from its discovery by Napoleon's army during their sojourn in Egypt, to how the Rosetta Stone became the key to deciphering ancient Egyptian hieroglyphics -- which had not been used as a written language for over fourteen centuries. An amazing saga about the reclamation of history itself, The Rosetta Stone is a highly recommended addition to both school and community library Archaeology and Egyptology reference collections.

Filled with insights and a sense of action

Published by Thriftbooks.com User , 19 years ago
The Rosetta Stone shares the history of the Rosetta stone that contained text written in early Greek, Egyptian and hieroglyphs enabling a link to a longlost language. From its discovery in 1799 to its theft from the French by the British army and the studies which have lead to earth shaking linguistic discoveries, The Rosetta Stone is filled with insights and a sense of action.

A quick, painless and engaging read

Published by Thriftbooks.com User , 20 years ago
I can heartily recommend this book. Combining the romance of the desert with a mysterious key to the past, accidentally discovered by a French officer in the Napoleonic Army...and it's all true! A good example of how real life beats out pale fiction. As a bonus, good information about ancient Egyptian life is to be found here...
Trustpilot
Copyright © 2022 Thriftbooks.com Terms of Use | Privacy Policy | Do Not Sell My Personal Information | Accessibility Statement
ThriftBooks® and the ThriftBooks® logo are registered trademarks of Thrift Books Global, LLC