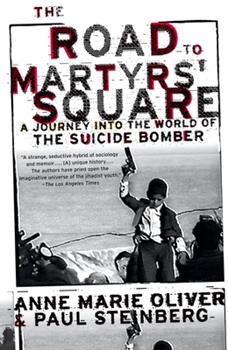 The Road to Martyrs' Square: A Journey Into the World of the Suicide Bomber

Don't expect to find here the usual cliches about suicide bombers and what drives them. In this unique study, Anne Marie Oliver and Paul Steinberg render the story of two intertwining, often clashing journeys. The authors lived for six months with a Palestinian refugee family in Gaza at the beginning of the intifada, and offer a gritty, poetic portrait of the time. They also provide an unrivalled documentary of the underground media they collected...

Published by Thriftbooks.com User , 14 years ago
This book is pretty much a fairly straight reporting of Palestinian cultural influences that produce what we read about in the news. Children growing up steeped in hatred and the sick machismo of the Palestinian Arab Muslim male. It's very sad and insurmountable problem that the Israeli's and the rest of the world face, basically an ignorant violent culture that isn't going away. The book documents this in an objective way. I gave it 4 of 5 stars because I believe it recorded the authors experiences truthfully. It is however somewhat overwhelming in the pure hate that you are constantly being bombarded with, and with no end in sight. This makes the book a bit depressing.

A scary look at suicide bombers

Published by Thriftbooks.com User , 17 years ago
This book shows how Arab society in the Levant has supported a culture of death and destruction. It shows the elements of the incitement and manipulation that create this culture. And it makes it clear that suicide bombings are not just a few acts of a small minority, but have become an inherent aspect of the overall community. It makes one sad to see all the destruction, and it makes one worried about the future of the Arab community as a whole, which appears to be its own worst enemy right now. Still, I had to take away a star from my rating. That is because the authors make a huge effort to be totally neutral in the Arab-Israeli conflict. They do not entirely succeed in this, but that isn't my complaint. My problem with this attitude is that neutrality between aggressors and victims is a stand in itself. Neutrality favors aggression and insanity, both of which need to be condemned severely. Arab aggression is not helping Arabs or Jews. It isn't helping the region to become more peaceful. Quite the contrary. Aggression needs to be opposed. And the authors ought to have done just that.

Published by Thriftbooks.com User , 17 years ago
Great book! I was captivated from cover to cover. It's great to read a gritty, realistic view of the beginings of the intifada.

A Passport into the Middle East Conflict

Published by Thriftbooks.com User , 17 years ago
This book is phenomenal! I have to say I never had any interest in traveling to the Middle East given all the unrest and turmoil that seems never ending. I never had a true understanding of the origins of the Israeli Palestinian conflict or what day-to-day living was like until I picked up The Road to Martyrs Square. Being a visual artist I was intrigued by the imagery and meanings. Oliver and Steinberg made me feel as though I was there with them walking through the shuq, living as an expatriate discovering fresh graffiti and getting inside the mind of the cult of the suicide bomber. It has truly changed my perspective. I hope there will someday there be peace and understanding in the region and I too will have the opportunity to walk the same streets with the knowledge of what used to be.

Published by Thriftbooks.com User , 17 years ago
This book provides unique insight into a mindset few can ever know. The reader is treated to a visual chronology of intifada graffiti that until now has remained an undocumented form of communication. The story of seemingly "random" markings on walls evolved into the unedited story of the intifada, beyond any censorship. The book also shows how religious zeal and political activism eventually became so interwoven that they produced a culture in which one's value is directly proportioned to the death and destruction one facilitates. The price of martyrdom is not only one's death, but also the maximizing of the body count. This book is a must-read for anyone with an interest in the Israeli-Palestinian conflict.
Trustpilot
Copyright © 2022 Thriftbooks.com Terms of Use | Privacy Policy | Do Not Sell My Personal Information | Accessibility Statement
ThriftBooks® and the ThriftBooks® logo are registered trademarks of Thrift Books Global, LLC