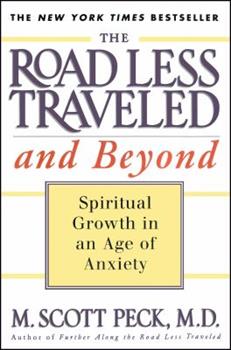 The Road Less Traveled and Beyond: Spiritual Growth in an Age of Anxiety

The culmination of a lifetime of Dr. M. Scott Peck's counseling, lecturing, and writing, and the conclusion of the classic bestselling Road trilogy, The Road Less Traveled and Beyond leads us to a deeper awareness of how to live rich, fulfilling lives in a world fraught with stress and anxiety. With the rare combination of profound psychological insight and deep spirituality that has already spoken to millions of readers, Dr. Peck talks about decision...

Published by Thriftbooks.com User , 15 years ago
Again M. Scott Peck has created a tool for discovering meaning in the complexity of life. There are answers to be found in the reading of this masterpiece.

It seems most of the reviewers missed most of Peck's points.

Published by Thriftbooks.com User , 18 years ago
It seems most of the reviewers missed most of Peck's points. I've read all of Peck's books, mostly in chron order, as they were releasted. It took great courage to write this "synopsis of my entire career." The biggest danger, of course (missed by most, it seems), is that ppl. would then read only this as a quick "cheat sheet" to all of his works -- then fail to go for the depth in each of those. No doubt Peck would, however, affirm this as a "legitimate" shortcut -- as he discourses about in the orig. TRLT. THE POWER (w/out braggadocio -- which is likely why most readers seem to have missed this point) of Peck's continual self-referencing over HIS PAST 25 YEARS (TRLT just celebrated that anniversary as one of the most-read books this planet has ever seen; quite a feat in itself; tho, since that's only circa 10M books, it's not something our planet should be much proud of) is not: "Hey, read all the rest of my books." It's: "Hey, these TIMELESS TRUTHS I've been discussing for 25 YEARS are, indeed, STILL TRUE." Don't miss this fact. The work holds up. Let's see if Bill Gates' software does 25 yrs. from now. It's hugely courageous to come out AGAINST simplism, and FOR the intellect -- as it's so rare nowadays in our disgustingly 4-second-attention-span culture. It's not exactly what will endear you to life's perennial "H.S. Popularity Contest" -- that the immature masses spend their lives aspiring to. But it's what I'd expect of a master like Peck: throw yourself on the sword of "offending the sensibilities" of the masses, as long as it's really for their own good (and not just lying that it's so), and ignoring your "relative comfort" -- and be willing to suffer for it. (Even your "fans" might be "irritated" if they misunderstand and only think "you're trying to sell more books.") Again, more of Dr. Peck proving his own case by "walking his own talk" from the 25 yr. old TRLT. I used to recommend other of Dr. Peck's books -- but now ALWAYS recommend this FIRST. (Apart from the other reasons I've already made apparent -- in TRLTAB continually references EVIL, something of a missing flaw in the orig. TRLT. But, of course, greatly made up for in his then quickly writing POTL.) PRINCIPALLY B/C LIFE IS SHORT. AND THERE IS NO TIME, NOR SENSE, NOT TO SEND ALL "NEWCOMERS" TO THE TREASURE TROVE FIRST, then let them discover the depth at their leisure and own scheduling. "LIFE IS AN EMERGENCY." -- Helen Keller "THE ONLY GOOD IS KNOWLEDGE, AND THE ONLY EVIL IS IGNORANCE." -- Socrates "THE MAJORITY OF THE STUPID IS INVINCIBLE, AND GUARANTEED FOR ALL TIME." -- Albert Einstein TIMELESS TRUTH, ANYONE?

Published by Thriftbooks.com User , 18 years ago
An irreverent look on the truth and reality that you may not "like" to hear but certainly pushes the limits of thinking more deeply... beyond the simple "easy" way seeing why we do the things we do. Challenging the reader to rise above tradition to New Schools of Thought.

Not your average "self help" book!

Published by Thriftbooks.com User , 18 years ago
Which, I must admit, I thought it was when I first picked it up. I enjoy reading them, but self-help books can be shmaltzy and full of vague therapy speak. This is not. It is an intelligent, clear, down to earth and very insightful book which deals with big issues that other books ignore. It is the only book that I have come across that admits to not knowing why some people suffer incrediable trauma and yet escape the 'neurosis' they are supposed to devolop. M. Scott Peck does not act as if he knows everything about how to live a perfect life, but he tells you what he knows and throws around some questions with clarity. I loved this book and couldn't put it down!

Fast Forward through some parts

Published by Thriftbooks.com User , 21 years ago
I enjoyed this book! I am very interested in change- why some are willing to and some resist it. Peck's views on change were insightful. I totally agree with him concerning the issue of simplistic thinking, too. I have struggled with organized religion-couldn't take the confines of it and truly knew that I could think for myself and didn't need a doctrine of an organization to guide me- I can connect directly to God. His views on the Stages of Spiritual Growth helped me. Although I had read about this topic in other books-his "way of putting it" finally helped me sort it all out. I did find he refered to his other books too frequently and it was distracting. I finally just skimmed (fast forwarded) to the parts more interesting to me. I would reccommend this book to those further along the "road less traveled".
Trustpilot
Copyright © 2022 Thriftbooks.com Terms of Use | Privacy Policy | Do Not Sell or Share My Personal Information | Accessibility Statement
ThriftBooks® and the ThriftBooks® logo are registered trademarks of Thrift Books Global, LLC