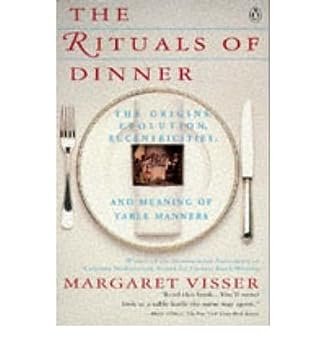 This description may be from another edition of this product. With an acute eye and an irrepressible wit, Margaret Visser takes a fascinating look at the way we eat our meals. From the ancient Greeks to modern yuppies, from cannibalism and the taking of the...

Published by Thriftbooks.com User , 11 years ago
Margaret Visser writes on this quotidian activity with astonishing erudition. Her survey of our eating habits is global, spanning numerous societies, and she draws from all periods of our historical development. (There are roughly a thousand entries in her bibliography.) She reminds me of Simone de Beauvoir, whose also has a humbling erudition, and who used it to address the subject of woman's role in society, as well as aging. Visser draws the reader in with the antithesis of the Emily Post approach; she details the cannibalistic practices of the Aztecs, as they were first revealed (and experienced) by Spanish explorers / conquistadors. The author devotes the first couple of chapters to our acculturation, drawing lessons from how monkeys learn to wash potatoes. She points out that children are "brought up," a passive construction, and taught the norms of social behavior. For some small segments of society, it is a never ending process; there "manners" are what set them apart from others, and re-enforce their power; others continue to try to break into society (p 69). Power relations surrounding food are just one of the recurring themes in this book. Consider: "In the modern world, where openly stratified hierarchy is an affront to the egalitarian myth, people are rarely permitted to display naked social ambition; snobbery must go decently disguised as creativity, free choice, good taste, and so forth. (p. 100). In the postscript she ruminates on the concept of "no time" in society today, and says: "Powerful people love impressing upon those needing their services that they have trouble finding time `to fit them in': making others wait because one's own time is more precious than theirs is one of the great hallmarks of desirability and success (p. 353)." Visser's book is also an etymological discourse; time and time again she explains the origins, as well as the associated connotations of words, such as the Latin word for a hearth or fireplace, which is "focus." She includes numerous wry observations, such as: "A Freudian analysis of the knife, fork, and spoon gives the spoon the female role in the trio; the fork, if I understand the writer correctly, is the male child of the knife and the spoon, and, like a little Oedipus, resentful of the knife, and jealous of the spoon.) She even worked in the old quip about a certain insouciance towards formal manners, with the proverbial Canadian waitress advising British royalty: "Keep you fork, Duke, there's pie." Usually serious, but occasionally light-hearted, there are ample conversation starters for a decade's worth of dinner parties, and may even help you win at "Jeopardy," as one reviewer noted. I also noted that two reviewers indicated serious mistakes in this book, one concerning Chinese meals, the other Jewish holidays. That may be so; it would be surprising given the scope of this book, and hopefully the author would comment on these assertions. I found none, however, and remain grateful for

Published by Thriftbooks.com User , 11 years ago
I saw this book advertised as one to give to "The person who has everything". I gave it to my parents and they loved it! I read it myself and had a ball learning all the tidbits and trivia surrounding some of our most basic rituals of everyday life. I love history and anthropology. Not having a formal background in this subject, I found this book a delight to read. It's like a PBS special in print! I strongly recommend this book. A former review objected to Ms. Vissar's connections between Judaism and Christiantity. I think her interpretation is different from what Ms. Mead was conveying. The focus is not on the specific beliefs - but the anthropological connections that humankind share - more on HOW we celebrate (lying/leanin around the dinner table (forgive my wording) vs. sitting in upright chairs or cross-legged.) That's the fun part! Who would think???? OH!!!! A nice change of pace and wonderful book. Her other book Much Depends on Dinner: The Extraordinary History and Mythology, Allure and Obsessions, Perils and Taboos of an Ordinary Meal is another fun and eye-opening view of where some of our choices derive. Both books are like a scrumptious dessert at the end of a feast!

Don't Judge a Book by its Cover

Published by Thriftbooks.com User , 20 years ago
I can't imagine doing the research for this tome. And I don't use the word tome lightly. This book is chock full of little tidbits of trivia that are fascinating, but that you will probabaly never need nor have an opportunity to share. What is the origin of the word, 'menu?' How did the fork evolve; how did table cloths come into use? "The ritual of Dinner" digs down to the tiniest of details, the most remote possible history and the widest variety of customs. If you expect such questions when you appear on Jeopardy, or when quizzed by your mother-in-law to be, this book is thorough and very well written. My, is it thorough!But, is this the information that you seek? I was looking for a book that went into more detail than Amy Vanderbilt in the proper placement and use of dishes, utensils and glassware. I wanted to know the difference between a 'rim soup' bowl and a 'cream soup' bowl, and which spoon goes with which dish as well as which type of soup. Although some of this book was fascinating reading, it didn't really answer my questions. Well, maybe some of them, but you have to research and work at finding any guidelines. Visser insists that you learn the why and history of a ritual before letting you in on it's current practical use, and how it may be applied.If you are not a museum curator and just want to set a proper table, I suggest you turn to "The Art of the Table" by Susanne Von Drachenfuls instead. And no, I'm still not sure about the soup bowls.

Exploration of table manners thru-out time and the world.

Published by Thriftbooks.com User , 23 years ago
This is a fascinating book. Everyone who reads a bit of it wants to own it. You can learn lots of trivia and impress your friends as well as develop a whole new outlook on food, eating, dinner parties, etc.
Copyright © 2020 Thriftbooks.com Terms of Use | Privacy Policy | Do Not Sell My Personal Information | Accessibility Statement
ThriftBooks® and the ThriftBooks® logo are registered trademarks of Thrift Books Global, LLC