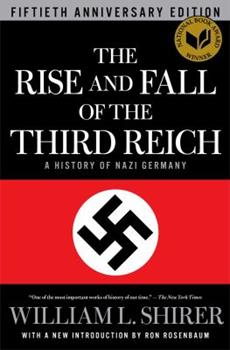 The Rise and Fall of the Third Reich: A History of Nazi Germany

The fiftieth anniversary edition of the National Book Award-winning bestseller that is the definitive study of Adolf Hitler, the rise of Nazi Germany, the Holocaust, and World War II. This special edition now features a new introduction by Ron Rosenbaum, author of Explaining Hitler and How the End Begins . No other powerful empire ever bequeathed such mountains of evidence about its birth and destruction as the Third Reich. When the bitter war was...

Published by LowModernist , 7 months ago
Really good. I had listened to the audiobook a few times, but got a hard copy to do some highlighting. Should be a movie.

Published by TexasReader , 2 years ago
I have read this excellent important book before on Kindle and wanted a good copy for rereading and sharing. I received a dirty tattered copy that is disappointing.

Published by Thriftbooks.com User , 22 years ago
I've read this book a couple of times now. Each time I'm struk by new details and thoughs over the past. There is a lot of "What-If's" over the whole third Reich. This book illustrates in a convenient detailed level of the whole history from Hitlers young days as a stray in Wien until his death in Berlin 1945. As a reference the book is splendid. I have read a couple of other documents from WW2, I always discover that I can go back to this book to get more informationConsidering this book was written before any of the "Spandau 7" was released (and able to release thir Memoars) its a quite accuracte hostorical document. Although for instance Albert Speer's books provied with more details from his "small world".

If You Read Just One Book About Nazi Germany....

Published by Thriftbooks.com User , 22 years ago
This should be the one. William Shirer's comprehensive treatment of the curious rise and horrific fall of the Nazis in post-Weimar Germany is the benchmark volume to measure all other treatments of the era by. There are so many monographs on Nazi Germany that one reels before the list looming in a relevant bibliography. Save yourself the trouble; this book gives one exactly the kind of complete immersion in and coverage of the realities of the era that too many of the other books lack. Shirer, an American journalist stationed in Berlin as a newspaper (and later radio) correspondant during the rise of the National Socialists, was there, on the ground and at the scene witnessing many of the events he describes in such detail. He has, of course, written extensively on these experiences, both herein and elsewhere in books like 'The Nightmare Years' and 'Berlin Diary'. But this book has to be considered his masterpiece, and is worth the time, trouble and price for this hefty best-selling volume. After all, it has never been out of print in the forty years since its original publication in the early 1960s. I promise that if you read this, you'll never think of World War Two in the same way...

You cannot understand todays world events without this book.

Published by Thriftbooks.com User , 23 years ago
My parents bought this book when it first came out, about 1960, and I struggled to read it cover to cover and eventually finished it. I was eight years old. This may seem amazing to some of the high school students who have reviewed this book as "boring", but it amazed and frightened me. What kept me reading was the vividly portrayed methodical and unfolding horror in Europe that I had known nothing about (what eight year old does?) I'm sure that I missed a lot on my first reading, but I remember that first reading vividly even today. The reason this book is a "must read" is that today's tyrants, today's wars and today's massacres follow much the same script. I believe that most tyrants are often also fanatic students of history for "how to" guides to achieving their aims. Those they would enslave should be equally diligent. The book is sometimes disparaged for its long quotes of previously secret Nazi letters, memoranda and cables, but it is precisely that detail that stays with you for life. You will never read a bland government white paper again without scanning it for the incredible couched in passive, obfuscatory language. I have read a great deal more history since then, and have read many books on military tactics and strategy from ancient times to the present, but I have never read a better portrait of a world gone crazy. Military strategists can only tell you how. This book tells you why by someone who was there when it happened.Obviously there have been further revelations since this book was published in 1960 based on declassified and more recently translated documents, but this book stands the test of time in that such revelations supplement but do not undermine its veracity.

One of the best books I've ever read

Published by Thriftbooks.com User , 23 years ago
Don't be intimidated by the 1100+ pages of "The Rise and Fall of the Third Reich." It reads more like a novel than a dry historical narrative and -- trust me on this -- this book is awesome.As a reporter for CBS, William Shirer lived and worked in Germany during much of the Nazi movement. Until he left in 1940, he saw firsthand Hitler's rise to power, the consolidation of that power, and the use of that power. As a fallible human being, his prejudices may show through at times, but this is not necessarily a weakness. In today's climate of political correctness, works by historical revisionists -- that purport to show that Hitler and the Nazis weren't so bad -- are not only published, but they're even taken seriously. Perhaps our modern view of Hitler has been distorted by allied propaganda and Hitler and Goerring were fun loving and lovable guys, they say. At the extreme, some revisionists even claim that the Auschwitz death camp didn't even have gas chambers - they were added later as a tourist attraction! Yeah right.In that sense, Shirer's book, published in 1959 is refreshing. He doesn't hold back one bit with his opinions.Hence, Quisling is "pig-eyed", Rohm is a "pervert", Goebles is "dwarfish", Goering is "corpulent", Ribbentrop is "vain as a peacock", Brauchitsch is "unintelligent", Eva Braun has the "brain of a bird", and so forth. Such epithets may offend the sensibilities of some modern day readers, but they certainly spice up the telling of what could otherwise be a boring tale. (If you don't know who these people are, buy the book. Believe me, if you read it all the way through, you will become a formidable expert in Nazi trivia).Because "The Rise and Fall of the Third Reich" was finished a mere 14 years after the fall of Nazi Germany, some facts that have come to light after its publication are necessarily missing. The premier example of this would be the breaking of the secret Nazi military codes by the British. But writing this book in 1959 also had its advantages. Many of the participants were still alive when William Shirer was doing his research. Hence, when encountering a slight inconsistency in General Franz Halder's war diary [The Chief of Staff of the High Command (the OKH)], William Shirer wrote to the old General and received "a prompt and courteous reply."Perhaps Shirer's most vivid firsthand account of all is the several page description of the French surrender in the rail car at the forest at Compiegne:"I look for the expression in Hitler's face. I am but fifty yards from him and see him though my glasses as though he were directly in front of me... He glances slowly around the clearing, and now, as his eyes meet ours, you grasp the depth of his hatred."Amazing stuff.But these personal accounts only take up a very small portion of this absolutely fantastic book. Particularly well covered was Hitler's rise to power -- a story that is not often told. The Hitler that Shirer paints duri
Trustpilot
Copyright © 2022 Thriftbooks.com Terms of Use | Privacy Policy | Do Not Sell My Personal Information | Cookie Preferences | Accessibility Statement
ThriftBooks® and the ThriftBooks® logo are registered trademarks of Thrift Books Global, LLC