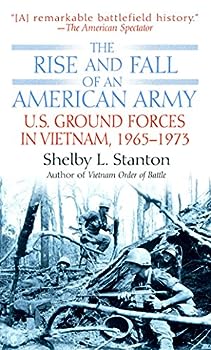 An important, one volume history of the war in Vietnam "THE MEN WHO SACRIFICED FOR THEIR COUNTRY ARE RIGHTFULLY HERALDED . . . This is an honest book-one well worth reading. . . . Stanton has laid his... This description may be from another edition of this product.

Published by Thriftbooks.com User , 16 years ago
The Vietnam War is probably the most maligned, misunderstood, misrepresented, and misreported conflict in military history. Readers who wish to clear their minds of the perpetual cacophony of nonsense surrounding it must turn to a qualified source. Shelby Stanton -- military historian and decorated veteran, Infantry Officer, Ranger, Airborne, and Special Forces in Vietnam, is a qualified source. Stanton turns his untinted glasses to the conflict in a very scholarly, soldierly manner. The history is primarily engagement-oriented, but weaves these engagements into a backdrop of policy, system-wide challenges, political fiascos, and cultural difficulties. Stanton covers every major engagement during the war with as much precision as possible for a single volume. He meticulously lists regiments, battalions, companies, squads, etc. before he commences a vivid description of combat. Particularly critical actions by individuals are also mentioned. The author does not whitewash low points in military conduct. He discusses the poorly-led Americal division, members of which were responsible for My Lai. Substance abuse by soldiers (particularly toward the latter end of the conflict), demoralization and insubordination prior to demobilization and cover-ups in the chain-of-command all receive treatment. However, Stanton places these problems in perspective and is, above all, fair to the men who served. The simple fact is that the vast, overwhelming majority of troops served honorably, steadfastly and often heroically. In almost no circumstance where the NVA/VC able to hold captured targets for any length of time, and only rarely were they able to overwhelm an entire position. Casualties experienced by the NVA, as best as can be ascertained, outnumbered ours dramatically (a figure given is 500,000 NVA/VC, by an NVA general to journalist Oriana Fallaci). In fact, the use of casualties as a benchmark for successful engagements was one of the problems that (Stanton points out) led to My Lai. Other benchmarks were hard to come by, however, given the "Total War" strategy that deemphasized holding strategic terrain. Ultimately, the failure to achieve policy objectives in Vietnam rested with political decisions and lack of American will. From a tactical perspective, US Forces on the whole performed admirably -- repulsing Tet and Mini-Tet, winning the "Big Battles" of 1967, and so on. Rise and Fall is well-written and manages to engage the reader despite the precision. It contains numerous maps by the author as well as illuminating photographs from his collection. A history that will stand the test of time.

Published by Thriftbooks.com User , 16 years ago
Having lived through the time covered in the book, as either a member of the Army or an "Army Brat", this is the truth. My copy has notes for my kids on what it was like to see this happening. This book is honest, truthful and pulls no punches. This is a "must read" if you wish to understand these times.

It has some good points

Published by Thriftbooks.com User , 16 years ago
There is a large cloud over this author because of his conduct. But none the less, I enjoyed this book and think its worth the effort to keep an eye & mind open and read the book.

Published by Thriftbooks.com User , 17 years ago
This is a greeat book, though not a perfect one - but certainly a welcome and necessary addition to any Vietnam era reader. Stanton is not really concerned with politics of strategy, only the performance of the Army and Marines in combat in Vietnam and, more unusually, how the Regular Army reacted to the war. Densely written and without enough maps, it certainly is a bit difficult to read, but it is worth it. He covers all of the major operations and battles of the war, including the ones usually ignored by historians. Stanton unfortunately has a strong bias against the ARVN and doesn't bother to conceal it.
Copyright © 2022 Thriftbooks.com Terms of Use | Privacy Policy | Do Not Sell My Personal Information | Accessibility Statement
ThriftBooks® and the ThriftBooks® logo are registered trademarks of Thrift Books Global, LLC