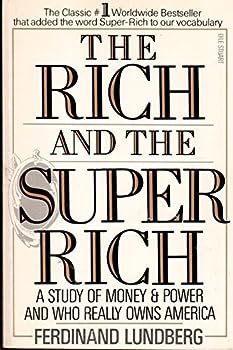 The Rich and the Super-Rich: A Study in the Power of Money Today

Thirty years ago, a bombshell of a book appeared which told the story of the lords of wealth and their glittering clans. It was called America's Sixty Families. It rocked the nation and became a... This description may be from another edition of this product.

Published by Thriftbooks.com User , 14 years ago
As a previous reviewer noted, The Rich and Superrich is a very readable book despite its size. It is very edifying to see the money power structure in the US. Ferdinand Lundberg was a brilliant scholar and writer, living from 1905 to 1995. I would also recommend his previous book, written in 1937, but reissued in 2007--America's 60 Families. From this one can see that the concentration of power is nothing new. I would recommend two more books that show how democratization of the US economy can be achieved. I would also recommend Thom Hartmann's books on the constitution, which explain all the obstacles to a true democracy put in place by our founders. The US constitution was a compromise between those who wanted a plutocracy (Adams and Hamilton, for example) and those who wanted a true people's democracy (Franklin, Jefferson, Thomas Paine). We must remember that the US was the first modern democracy. Unfortunately, the compromises our founders made has led to a plutocracy, rather than a democracy. I also recommend: SHARING THE PIE by Stephen Brouwer, Owl Books. Sharing The Pie "Offers a far more lucid presentation of economic trs than you are likely to find anywhere."--Barbara Ehrenreich Even though it was published in 1998, the material is still relevant since it analyzes the structure of the economy, rather than the current picture of who owns what. As one reviewer noted about Sharing The Pie, it is an invaluable resource for those who want to make sense of the economy, Sharing the Pie is also a passionate plea for greater economic equality and a revitalization of American democracy. As recently as 2004, a reviewer noted Sharing The Pie "gives a good history of how America's economy has gotten to the point it is now and where it may be going in the future."

Published by Thriftbooks.com User , 14 years ago
This book is old but I have no doubt that nothing much has changed. When you start asking "where's the money" you invariably end up reading books like Mr. Lundburg's. This book and this author should be considered as companion volumes with Gustavus Myers and his History of Great American Fortunes. These two authors provide a tremendous arsenal of information, facts and figures supporting the case against the "Rich and the Famous". We all aspire to one day becoming rich and famous but when and if you get there you certainly do not want to continue the customs and traditions of your predecessors - not if you aspire to living in a "better world" at least. Both of these authors need to be reprinted. Their books are disappearing fast and they are a very important part in the process of presenting a balanced historical picture for future generations. Books written by Richard Noble - The Hobo Philosopher: "Hobo-ing America: A Workingman's Tour of the U.S.A.." "A Summer with Charlie" "A Little Something: Poetry and Prose" "Honor Thy Father and Thy Mother" "The Eastpointer" Selections from award winning column.

Published by Thriftbooks.com User , 18 years ago
Mr. Lundberg's deconstruction of the relationships of powerful families in the United States is fascinating reading. Power seeks power incestuously and the web of power isn't just wealth. It is boards of corporations, memberships in clubs, and the bonds of marriages. This isn't just a screed against money; it is an anthropological study of the rulers of this country. They seldom seek publicity. That would be so nouveau riche. Even though this is a snapshot taken in the middle of the last century, the social structures revealed had been established since the beginning of the Republic and there is no reason to doubt that they persist today. Read and learn.

The ultimate reference for billionaires

Published by Thriftbooks.com User , 22 years ago
The more things change the more they stay the same. What we really need is for Ferdinand Lunberg to give us an up-to-date version. This book showed us where all the money was and how they kept it and controlled it. If you are a capitalist, you will want to read this and will want an updated version. Incredible new fortunes are being made today, but what happened to all the old money?
Copyright © 2022 Thriftbooks.com Terms of Use | Privacy Policy | Do Not Sell My Personal Information | Accessibility Statement
ThriftBooks® and the ThriftBooks® logo are registered trademarks of Thrift Books Global, LLC