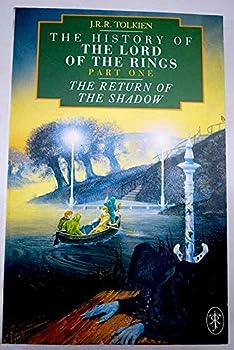 In this sixth volume of The History of Middle-earth the story reaches The Lord of the Rings. In The Return of the Shadow (an abandoned title for the first volume) Christopher Tolkien describes, with... This description may be from another edition of this product.

Vital exploration of Tolkien's work, but for fans only

Published by Thriftbooks.com User , 18 years ago
If you're not a Tolkien fan, you need not apply to the sprawling History of Middle Earth series. But if you're interested in seeing how the Professor developed the rich creation of Middle Earth, warts and all, this is a treasure trove of material.The 12 volumes of the History of Middle Earth take a close look at the creation of Tolkien's greatest achievement - Middle Earth itself - through early drafts, unpublished texts, and dead end writings. For ardent Tolkien readers it is a fascinating look at one of the great literary creations of the 20th Century. For more casual fans, it's text better left unread."The Return of the Shadow" marks the first in the four volumes dealing with the history of the writing of "The Lord of the Rings." Like the other volumes in the series, it features unpublished writings by Tolkien, supplemented, explained, footnoted, annotated and expounded upon by his son, Christopher Tolkien.Here we have the earliest versions of what would later become the most beloved fantasy epic in the world, detailing the extraordinary and convoluted history of the earliest chapters of "The Lord of the Rings." Some readers might be surprised to know just how different a book this was in its earliest stages, and just how much Tolkien was making it up as he went along in those early days.The wealth of information is fantastic, and Christopher Tolkien goes to great lengths to examine each text, putting them in the context of the larger puzzle of his father's writings. The exploration of how "The Lord of the Rings" came about is fantastic - for those interested. Otherwise, it will bore. This is, after all, a series of unfinished draft chapters and essays on the text. I enjoyed it, but many won't.Anybody wishing to do a study of Tolkien's craft, into "behind the scenes" writings, or just interested in finding a few snatches of new Middle Earth material (even if in unfinished form, there are some scattered throughout the series) will certainly find what they are looking for here. Christopher Tolkien's work here is appreciated by scores of ardent Tolkien fans.Those looking for fresh new tales about hobbits and heroes, however, will be disappointed. This isn't new fiction, nor does it even feature finished works. Seek elsewhere if you are looking for more tales in the way of "The Lord of the Rings."

Published by Thriftbooks.com User , 19 years ago
Of the thrilling and informative History of Middle-Earth series, this is perhaps the most interesting part. Normal Tolkien fans will get the rare chance to see how the germ of an idea can explode into the most complex cosmology ever created. Although it may seem boring, as it is not a novel per se, it is an insightful analysis of a very beloved book. The Lord of the Rings was initially conceived as a sequel to the Hobbit, growing into something incomparably more vast. We see Bingo in the character of Frodo, the name Frodo applied to another character. Aragorn is named Trotter and the idea emerges that he might be a long lost Hobbit who has had many experiences on the road. Somehow, with many footnotes and comments in the margin, we see the evolution of these ideas into what we know today as LOTR. Fascinating and useful for the Tolkien scholar, the devoted Tolkien reader, or even an aspiring writer.

A must read for aspiring writers.

Published by Thriftbooks.com User , 19 years ago
In the forward of the Return of the Shadow, Christopher Tolkien writes "My father bestowed immense pains on the creation of The Lord of the Rings, and my intention has been that this record of his first years of work on it should reflect those pains." Well he has succeeded immeasurably. By taking the time to sift through all the old manuscripts, some only half finished and written in fading pencil, and putting them into a coherent order Christopher not only tells the story of how the Lord of the Rings came to be, but he provides aspiring writers like myself with a textbook, if you will, on how great books are written. As the quote above implies, writing a story can be like an intellectual child birthing during which the writer experiences great pains and frustrations to achieve what he hopes will become a wonderful new creation that others will enjoy. Perhaps the realization that a master storyteller and obvious genius like J.R.R. Tolkien first put pen to paper without even knowing what the story would be about, or where it would go, and then suffered through hundreds of revisions, alterations, and conflicting ideas to produce his masterpiece of literature should not be surprising. But it is, and therefore, such knowledge is a great encouragement for some who is currently going through the same process. Thank You very much Christopher Tolkien for this wonderful work.

Published by Thriftbooks.com User , 21 years ago
. . .for anyone who wants to understand the thought processes behind the greatest exercise in fantasy fiction of all time.In preparing this volume (and the others in the series) Christopher Tolkien has permitted us access to the inner workings of his father's thought, as the story which ultimately became "The Lord of the Rings" gradually evolved and took shape.Any aficionado of "The Lord of the Rings" will delight at the early character portrayls of characters like Farmer Maggot and Treebeard (and not the least, Trotter the hobbit whose character ultimately morphs into that of Aragorn).This book is also highly recommend for any student of language and literature and any budding novelist. Thank you, Christopher, for your labor of love on behalf of your father.

A great book for LOTR fans

Published by Thriftbooks.com User , 23 years ago
In the sixth volume of The History of Middle Earth, Christopher Tolkien begins to show us the developement of The Lord of the Rings. This volume reaches the point where Tolkien himself stopped his writing for a long time--the Mines of Moria. Although most of the basic themes remain the same throughout Tolkien's creation, one difference in the early version certainly stands out. Not only is there no mention of the Dunedain, but Aragorn himself is now a hobbit called Trotter whose real name is none other than Peregrin. Also, many of the hobbit names were different and continued to shift back and forth until the present names were finally accepted. I recommend this book to all Tolkien fans, but especially for those who loved LOTR.
Trustpilot
Copyright © 2022 Thriftbooks.com Terms of Use | Privacy Policy | Do Not Sell My Personal Information | Accessibility Statement
ThriftBooks® and the ThriftBooks® logo are registered trademarks of Thrift Books Global, LLC