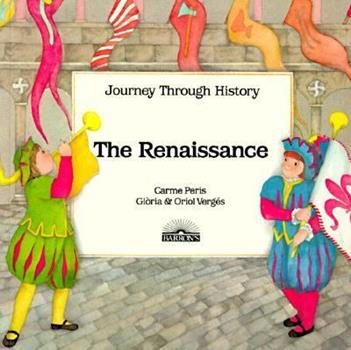 The Renaissance (Journey Through History) (English and Spanish Edition)

(Part of the Journey Through History Series)

This description may be from another edition of this product. An illustrated history of the Renaissance period, with a fictional story involving children to depict the time in history.

Encouraging younger students to study the history of the Renaissance

Published by Thriftbooks.com User , 15 years ago
The Journey Through History series consists of six books written for young readers that are designed to encourage their interest in the study of history. What is interesting about them is that they were originally published in Spain ("Edad antigua"), which provides for a slightly different perspective on the past that you get from American historians. "The Renaissance" is the fourth volume, following "Prehistory to Egypt," "The Greek and Roman Eras," and "The Middle Ages." What authors Gloria & Oriol Verges do in this series is to follow groups of children during a specific period as a way of touching on topics of historical interest and significance. So we begin with a couple of young children who get to listen to poetry in their own language (instead of Latin or Greek), check out the achievements of Leonardo da Vinci, and look at books being printed with moveable type. Each of these topics is covered in a two-page spread consisting of an illustration that covers more than one page and several paragraphs of simple text. Other pages are devoted to the Vatican, the sculptures of Michelangelo, and Christopher Columbus. This allows a nice transition to a couple of young kids living in one of the great Native American cultures, before returning to Europe and other aspects of the Renaissance. The back of the book includes a guide for parents and teachers that focuses on the various topics covered it the text from Humanism and the idea of the "Renaissance Man" to what was happening with religion and literature as represented by key figures such as Martin Luther, Miquel Cervantes, and William Shakespeare. There is not a lot of details here, but young readers will get a sense for some of the key defining elements of the Renaissance. Consequently I find these to be nice little supplemental volumes to the study of the Renaissance for young students in grade school. The focus is on defining elements of the culture and reinforcing those. Students can get more details from other sources. The final pair of volumes in the Journey Through History series are devoted to "Modern Times," and "The Contemporary Age." All six of the books are written by Gloria & Oriol Verges, with Carme Peris illustrating the even numbered books, including this one, and Maria Rius providing the art for the odd numbered volumes.
Copyright © 2020 Thriftbooks.com Terms of Use | Privacy Policy | Do Not Sell My Personal Information | Accessibility Statement
ThriftBooks® and the ThriftBooks® logo are registered trademarks of Thrift Books Global, LLC