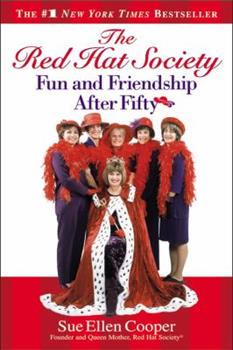 The Red Hat Society: Fun and Friendship After Fifty

Encourages women over the age of fifty to have fun and find kindred spirits while discussing such topics as marriage, children, grandparenting, retirement, and the physical, mental, and emotional effects of aging.

Published by Thriftbooks.com User , 18 years ago
To say that The Red Hat Society is an official handbook would be contradicting the spirit of Red Hatting. Red Hatter founder, Red Hat Society author and Queen Mother Sue Ellen Cooper and her crimson chapeau sisters, eschew the notion of Robert's Rules of Order. This delightful book introduces us to Ruby RedHat, who acts as gleeful mascot for the entire Red Hat Society, founded by Cooper. The whole thing has a great "Lifetime" ring, without man-bashing since several husbands, fathers, sons, and even one polite five-year-old boy fully support red Hats in all their red, red, and red glory! There's a definite sisterhood and joie de vivre in the way the Red Hatters describe their fundamentals--emphasis on the "fun"--and the touching way they support each other through life's ups and downs (navigated, no doubt, in a red and purple balloon). At a time when so-called role models get younger and sillier, the Red Hat Society shows us that to be older and sillier is better...because you've earned it. The book makes you want to grab your red or pink hat, go thrift shopping, and celebrate yourself. The book provides a practical and fun guide to joining or starting your own chapter. Women under fifty can join as Pink Hatters wearing lavender. Sing me up!

Published by Thriftbooks.com User , 18 years ago
Not bad reading.....I am a red hatter and so may be a little bias...But it pretty much says it all...We do have fun, well some of us do....lol....Majority of the women are fun, loving and just wonderful women to know and visit with. It is and should be about sharing and comaraderie amoung women of our later years. Sue Ellen did what most of us only wish we would of done and take it and make it come to life for us.... There is good and bad in everything...Some will like it and some will not. For me....I love it....It is good to be 50+.

Fun for those who seek an occasional celebration

Published by Thriftbooks.com User , 18 years ago
This is a fun book for those women who are stuck in a rut and need an excuse to celebrate or get out of the rut. For me it was more a book about making a hobby out of being fun, wild and on occasion celebrating being age 50+. Be an Outrageous Older Woman by Ruth H. Jacobs is the book I recommend for those women who are serious about living a 'march to your own drummer' lifestyle rather than making being age 50+ an occasional celebration. Personally I have few female friends and the ones I have I hand picked specifically because they live authentic, eccentric lives where everyday is a celebration, where the gathering of the women isn't about playing tea time, gossiping or shopping, but serious, wonderful thought provoking verbal intercourse.

You'll Have a Great Time Reading This One!

Published by Thriftbooks.com User , 18 years ago
THE RED HAT SOCIETY is a book about fun, loads of it. Sue Ellen Cooper, in her thirties, was inspired by a lyrical poem she read in a used bookstore. Years later, she recalled the piece that celebrated the aging process. Cooper searched for the perfect gift for a dear friend about to celebrate her fifty-fifth birthday. A framed copy of the poem, along with an outrageous red bowler, matched her friend Linda's personality. The gift was an instant hit. Soon, Cooper's entire list of friends benefited from like remembrances. A tearoom excursion in 1998, captured on film by Cooper's husband, was the first of many romps in hilarity for the over-fifty girls. The embryonic Red Hat Society bloomed into a sisterhood for like-minded lovers of foolishness.THE RED HAT SOCIETY is the story of its mushrooming into viable groups spread over the entire globe. A worldwide entity, The Red Hat Society now meets annually, for a convention of mutual fun-lovers. The rules are simple; there are none. The sole purpose is to revolutionize the view of feminine aging in our society. Cooper states that the society fulfills certain needs: "the need to play, the desire to dress up, the need for connection with others at the same stage of life, an appreciation for humor, visibility as an active segment of society and the need for fellowship with other women."The frisky official mascot of the society is Ruby Red-Hat, a full-figured little lady, cleverly disguised as an adult. A computer-generated icon, she is the embodiment of attributes and attitudes that Red Hatters admire. Her Ten Rules for Living, plus One, is the sole set of rules that Red Hatters accept. The book examines each with several paragraphs of explanation. Additional boxed quotations by authors and famous personages underscore Cooper's strong feelings about life as a celebration.THE RED HAT SOCIETY expands the roles of women to learn from their past roles in living and to bring experiences from those pasts into the present. Marriage, motherhood, caregiver, angel, grandmotherhood, careers, volunteerism and sisterhood extend into later years as the basis for renewed growth, if the sisterhood's spirit so moves. Red Hatters have the option to take up worthy causes or not. The book's middle chapters examine the process of aging --- physical, mental and spiritual. Red Hatters assume the task of enriching one another's lives as a worthy goal.Cooper expresses the need for the society to remain true to its origins. Men may observe the fun and frivolity their wives have and desire to become part of it. But men are not admitted. Neither are women under fifty. However, if these ladies form junior adjuncts to the club, they are called Pink Hatters. They're relegated to wearing paler shades of pink and lavender, to attain full red and purple regalia upon reaching fifty.During my reading of THE RED HAT SOCIETY, I dined at a local restaurant with a few friends. A back door swung open from a private dining salon. The parade of lad
Trustpilot
Copyright © 2022 Thriftbooks.com Terms of Use | Privacy Policy | Do Not Sell My Personal Information | Cookie Preferences | Accessibility Statement
ThriftBooks® and the ThriftBooks® logo are registered trademarks of Thrift Books Global, LLC