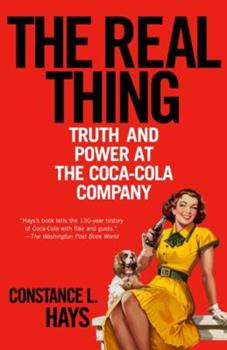 The Real Thing: Truth and Power at the Coca-Cola Company

The Real Thing is a portrait of America's most famous product and the people who transformed it from mere soft drink to symbol of freedom. With fresh insights and a penetrating eye, New York Times reporter Constance L. Hays examines a century of Coca-Cola history through deft portraits of the charismatic, driven men who used luck, spin, and the open door of enterprise to turn a beverage with no nutritional value into a remedy, a refreshment, and an...

Published by Thriftbooks.com User , 16 years ago
There appear to be three types of books that are commonly written about the Coca-Cola Company (NYSE symbol: KO): (1) official company histories that have been approved by management; (2) nostalgic books that focus on the company's early history and/or the numerous "antiques" and souvenirs that it has produced over time, and (3) objective histories that dig below the press releases for the real story of this remarkable company. This book falls squarely within the third category. While it provides a quick view of Coke's early years, it focuses upon the reigns of Roberto Goizueta and Douglas Ivestor, who between them managed to get the company into the predicaments it faces today, Goizueta by focusing solely upon upping the stock price and Ivester by creating Coca-Cola Enterprises, the creature that would destroy the company's base of loyal bottlers while allowing manipulation of the financial statements of both companies. (It should be noted that Ivester was responsible for numerous other screw-ups, but CCE was the major one.) Both executives came away with enormous amounts of benefits upon their respective terminations (more than a billion dollars in the case of Goizueta, who died before he could enjoy it). Another review of this book descrtibes it as a "mundane history." I disagree -- it clearly descibes the arrogance, rigidity and incompetence that plague the company to this day. Ms. Hays' description of the financial machinations that went into making both KO and CCE appear more successful than they actually were is especially fine. While she doesn't go into the accounting fine points, she does provide a clear trail for those wishing to do so. Although carrying a copyright date of 2004, the book ends at the end of 2002 with the appointment of Steve Heyer, an outsider, as president. When the time came to replace Doug Daft as chairman and CEO, the board overlooked the highly competent Heyer, choosing instead Neville Isdell, a long-time employee not known for his breadth of vision. Heyer promptly resigned. Some things never change.

Published by Thriftbooks.com User , 17 years ago
I read this book over the past few days in my travels between Fort Wayne and Phoenix and found it to be well-written and exceptionally interesting. The problems faced by the Coca-Cola company are not at all confined to the beverage industry, and I would suggest this book to anyone in a business with distributors and independent agents. In my field of work, orthopedic implants, we face strikingly similar challenges and it's very interesting to see how Coca-Cola's approach has and has not worked. For $18, you won't go wrong...

Published by Thriftbooks.com User , 17 years ago
I thought the book did a great job at giving the reader an idea of the mindset of Coca Cola. I will never look at a Coke the same way ever again. :o) The book wasn't afraid to talk about the good and the bad about Coca Cola as well as it's strong and weak sides. Great reading.

Published by Thriftbooks.com User , 18 years ago
I received this book in an unexpected summer package that arrived courtesy of coke-gps, a business that deals with the coca-cola gps contest. I decided to read it and find out what coke cell phone products and gps receivers were doing to the us market. Coca-Cola Unexpected Summer Sweepsteaks and other marketing campaigns have a stronghold on the market right now and the fact that they now have their hands on GPS receivers and Coke Can Cell phones is somewhat scary. I would recommend this book to anyone interested in the Coke GPS and Coke Cell phones.

A Rigorous Analysis of Real Crises

Published by Thriftbooks.com User , 18 years ago
Many of those who are already familiar with the long and colorful history of the Coca-Cola Company may share my own curiosity about the problems it has struggled with in recent years. What happened? A question of greater interest to me, what caused all the problems after a century of increasingly greater sales and profits? In this volume, Hays provides a brief but sufficient review of the company's history through 1980 before focussing the bulk of her attention on Robert C. Goizueta's 17 years as CEO until his unexpected death in 1997, and then on M. Douglas Ivester who succeeded Goizueta for only two years until being forced out. In certain respects, Hays resembles a cultural anthropologist as she rigorously analyzes the strengths and weaknesses of the two CEOs as they struggled (with mixed success) to sustain the Coca-Cola Company's market dominance, both domestically and internationally. As she presents her material, I was convinced that many of the problems they faced and some of which they inherited are similar to those which Louis V. Gerstner encountered when he became CEO of IBM. Specifically, a highly political corporate culture, well-entrenched resistance to change, estrangement from customers, and contempt for early-warning signs of imminent deterioration of both prestige and profits. To her credit, Hays demonstrates meticulous care and commendable circumspection when explaining that several of the problems which the Coca-Cola Company encountered during the past two decades were by no means unique as its globalization initiatives proceeded, given internal upheavals in emerging markets and currency devaluations over which it had little (if any) control. It was also among the corporate victims of anti-Americanism which, if anything, has become even more virulent during the last 12-18 months. Nonetheless, one of her central themes is that the Coca-Cola Company was as relentlessly committed to a defective "formula" for growth worldwide as it was protective of its super-secret formula for syrup. Meanwhile, the company weakened long-term, mutually beneficial relationships with many of its independent bottlers. Some of the most engrossing material in her book examines a number of executive-suite dramas (and melodramas) which suggest, to me at least, an inability and/or unwillingness among senior managers to affirm in their conduct certain values with which the company had once been so closely identified, notably in areas such as corporate good citizenship and strategic partnerships based on trust.Recent developments suggest that current CEO Douglas N. Daft and his senior management team continue to struggle with many of the aforementioned problems and, through their determined efforts, the Coca-Cola Company is beginning to solve them. Hays observes that "They knew the formula. They had done it before. They would just have to do it again." Hopefully they will succeed, guided and informed by lessons learned during recent years...lessons which ar
Trustpilot
Copyright © 2022 Thriftbooks.com Terms of Use | Privacy Policy | Do Not Sell or Share My Personal Information | Accessibility Statement
ThriftBooks® and the ThriftBooks® logo are registered trademarks of Thrift Books Global, LLC