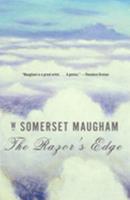 Larry Darrell is a young American in search of the absolute. The progress of this spiritual odyssey involves him with some of Maugham's most brillant characters - his fiancee Isabel, whose choice between love and wealth have lifelong repercussions, and Elliot Templeton, her uncle, a classic expatriate American snob. The most ambitious of Maugham's novels, this is also one in which Maugham himself plays a considerable part as he wanders in and out...

One of Maugham's Best

Published by Lori A. Meyers , 1 year ago
This is such a wonderful well told story about the search for meaning, love, and spiritual awareness in life. A timeless dive into the human condition.

Published by Tracy , 2 years ago
I have now ordered this book and several others from this site. I've also used Amazon marketplace when I've ordered used books online. I always order "very good" or "like new" quality but these books don't live up to either category as they do with other used book sites. This book was supposed to be "very good" but it has coffee or some other stains on the pages and the cover is bent with a permanent crease. That quality is fine for "good" but "very good" should be free of marks of any kind and only minimal signs of wear. Just about every book I've ordered from this site (about 10 in the last few weeks) has been under the use category stated. I won't order any more books from this site.

The opening and closing thoughts of the protagonist, Larry, in the novel

Published by knight_of_the_beach , 3 years ago
The description of Larry on the the first page and on the last page of the novel are what we all strive to be. Everything written between those pages explains how Larry became that person so described. I know that is how I would like to be remembered. I also recommend the 1946 version of this movie with Tyrone Power as Larry. When I was a high school freshman I saw the movie for the first time on TV. I have viewed this movie close to a dozen times. It was, and still is, the most impactful movie affecting me and my life. I also recommend Hilton's novel, as well as the 1937 movie, "Lost Horizons". It has a similar theme about the search for goodness in the world. A third movie with that as a tangential theme is "Casablanca" with Humphrey Bogart.

My favorite novel of all-time

Published by Thriftbooks.com User , 17 years ago
This is my favorite book of all time. I've read it several times and seen both movie versions. In fact, it was the unusual, but excellent 1984 Bill Murray portrayal of Larry which made this book known to me in the first place. Here is the story of several characters, some likable and some not, in the post World War I era. Larry, a happy, go-lucky twenty-something pilot (in the movie he's an ambulance driver) returns from the war distraught and disturbed. Before the war he was engaged to Isabel and was going to return and work in his soon to be father in-law's office as stock-broker with his war volunteer buddy Gray. His friends and connections back home would provide him with a secure and comfortable future and he had it made. But unlike some modern day college graduate who's spent their education earning a pre-fab, slam-dunk business degree so as to quickly land a high-paying job, launching themselves into the American dream of yuppy-land, Larry takes a left turn. To Isabel, his friends and family it seems like a wrong turn. To others he will come to meet, Larry has avoided a certain car wreck. What makes "The Razor's Edge" a classic is that you as a reader get to decide for yourself the wisdom of each character's decisions. Somerset Maugham definitely focuses a lot on wealthy, class-oriented Eliot, who seems to be closest in personality to the author himself; but it's obvious too, that a character like Larry was both scarry and intriguing to him. At times it seems like Maugham is mocking Larry, but in others there is a begrudging respect and admiration for him. This ambiguity creates a unique reading experience, especially for those who've read a biography of Maugham (I recommend Ted Morgan's biography). From Eliot the likable snob, to Larry, Gray, Sophie, and Isabel each character is mostly "rounded" (see E.M. Forster's "Aspects of the Novel" for round & flat characters): they are interesting, realistic, and true to form - all the way to the end. As a writer that's not easy to pull off in convincing fashion. One character not represented in either movie version is Suzanne, an artist who Larry spends some time with in Marseille; while she is drawn more flatly than the other main characters, I enjoyed this obscure aspect of Larry's life in much the same way that great movies are sometimes reincarnted as "director's cuts" with intriguing facets of a film previously edited out; it's like you're seeing a new dimension of something you previously thought complete. In any event, there are also plenty of interesting minor charcters like Kosti (Larry's mining partner in Germany) and his Indian guide (who's name escapes me) who both get Larry to think in new ways about people and life. The transistions from pre-war Chicago and its suburbs, to Paris, Germany, the Indian Himalayas, and back to Paris are fascinating. Through his own accounts with a good friend of Eliot's (Maugham himself is a character in the book) in various Pari

Published by Thriftbooks.com User , 18 years ago
The Razor's Edge is an unusual amalgam -- three-quarters witty social commentary about American and European society, one-quarter Eastern philosophy -- bound together by Maugham's impeccable prose -- almost as though Henry James and Hermann Hesse had collaborated. The book contrasts the adventures of Larry, a seeker who travels widely in search of life's meaning, with that of his former fiancee, Isabelle, who sacrifices her love for Larry in favor of wealth and social standing. While the book is an odd literary chimera, the result is supremely satisfying. One gets to luxuriate in Maugham's biting descriptions of the social milieu in Paris, the Riviera, and London, while simultaneously being exposed to some much bigger issues presented in the context of Larry's intriguing quest for enlightenment. Along the way there is beauty, degradation, betrayal, forgiveness, art, fashion, turgid fascination with France's demimonde, and lots of other juicy material. A great read -- fun yet substantive -- like eating a fluffy eclair that actually has nutritional value!

Published by Thriftbooks.com User , 21 years ago
William Somerset Maugham is considered one of the best authors of the 20th century. After reading this book, I can understand why. His grasp of the human condition is simply phenomenal. He is one of those rare authors that can make his characters leap off the page and become living, breathing creatures. The introduction to this Penguin edition spends much time trying to place the fictional characters into the context of Maugham’s life. I’m sure the characters in this story are somewhat based on real people, as any author worth his salt always draws on real experience to create a story. Personally, I couldn’t care less if these characters were based on real people, as it wouldn’t make them any less interesting to me."The Razor’s Edge" really has a simple message. It asks us to reflect on how we lead our lives. Do we follow the masses or seek inner fulfillment? Is it right or wrong to drop out of society and follow our inner selves? Maugham makes us ponder these questions as he introduces us to his characters ... When I think of the overall plot of the book, even after reading it, it doesn’t really seem that interesting. But when I think all of the little things within the book, I realize how excellent the novel is. Read this book, even if it is the only Maugham book you ever read (which is a pretty pretentious statement on my part, as this is the only one I’ve read). The prose is excellent, and the psychological insights are really amazing. Recommended.

Journey to the Edge

Published by Thriftbooks.com User , 22 years ago
I don't believe any other story has moved me quite the way this one has. Larry Darrell's single-minded quest for meaning is told by one of the true masters of prose, Englishman W. Somerset Maugham. Set mostly in upper-class Europe following the first World War, Larry contrasts sharply with his rich acquaintances who desperately seek meaning in their own lives, but never seem to know exactly what they are looking for. While Maugham makes it clear that Larry has gained unique insight from his endless quest, he also takes pains to detail what Larry has given up - allowing us to wonder about the choices we might have made along the way. He never quite allows us inside of Larry's head, leaving his peaceful state just out of reach, almost as if Maugham is urging us to pursue a quest of our own. Maugham wrote this late in his career, and he patiently tells this story in a way that demonstrates understanding of both the subject and form. Unfortunately, in a culture that values 60-minute television dramas and 120-minute films with clear plot-markers, his style of meaningfully building characters who actually live the story instead of being rushed past the various turning points is not well understood or appreciated today. However, any reader who willingly follows Maugham as he learns about Larry Darrell will be richly rewarded.

This book may change the way you think about your life.

Published by Thriftbooks.com User , 26 years ago
I think I may have made a tactical error the other day when I told my boss that my career goal was to win the lottery. But last week I read The Razor's Edge and ever since I've been wondering what made me think that work was so important. Here's the story: Larry Darrell is a changed man when he returns to Chicago after serving in World War I. During the war he witnesses the death of a good friend and comes to the inescapable conclusion that life is too precious to waste. Armed with this insight, he alarms his friends, family and fiancee when he turns down the plum job and heads to Europe to begin the great adventure of his life. From the coal mines of southern France to a lama's monastery on a mountain top in Tibet, Larry Darrell steadfastly resists the pressure to succumb to the societal norms of money and career and instead pursues the meaning of life with a single-minded intensity and a touch of grace. So how are you going to live your life? Have you had that gnawing feeling lately, as you are working through your 20's and 30's, that you may have unwittingly entered into a Faustian bargain? Have you ever considered trading in the ordinary for the extraordinary? These are questions that we all face and ones that are explored with great insight and skill by W. Somerset Maugham in The Razor's Edge. And with great humor too--not for nothing was it made into a surprisingly good movie starring Bill Murray as Larry Darrell. So forget about the 12-step programs, the books that tell you how to get along with people you'd rather not get along with and send your inner child to bed. Check out The Razor's Edge. Just don't tell your boss what you've been up to. Oh what the heck, tell the boss. It would make Larry Darrell smile and who knows, it might make you happy too
Trustpilot
Copyright © 2022 Thriftbooks.com Terms of Use | Privacy Policy | Do Not Sell My Personal Information | Cookie Preferences | Accessibility Statement
ThriftBooks® and the ThriftBooks® logo are registered trademarks of Thrift Books Global, LLC