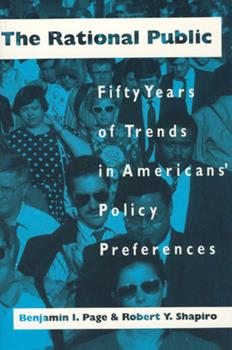 by Benjamin I. Page and Robert Y. Shapiro

This monumental study is a comprehensive critical survey of the policy preferences of the American public, and will be the definitive work on American public opinion for some time to come. Drawing on an enormous body of public opinion data, Benjamin I. Page and Robert Y. Shapiro provide the richest available portrait of the political views of Americans, from the 1930's to 1990. They not only cover all types of domestic and foreign policy issues, but...

Published by Thriftbooks.com User , 12 years ago
Scholars often lament that the public - as individuals - are ignorant regarding politics, and of their own policy preferences. This was supported, in part, by Campbell et al (1964) who illustrate the policy preferences were not strongly correlated with vote choice. This was further supported by Converse (1962) who found that the opinions of individuals fluctuated rather wildly over time. As such, Converse argued "large portions of the electorate do not have meaningful beliefs even on issues that may have formed the basis of intensive controversy among elites for substantial periods of time" (1962). Converse (1970) furthered his argument, claiming the public had "nonattitudes," and simply gave a random response because they felt obligated to do so. Page and Shapiro (1992) contend that the individual voter may be ignorant of political issues in general, that is, individual policy preferences may be "incorrect" from a rational perspective, but the aggregate collective policy preference of a majority of citizens is not only rational, but stable. In part, the authors contend that this occurs through the theory of large numbers and subsequently normally distributed samples. Page and Shapiro (1992) recognize that citizens may not have a deep understanding of specific political issues, but they do possess a more general understanding of major issues. They cite the example that citizens may not know what the acronym SALT stands for but they do recognize that the US and USSR are engaged in arms reduction talks. Citizens understanding of major issues are coupled with the argument that individuals have some fundamental needs and have "uncertain beliefs" regarding how public policies will affect those needs. As such, Page and Shapiro contend that individuals have a long-term, although vague, preference for policies which will best serve their fundamental interests. Because preferences are uncertain in the short-term, they are susceptible to various sources of information and may fluctuate. However, if we "average" an individual's preference over time, we can find their "true" preference. There will be a "central tendency" and responses will fluctuate around this point. As such, if the individual has a "true" preference, then in the aggregate, there will be a collective preference. What is of prime interest here is that with a large collective sample, things like misinformation, mood swings, sampling error, etc. will be balanced out. As such, widespread public opinion can be an accurate description of the real interest of the majority of citizens, even if their own personal policy stances may not be truly representative of their core self-interest. Page and Shapiro also draw into question the idea that public opinion changes rapidly and is unpredictable. They contend that in general, public opinion is quite stable, and when it does change, it changes in predictable ways. The authors contend that when policy opinion changes, it does so in
Trustpilot
Copyright © 2022 Thriftbooks.com Terms of Use | Privacy Policy | Do Not Sell My Personal Information | Accessibility Statement
ThriftBooks® and the ThriftBooks® logo are registered trademarks of Thrift Books Global, LLC