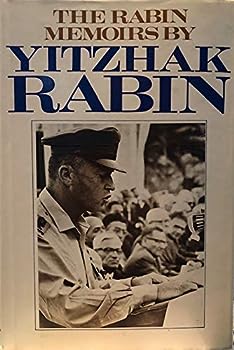 This description may be from another edition of this product. The assassination of Yitzhak Rabin in November of 1995--one year after he shared the Nobel Peace Prize with Yasir Arafat--sent shock waves around the world. Known as both a man of war and of peace,...

Published by Thriftbooks.com User , 13 years ago
Unfortunately the Rabin memoirs suffers the same ills as many other memoirs in that the author uses his pen to whitewash his own history and that of some of his friends. This is, as it always is, a tragic fact, because history would be so much better served had Rabin written a truly honest account. The problem with this book is that the areas were Rabin leaves out details and distorts some facts colors this entire work, so that the reader has to question everything that is in the book. What I don't understand is why Rabin (and other historical figures as well) whitewashes areas of history that are known or will inevitably become known. Like when Rabin calls Ben-Gurion's decision to step down from his governmental positions as inexplicable when the facts of why he did so were known even at that time. He also leaves out the fact that Nasser had offered Israel concessions over the Straits of Tiran before the Six Day War thereby rendering one of his main arguments for Israel's having to got to war null and void. He also says nothing at all of the negotiations between Israel (and its proxies) and Egypt (and some of its proxies) that were going on in secret during his term as prime minister. At the time of his writing these memoirs much of this might have been censored out, but we have no evidence that was the case. The lack of discussion of these and other topics shows himself, his friends and Israel in a much more lenient light while casting a shadow over Israel's enemies. One cannot but think this was the purpose. With that said, I think anyone interested in Israel and the Middle East needs to read this book along with many other self-serving memoirs, biographies and histories. Even with the flaws this book gives the reader an invaluable insight into one of the leading figures of the Israeli state. You get to see the inner workings of the man, and get a chance to see his philosophies in action. It is a glimpse into his mind, and this glimpse offers the reader many insights. Yoram Peri's afterword is essential and a very welcome addition to this book. It provides the book with a greater context, and a fine analysis of the work and the man as well. The addition of the speeches is also a welcome contribution that adds more context, and gives the reader a better understanding of Rabin's later life. All and all Rabin is a fascinating character. He was a self made man during a harsh time in Israeli history. His life is an extraordinary journey tragically cut short. This book goes a long way in helping readers understand this important figure, and for that reason alone this book should be read.

Yitzak Rabin Was A Man Of Peace

Published by Thriftbooks.com User , 17 years ago
Yitzak Rabin was a great leader. This man wanted to lead Israel to a time of peace. This book gives one a great deal of information about this amazing leader, the country he loved so dearly, and the effort he and his family made to improve life in their country. Too bad a madman had to take his life. Rabin's story is amazing from beginning to the tragic end.See ya next review!www.therunninggirl.com

Published by Thriftbooks.com User , 17 years ago
This book is a good history of the life of Yitzak Rabin.Youare provided excellent coverage of the great war of independanceand his role in it as a member of the Hagannah.This book also describes the leadership role as a general in the six day warand it's impact on the Middle East.Rabin's service as PrimeMinister of Israel is also described in this book.You are given detail of the Israeli rescue mission of the prisoners at theairport in Entebbe.You will also cover the time that Rabin was the ambassador to America in Washington.Also covered in this book is the defeat of the Labor Party at the hands of the Likud.Rabin's role as a peacemaker is also given coverage in this book.This is a very good biography of Yitzak Rabin as well as an adequate history of Israel. Read this book,you will enjoy it.
Copyright © 2020 Thriftbooks.com Terms of Use | Privacy Policy | Do Not Sell My Personal Information | Accessibility Statement
ThriftBooks® and the ThriftBooks® logo are registered trademarks of Thrift Books Global, LLC