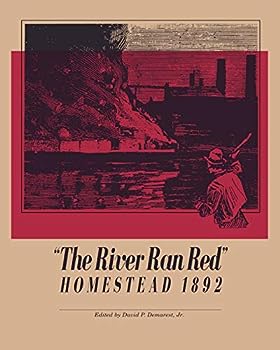 by David Montgomery and Fannia Weingartner

The violence that erupted at Carnegie Steel's giant Homestead mill near Pittsburgh on July 6. 1892, caused a congressional investigation and trials for treason, motivated a nearly successful assassination attempt on Frick, contributed to the defeat of President Benjamin Harrison for a second term, and changed the course of the American labor movement. "The River Ran Red" commemorates the one-hundredth anniversary of the Homestead strike of 1892. Instead...

Disaster on the labor front

Published by Thriftbooks.com User , 16 years ago
This is a concise and well-illustrated account of the deadly strike at the Carnegie Steel works at Homestead, Pennsylvania, in July 1892. When workers' wages were cut despite huge financial gains raked in by the industry because of high tariffs, the Amalgamated Association of Iron & Steel Workers called a strike at the Carnegie mill for July 1. Management decided to treat the strike almost as an outright war on their business, and when Pinkertons were called in to quell the strikers, violence broke out on July 6 in which a number of men were killed. Industrialist Henry Frick was nearly assassinated, and soon troops were brought in to restore order. This book tells the story through contemporary newspaper reports and magazine articles, congressional testimony taken after the event, excerpts from memoirs and other books - all accompanied by many illustrations and photographs. Short essays by modern historians dealing with the technology of steel making, political issues, foreign groups working in the mills, and changes in the laws, among other topics, put the events in perspective. These were dark days on the labor front, and this book captures the mood and immediacy of the strike magnificently. Highly recommended.

Published by Thriftbooks.com User , 23 years ago
The River Ran Red tells the story of the Homestead Strike of 1892 using firsthand sources (for example exerpts from Carnegie's speeches, local and national papers and even memos from H.C. Frick). This book comes alive more than any other book on the strike because it is told by firsthand sources, not a stuffy historian's view.
Trustpilot
Copyright © 2022 Thriftbooks.com Terms of Use | Privacy Policy | Do Not Sell or Share My Personal Information | Accessibility Statement
ThriftBooks® and the ThriftBooks® logo are registered trademarks of Thrift Books Global, LLC