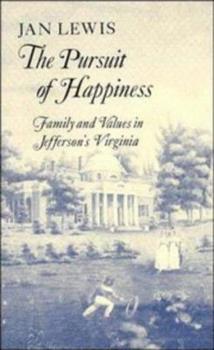 The Pursuit of Happiness: Family and Values in Jefferson's Virginia

This is an unusual and challenging study of the 'inner world' of the Virginia gentry during Jefferson's lifetime. It argues that, in the years after the Revolution, the gentry turned away from public life into the privacy of their homes and families. A new, sentimental religion agreed that the world was filled with woe and advised detachment from it in preparation for a better one to come. Notions of success, likewise, offered little cheer, as men...

Published by Thriftbooks.com User , 23 years ago
Lewis uses diaries and other personal writings to support her argument that the value Virginians placed on family and emotion changed from the late 1700s to the early 1800s. Virginians of the pre-Revolution era equated happiness with independence (freedom from debts or even social obligations to others). Their primary goal was a "peacable life," which was attained when one was independent and had domestic tranquillity. Emotional outbursts could upset domestic tranquillity, so displays of emotion were to be avoided. Parents displayed their affection for their children by financially establishing them in the world (providing them with independence) and children displayed their affection for parents by being obedient and cheerful. Moderation in all things, including emotion, helped to maintain the desired domestic tranquillity. Moderation applied to religion brought the non-emotional, rationalistic Deist religion into favor. Unfortunately, this moderation applied to child-rearing habits produced genial but lazy adults. After the Revolution, Virginia's economy faltered and the genial, but lazy, offspring of the pre-Revolution Virginians could no longer rely on their parents to set them up financially. People who grew up not expecting to work for a living, and who grew up looking down on those who did, found themselves needing to "run after money." Many who were unsuccessful placed part of the blame on their own laziness which they attributed to how they were raised as children. Evangelical religion also became popular at this time. This emotion-filled religion described the world as a dark, cruel wilderness which could only be escaped by dying and going to a peaceful Heaven. This bleak description of the world hit the mark for the Virginians who were having a difficult time in the changing Virginian economy, but the only hope religion offered was death. Virginians began to turn to the family for emotional fulfillment and to the home as an asylum from the cruel w! orld. Family and emotion became preferred over financial success and independence. Now parents displayed their affection for their children by giving them love and an education that would enable them to be self-reliant. Children displayed their affection with love as well. Family and emotion reigned supreme.
Copyright © 2020 Thriftbooks.com Terms of Use | Privacy Policy | Do Not Sell My Personal Information | Accessibility Statement
ThriftBooks® and the ThriftBooks® logo are registered trademarks of Thrift Books Global, LLC