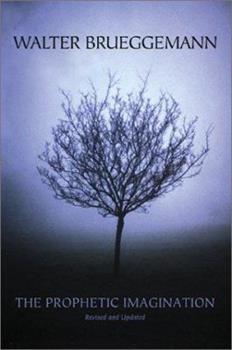 In this challenging and enlightening treatment, Brueggemann traces the lines from the radical vision of Moses to the solidification of royal power in Solomon to the prophetic critique of that power with a new vision of freedom in the prophets. Here he traces the broad sweep from Exodus to Kings to Jeremiah to Jesus. He highlights that the prophetic vision not only embraces the pain of the people but creates an energy and amazement based on the new...

A Book That Brings Perspective

Published by Thriftbooks.com User , 13 years ago
The Prophetic Imagination is a profound and illuminating book, applying observations of the socio-political tensions in the Biblical narrative, and touching on human psychology. The observations, then, facilitate a close comparison of the imperial critique found within scripture and that of present consumerist society; This book effectively extends the imperial critique found in scripture to the present day empire. In doing so, Brueggeman nicely demonstrates the kind of message that needs to be heard today. Brueggeman uses the condition and the message found in the biblical narrative from Moses and the Exodus, Jeremiah, Isaiah, and Jesus to demonstrate what kind of message this can be. This book is insightful and well-written, and I think it may have the affect of reinforcing interest in reading the Old Testament. I would highly recommend this book. The following is a summery of the major points made in the text. It should be mentioned that I pulled these references from the 1978 version. In The Prophetic Imagination, Walter Brueggemann's review of the Old Testament narrative leads him to recognize general characteristics of the imperial consciousness, and in the prophet's task to "evoke a consciousness and perception alternative to the consciousness and perception of the dominant culture around us."(13) The world of empire, according to Brueggemann, is sustained by three interconnected elements: The Economy of Affluence, Politics of Oppression, and the Religion of Imminence (that is, domestication of God). Hence, the empire ignores God's freedom (that God cannot be domesticated) and his justice (his advocacy of the oppressed). The royal consciousness, then, leads people to apathy about suffering and death, and despair about power to new life. The task of the prophet is to subvert this royal consciousness. First, consider apathy. The royal consciousness is upheld by an overall acceptance of immediate satiation. Therefore Brueggemann argues that the "royal consciousness leads people to numbness, especially to numbness about death. It is the task of the prophetic ministry and the imagination to bring people to engage their experiences of suffering to death."(46) The culture of immediate satiation is necessary to avoid the existential pain and struggle. The royal consciousness is concerned with an eternal now - it therefore denies the many dimensions of existence, exchanging concerns about experience with concerns about behavior (conformity over confrontation). "In the Christian tradition," writes Brueggemann, "having been co-opted by the king, we are tempted to legitamate the denial by offering cross-less good news and a future well-being without a present anguish. Such a religion serves the king well, for he imagines he is still king. He imagines that he can manage and that his little sand castle will endure (if you pardon the phrase) forever." That is, the life upheld by the empire is an illusion, advocating lies abou

The Tasks and Traumas of God's Greatest Prophets

Published by Thriftbooks.com User , 15 years ago
Here is an extraordinarily valuable little book (104 pp. of text) for Christians who would like to better understand the essence of the prophetic impulse and the nature of the subsequent ministry that may be derived from it. Those with Pentecostal or Charismatic backgrounds or experiences will discover a profound spiritual resonance and a clear biblical insight in THE PROPHETIC IMAGINATION by Walter Brueggemann (Philadelphia: Fortress Press, 1978/1983). Brueggemann shows convincingly from the ministries of Moses, Jeremiah, and Jesus, how each man in response to either an oppressive empire (Egypt) or unjust, religious community (pre-exilic Judah and first century Israel) employs "radical criticism" to "dismantle" the dying or dead culture. Solomon's imperial rule is also examined as an example of how a "royal consciousness" may serve to subvert even the community of promise resulting in satiation and the inevitable numbness and death. Second Isaiah (Isa. 40-66) serves as the primary example of the second aspect of the prophetic task; namely, "energizing" the despairing community with hope. Brueggemann presents his thesis concerning the would-be Christian prophets' need for personal anguish, grief, and mourning as contrasted with the less painful exercise of mere anger and apathy while he ministers as God's instrument. For me it was surprising and gratifying to discover that an Old Testament professor from a mainline Protestant tradition could supply such compelling insights concerning both the tasks and the traumas of God's prophets. Not even my Pentecostal seminary professors helped me in this regard as much as this short read. In the final chapter, it is clear the Brueggemann has the contemporary Christian community in mind as those again in need of the prophets' ministry today, but such discussion is not elaborated. Although he puts his finger on the many "bourgeois . . . obdurate" congregations of Christendom today--endicting them as closed and unsupportive to prophetic ministry--the courage to rebuke and expand upon their disinterest is not forthcoming here. The examination remains theoretical with the author's admission of "my own unsureness about this perception" (p. 111). The door remains ajar for others, however, as we read: "grief and praise are ways of prophetic criticism and energy, which can be more intentional even in our age" (p.111). In the twenty-eight years since the book's publication, it is worth noting that prophetic intimations have become increasingly evident in numerous North American settings, although usually outside established church organizations. (The phenomena of the burgeoning "para-church" ministries during the last couple decades being supporting evidence.) As I Corinthians 12 and Ephesians 4 indicate: the opportunity for prophetic ministry has been the intent of the Holy Spirit all along! The office of prophet still remains a high and painful calling with comparatively few willing to suffer its dark side for

Published by Thriftbooks.com User , 16 years ago
Walter Brueggemann is the most dynamic writer of Old Testament Theology in the World. Here he deals with the Prophetic imaging of an alternative community which God's people are called to be. In the OT Israel is always called to not succumb to the idolatry of the royal powers and center its life around Yahweh as an alternative people who practice real justice, mercy, and love. Brueggemann offers great insight into the texts of the Old Testament. You will always say "wow, why did I not see this before" when reading a Brueggemann book. I recommend this book to everyone who is interested in the Bible.

A Must-Read for Jews and Christians Alike

Published by Thriftbooks.com User , 21 years ago
This book is a profound indictment of many churches and synagogues today who fail to recognize the "counter-cultural" prophetic voice of the Biblical faith. Exploring the lives and teachings of Moses, Amos, Isaiah, and Jesus, Brueggemann rightly contends that our religious roots call us to be passionately critical of the cultural status quo and to embrace an energetic, optimistic vision of the future. A very readable, relevant critique which will challenge the views of liberals and conservatives alike.

Outstanding! A must-read for concerned people.

Published by Thriftbooks.com User , 22 years ago
This book is counter-cultural in the best sense. It looks at Jeremiah, Isaiah and Ecclesiastes to demonstrate the need for different attitudes and expressions to begin the turn from sameness and despair toward change and hope. It remains one of the most important books in my life and often in the lives of people I have recommended it to. It is filled with astute observations in a clear, deliberate writing style, and it is not preachy. Phil Hey (hey@briar-cliff.edu)
Copyright © 2022 Thriftbooks.com Terms of Use | Privacy Policy | Do Not Sell My Personal Information | Accessibility Statement
ThriftBooks® and the ThriftBooks® logo are registered trademarks of Thrift Books Global, LLC