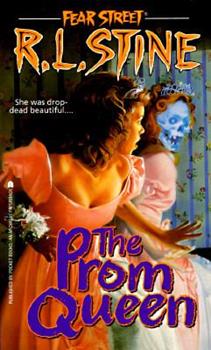 Lizzie McVay realizes that someone is murdering the five Prom Queen candidates one by one--and that she may be next on the list Can she stop the murderer before the dance is over--for good? Stine's Fear Street books are every bit as popular as Pike's.--School Library Journal.

Dying to be the prom queen...

Published by Horror crazy , 4 months ago
Lizzie McVay is one of the five girls who are excited to be prom queen candidates for the upcoming Shadyside High prom. But excitement turns to terror when someone begins killing the prom queen candidates one by one! Who is it who either kill to be the next prom queen, or simply kill the other girls’ chances?? Lizzie had better figure it out... or she won’t live to see prom night! This wasn’t the best Fear Street book I’ve ever read, but it was enjoyable, suspenseful, and creepy! At the end of the story, the revelation of the killer’s identity and motive was somewhat surprising. Great job in your efforts to make prom night seem terrifying, R.L. Stine!

this book is sooooo good!

Published by Thriftbooks.com User , 18 years ago
I am fifteen. And I just happened to pick this book up when I saw the front cover and read the title. It was really good. The horror and action was magnificent. Sometimes, people who read Stine books for a long time think that they know who the killer is going to be........... this time you wont. you will aboslutely NEVER EVER guess who the killer is unless you finish reading the book. And when you do find out who it is, you will just die in shock and amazement. It is sooooo good and it's definitely a page turner. READ READ READ THIS BOOK!

Published by Thriftbooks.com User , 19 years ago
Have you ever wanted to pick up a book that is filled with screams and thrills? The Prom Queen is one book you'll never forget. From the Fear Street series, The Prom Queen is a thriller you won't want to put down. Lizzie McVay and her friends: Simone, Rachel, Dawn, and Elana have all been nominated to be Shaydyside Highschool's Prom Queen for the Spring Dance. The Prom Queen is awarded a $3,000.00 scholorship to a nearby college. There is only one problem- someone wants all the money, someone who is greedy enough to kill. Simone disappears and Lizzie is devestated when her best friend Rachel is murdered. Now she is afraid the murderer will come after her too. Can she stop him before it's too late? I really like The Prom Queen because the suspense and thrills will get you on the edge of your seat. There was only one part I didn't like- when Lizzie had a nightmare. I think that R.L. Stine wrote a little too much detail. But doesn't he always? Just remember, keep the light on!

Published by Thriftbooks.com User , 23 years ago
I've been reading fear street since I was eightand now I'm 10.I think Prom queen is the best! I wasn't sure who the murdurer was Justine,dawn,elaine.I liked this book!

Published by Thriftbooks.com User , 23 years ago
This book is really scary. You never suspect who the killer is. It starts when a girl is found in the Fear Street woods. . . dead. Then on eof the prom queen candidates dissappears. Then, another queen candidate is murdered. Then another. And another. Who is killing the prom queens? Read the book to find out.

Lizzy McVay is afraid that someone is killing prom queens.

Published by Thriftbooks.com User , 23 years ago
This book was awesome! It was edge-of-your-seat thrilling! The characters were so real and believable, it felt as if you were part of the book.
Copyright © 2020 Thriftbooks.com Terms of Use | Privacy Policy | Do Not Sell My Personal Information | Accessibility Statement
ThriftBooks® and the ThriftBooks® logo are registered trademarks of Thrift Books Global, LLC