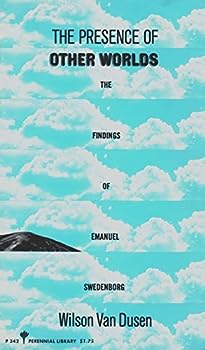 The Presence of Other Worlds

In 1974, Wilson Van Dusen published a groundbreaking study on the findings of Emanuel Swedenborg, a book that has inspired thousands to look more closely into Swedenborg's works and to consider the... This description may be from another edition of this product.

A psychologist looks at Emanuel Swedenborg.

Published by Thriftbooks.com User , 23 years ago
Several years ago, I was involved transiently with an English woman who's mother was schizophrenic. Odd as this woman was, or perhaps *because* she was so odd, I was intrigued by her view of the world, and of reality. We had many endless discussions, our views being divergent, yet somehow complimentary. One day, she came home with a book she'd taken from the university library. "Read this," she said, offering no further explanation. It was THE PRESENCE OF OTHER WORLDS by Wilson van Dusen. I, of course, read it. Is it too much to say things have never been the same since? I'd never before heard of Emanuel Swedenborg, and I found this psychological exploration of his findings more than intriguing. As a psychiatrist, I was particularly intrigued by Chapter 6, "The Presence of Spirits in Madness." Van Dusen here describes in own work as a clinical psychologist in a California State Hospital in the 1960's. I have to admit, the idea of interviewing *the voices* of my schizophrenic patients had never before occured to me. This is, by far, one of the most fascinating bits of writing I have ever come across. And, though hardly mentioned in this book, I then found my way to the works of Carl Jung (who was mysteriously omitted from my psychiatry residency training), another reader of Swedenborg. My encounters with psychiatric patients, and with my own inner world, were thus redirected permanently. I *highly* recommend this book to anyone with similar interests.Jon Jackson, M.D.
Trustpilot
Copyright © 2022 Thriftbooks.com Terms of Use | Privacy Policy | Do Not Sell My Personal Information | Cookie Preferences | Accessibility Statement
ThriftBooks® and the ThriftBooks® logo are registered trademarks of Thrift Books Global, LLC