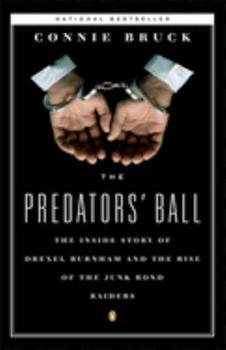 The Predators' Ball: The Inside Story of Drexel Burnham and the Rise of the Junkbond Raiders

During the 1980s, Michael Milken at Drexel Burnham Lambert was the Billionaire Junk Bond King. He invented such things as "the highly confident letter" (I'm highly confident that I can raise the money you need to buy company X) and "the blind pool" (Here's a billion dollars: let us help you buy a company), and he financed the biggest corporate raiders--men like Carl Icahn and Ronald Perelman. And then, on September 7, 1988, things changed. The Securities...

The Junk Bond King When Much of Corporate America Was His Fiefdom.

Published by Thriftbooks.com User , 16 years ago
"Predator's Ball" follows the rise of the junk bond market, from Michael Milken's ambitions in the 1970s through Drexel Burnham's dominance of the market under Milken's leadership in the 1980s, including Drexel's controversial financing of high-profile hostile takeovers, to the beginning of legal trouble for Drexel in 1986. Author Connie Bruck interviewed hundreds of people over a 2 ½-year period, including Drexel employees and Drexel clients, to learn what went on inside "the Department", Drexel's mythic Beverly Hills junk bond offices. Bruck becomes increasingly critical of Michael Milken's tactics as the book progresses, but it is worth noting that she did not set out to write an exposé. Bruck approached the project with sympathies "more toward Milken and his band of renegades than toward the corporate establishment they were attacking", but years of peering inside the Department changed her mind. Regardless of where your sympathies lie, there is a lot of admirable research and fascinating detail in "The Predator's Ball". The story of the junk bond market is the story of Michael Milken's single-minded rise to power. Milken WAS the market, as they say. Accordingly, most of "The Predator's Ball" is dedicated to Milken's ambition to fund a new generation of businesses with high-yield low-rated bonds ("junk bonds"), his creation of a department at Drexel that embodied his unique views of productivity and capitalism, and the ways and means to Drexel's utter domination of the junk bond market in the 1980s. Milken's larger than life presence is nearly absent, however, from the book's three longest chapters, which detail successful hostile raids financed by Drexel: Nelson Peltz and Peter May's buyout of National Can, Carl Icahn takes TWA, and Ron Perelman's acquisition of Revlon. These chapters are something of a digression in the Milken story, as he was not front and center in the drama, but they provide blow-by-blow accounts of exactly how these leveraged buyouts worked and insight into the realities of LBOs. Michael Milken created a market for junk bonds where there was almost none, sought 100% market share for Drexel, and used that market to change the face of corporate America. He did it by astutely and commendably flouting convention, but did he flout ethics and law as well? Judge for yourself.

A groundbreaking book in its day. One that is still great

Published by Thriftbooks.com User , 19 years ago
This book was the first real insight into the world of junk bonds, Drexel Burham Lambert and what an important role they played in the business world. Written at a time when Drexel was at its peak, it was a groundbreaking, highly acclaimed book.Connie Bruck ranks along with Joe Nocera as one of the world's best business writers. This book is tremendously readable and gives a balanced but insightful look at Michael Milken.I came away from the book with the idea that Milken was a genius who earned his great fortune with 18 hour work days. and I still believe he had a tremendous and positive contribution to the world.the Some of my friends came away from the book with the idea that Milken was a horrible human being who was ruining the country. The beauty of the book is that it you can read it and draw your own conclusions rather than a writer's preconceived ideas. Buy it and read it again. It is worth always owning.Don McNay...

Great accounting of the infamous "King of the Universe"

Published by Thriftbooks.com User , 20 years ago
One of three must read books on the Michael Milken, Drexel Burnham Lambert 1970's & 80's era on Wall Street. Wonderful storytelling and accounting of the many deals financed with junk bonds by Milken & gang. The other two books, well written as well on Milken, are "Den of Thieves" by Pulitzer Prize winning WSJ writer James B. Stewart, written after Bruck's Ball, and "A License to Steal: The Untold Story of Micheal Milken and the Conspiracy to Bilk the Nation" by Benjamin J. Stein, written last of the three. Stay away from the fantasy work of Jesse Kornbluth's "Highly Confident -- The Crime and Punishment of Michael Milken". It's an authorized version of Milken's life, bought & paid for by Milken himself, who underwrote hatchet jobs on Bruck & Stein to discredit their stellar work. The Predators' Ball does a great job of getting inside the various deals Milken pulled off and how they happened, along with a good history of Michael Milken. Amazing stuff, considering the multi-billion dollar nature of those deals... financed with nothing but junk. The sad thing is, is that if Milken had been caught in this current era of NO public tolerance for Wall Street misdeeds in 2002, he would be serving a hell of a lot more time then the mere 24 months he actually ended up doing on his ten year sentence. 98 counts, he cut a deal to plead guilty to six of them. He walked out of jail after a brief time of reflection, with his Billion$ still stached away in his foriegn bank accounts at his disposal. Crime did pay and pay well for Michael Milken. Stein's License to Steal book estimated that Milken generated some $24 Billion in commissions & fees, from obscene margins & unearthly volume. King of the Universe indeed... and walked away with a mere $1 Billion slap on the wrist fine and a few nights in jail. These three books are better than fiction or novels. History, in Wall Street storybook fashion. The more things change, the more things stay the same.

Published by Thriftbooks.com User , 22 years ago
For those interested in the Wall Street culture of the '80s, where Michael Milken was "King of the Universe", this is a must read. It's a page turner. Superb read. It details the deals and operations of how Michael Milken became the Junk-Bond King... and so called "King of the Universe". Milken was able to raise almost unlimited amounts of capital by cleverly convincing practically everyone on Wall Street that junk bonds offered one of the best returns on Wall Street while at the same time supposedly having historicly very low default rates, which turned out to be the grand lie. He used this capital to fund the corporate take-over mania of the '80s, which dozens, maybe hundreds of S & L's participated in, and ultimately led to the bankruptcy of the S & L industry, and U.S. S & L bail-out mess.Other required reads: "Den of Thieves": Once upon a time in the '80s, four men nearly destroyed Wall Street. How they made billions and how they got caught. by James B. Stewart. Superb, outstanding nonfiction book by an outstanding journalist, written in storybook fashion, which makes for a can't put down, page turner about Michael Milken: head of high yield securities, Ivan F. Boesky: arbitrageur - investor, Martin Siegel, investment banker with Kidder Peabody, Dennis B. Levine, investment banker. Must read.Another must read: "A License to Steal: The untold story of Michael Milken and the Conspiracy to Bilk the Nation, by Benjamin J. Stein. Another outstanding book on the operations of Milken.I've read these three outstanding books. Any other outstanding books on Michael Milken???

Published by Thriftbooks.com User , 23 years ago
If you love Milken and Boesky and inspired to be one,this book is for you. In this book God had give us the answer why you and and me cannot be billioinaires.Look at page 10."Breakfast was served at 6 A.M., a concession to popular tastes by Milken, who was at his desk each day by 4.30 A.M."
Trustpilot
Copyright © 2022 Thriftbooks.com Terms of Use | Privacy Policy | Do Not Sell or Share My Personal Information | Accessibility Statement
ThriftBooks® and the ThriftBooks® logo are registered trademarks of Thrift Books Global, LLC