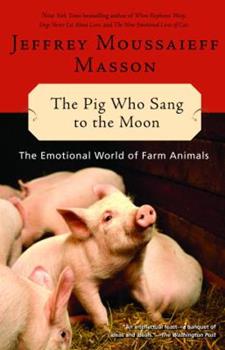 The Pig Who Sang to the Moon: The Emotional World of Farm Animals

Jeffrey Moussaieff Masson's groundbreaking bestseller, When Elephants Weep , was the first book since Darwin's time to explore emotions in the animal kingdom, particularly from animals in the wild. Now, he focuses exclusively on the contained world of the farm animal, revealing startling, irrefutable evidence that barnyard creatures have feelings too, even consciousness. Weaving history, literature, anecdotes, scientific studies, and Masson's own...

Published by Thriftbooks.com User , 18 years ago
I have been a vegetarian for 11 years, unwilling to eat anything that required "killing" an animal. After reading "The Pig Who Sang to the Moon", I cannot with a good conscience continue to eat the foods produced by animals/birds. The suffering they endure for my benefit cannot be justified. I am now beginning my path toward veganism and the small, but necessary, contribution I can make to alleviate the suffering of animals for the selfishness of man.

Published by Thriftbooks.com User , 18 years ago
Bravo Jeffrey Masson! Masson takes on the courageous task of asking us all to consider how we treat our farm animals. He asks us to think. Something that most of us resist doing, particularly when thinking might make us see ourselves (or animals) in a different light. Masson treads along the well-worn path of our human arrogance and provides us with compelling evidence that we are not the only beings in this world that possess rich emotional lives. He opens our minds and our hearts to the thoughtless exploitation and the tragic suffering of the animals that we farm. Masson's compassionate journey into the emotional lives of farm animals will forever change the way we think, feel and behave towards all the animals that we share our world with.Masson is a master writer. He weaves a wonderful tapestry of obscure and fascinating facts, compelling tales, little known historical details, expert opinions and personal musings. His writing never fails enlighten us or to touch us to the very depths of our souls. This book is a tremendously important work and should serve to shake up our narrow view of the farm animals we exploit.

Masson's Most Important Book Yet

Published by Thriftbooks.com User , 18 years ago
Jeffrey Masson has done it again: He's marshaled his fine intellect and compassionate heart to write another fascinating book about animal emotions. This one, about farm animals, could make carnivore readers squirm because they might not want to consider the feelings of the cows or pigs they eat. Nevertheless, I would encourage everyone to read what Masson has to say. As with all his books, The Pig Who Sang to the Moon is filled with interesting facts and observations, and Masson's musings are always extremely entertaining.I especially enjoyed the chapter on ducks because dozens of them come to my lawn every day. Before reading the book, I'd not known that ducks form close friendships and loyally watch after each other. (One duck that Masson mentioned was a seeing-eye duck for a blind friend.) Sadly, I also learned from the book that gangs of male thug ducks sometimes rape females. Masson does not make farm animals out as paragons of virtue, but no one can question his sympathy toward them. And I certainly share that sympathy. The book is a must read for anyone who loves animals. But, actually, my hope is that the book gets into the hands of people who do not love animals because Masson has a superb ability to enlighten and persuade. Perhaps the book will sensitize people to some of the unspeakably heartless ways that farm animals are treated. With understanding, change can come, and Masson surely wrote the book with that goal in mind. He has done more to promote animal welfare than any writer I know.

I will never look at a "farm" animal the same way again!

Published by Thriftbooks.com User , 18 years ago
When I first saw the title of Jeffrey Moussaieff Masson's new book I thought it was the unique story of a talented little pig. I was mistaken. The book, however, is certainly unique! As I turned the pages the "emotional world of farm animals" indeed opened up to me in a different light. I have always believed that animals share the same emotions as we do. Some say that animals do not feel pain in the same way that we do. If this is true, then why do they scream when being injured or killed?I became a vegan nearly 3 years ago. I could no longer live with my conscious that I was directly responsible for the suffering and murder of innocent animals. I have never regretted nor looked back. Non-vegetarians argue that they would not eat their dog or cat, nor would they want a pig or a chicken as a pet. This statement in my opinion is guilt (putting out of their minds that they are responsible for the killing and suffering of an animal), and ignorance (simply believing what most humans believe, in that animals were put on earth for us to exploit at all costs.) Masson's book gave me more food for thought still and solidified my belief's that cows, pigs, sheep, chickens, ducks, etc are all unique in their own right, as are humans. He proves time and time again that these animals possess higher intelligence then we give them credit for and many even enjoy the company of humans, the very species that they should fear and distrust most. I simply will not look at another "farm" animal the same way again!Earlier this week as I sat in the doctor's office, I was reading my copy of The Pig Who Sang to the Moon. A woman sitting across from me took out a piece of paper and a pen. I looked up and noticed her looking at my book and writing something on the paper. She looked up and smiled and said, "oh don't mind me, I am just writing down the name of your book, it looks so interesting.""Yes, it is a fascinating book, it just came out and I cannot put it down," I replied."Well I am interested because I am a farmer and we have a lot of animals on our farm: cows, pigs, chickens, etc, and I think it would be interesting to read. Are you a farmer?" she asked."No I am not a farmer, but if you are, then I highly recommend that you read this book." I smiled somewhat triumphantly.

Published by Thriftbooks.com User , 18 years ago
Scholar and prolific author Jeffrey Moussaieff Masson burst on the scene as one of the foremost contemporary writers about animals with the publication of "When Elephants Weep: The Emotional Lives of Animals" in 1995. "Elephants" was groundbreaking, showing that non-humans of all shapes and sizes lead complex emotional lives. The book became a New York Times bestseller. Masson has since published three books about cats or dogs. All were fine works and fun reads, yet, as each focused solely on one species, none captured Masson's affinity to bring the reader onto the printed page as did his first animal book. While his dog and cat books touched your heart, "Elephants" seeped into your soul. With the publication of "The Pig Who Sang to the Moon: The Emotional Lives of Farm Animals," Masson makes a grand return to his previous lofty accomplishment. Like "Elephants," "Pig" focuses on beings in addition to the chosen one who gets a mention in the title. Sharing with the reader the emotional complexities of many animals is one of Masson's greatest strengths; certainly no writer today is his superior. When he writes, "Farm animals-perhaps because of the fate that invariably awaits them-seem able to feel something I cannot," it makes you wonder if he's being too modest, while questioning whether you, the reader, can feel what he, the author, does. In "Pig," Masson covers all of the modern-day farmed animals, devoting chapters to pigs, chickens, sheep and goats, cows, and ducks and geese. His research is superb; whether you are a long-time ethical vegan or a committed carnivore you will discover something you did not know about each of these beings. Are you aware that a pig is easier to house train than a dog? Or that chickens always know exactly what time it is? That goats are funny, inventive, and love unconditionally? Masson uncovers these and many more gems, including the elderly New Zealand couple whose two ponds fill up with wild ducks "every year, the night before duck season starts." Masson also expertly discusses his supposition of farmed animal emotions, foreshadowing the naysayers certain to question his premise. He writes that "not so very long ago, ... people intimately connected to the lives of animals did not care whether animals had feelings or not." He then quotes Frans de Wall, Ph.D., Professor of Primate Behavior from the Yerkes Primate Research Center, who wrote in a 1999 New York Times editorial, "I still remember some surrealistic debates among scientists in the 1970s that dismisses animal suffering as a bleeding-heart issue. Amid stern warnings against anthropomorphism, the then-prevailing view was that animals were robots, devoid of feeling, thoughts, or emotions." Masson concludes: "in the absence of communal signs, such as physical gestures or sounds, humans are simply not equipped to understand animal emotions. This does not mean they are not there." "Pig" is a book that pulls no punches, yet is "mainstream" enough to reach a wid
Trustpilot
Copyright © 2022 Thriftbooks.com Terms of Use | Privacy Policy | Do Not Sell My Personal Information | Accessibility Statement
ThriftBooks® and the ThriftBooks® logo are registered trademarks of Thrift Books Global, LLC