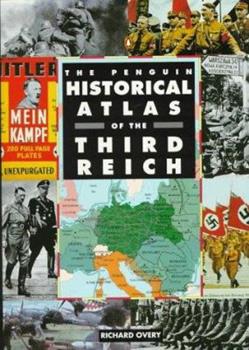 The Penguin Historical Atlas of the Third Reich

Formally inaugurated in Potsdam in 1933, the Third Reich was regarded by Hitler as the greatest in a line of mighty German empires. His mystical belief that this empire would last a 1000 years proved unfounded, but not before a world war which resulted in the loss of at least 60 million lives.

Published by Thriftbooks.com User , 14 years ago
Richard Overy's "The Penguin Historical Atlas of the Third Reich" is a superb reference work. In just over 100 pages (not counting timelines and appendices) it provides an excellent overview of the Third Reich, working in roughly chronological order from the turmoil at the end of the First World War to the chaos and despair at the end of the Second World War. The book is sectioned into seven parts: Each part contains a four-page introductory section followed by three to ten chapters further illuminating that topic. The seven parts are: I. From War to Third Reich, 1918-1933 II. Establishing the Dictatorship III. Foreign Policy in Germany, 1933-1939 IV. Expansion and War, 1939-1945 V. The German New Order VI. German Society and Total War VII. The Aftermath Each chapter that follows an introductory section is only two pages, yet there is an incredible amount of information packed into those two pages as easily understandable pie-charts, graphs, and/or maps are included. Many interesting photos and posters (or other propaganda) relevant to a chapter are also often included, although they are generally quite small. The writing in each chapter and section is extremely well-done. Time and again the author deftly explains complicated matters in a few brief paragraphs. The book is a handy reference on many of the social, economic, political, and military aspects of the Hitler regime. It could almost double as a mini-history of the Third Reich and certainly supplements any study of it. Highly recommended.

Published by Thriftbooks.com User , 14 years ago
Comprehensive in its scope, dense in its content. Plenty of charts, maps, etc. More than enough information to get a global picture of what was going on with Germany from the end of the First World War to the end of the Second and its aftermath. It has about 115 pages plus another 15 of timelines. The tone, however, is a bit dry, like a textbook. But I guess, being so concise, it would be difficult to make it more reader-friendly. A very good historical atlas.

Published by Thriftbooks.com User , 19 years ago
If you are looking for a book that gives a tremendous amount of information, of the sort not often found in the books that primarily cover only the actual fighting, or the personality of Hitler and his henchmen, this may be the book you're looking for. Most of the chapters run from 2 to 4 pages, often detailing subjects like Culture and Education, Farming in the Third Reich, Planning the Post-War Order, Exploitation and Plunder, and The Survival of Neo-Nazism. And do you like charts and graphs? Well, this book won't leave you disappointed.All in all, well done.

Published by Thriftbooks.com User , 19 years ago
I bought this book because I wanted to know about the actual mechanics of the Nazi government before and during WWII. This book contains a wealth of information in a very effective format. Each section is 2-4 pages with several maps and graphs, all clearly captioned, accompanied by a page or two of concise text. The book illustrates the state of Germany in the 20's and 30's, Hitler's rise, the path he took into the war, the Nazi plans for post-war Europe, and the overall cost of it all to Germany. Social, industrial, political, and military matters are all covered, in great detail (i.e. number of ships made per yer, broken down by type, number of women in the Nazi party '33 to '45, etc.). The text conveys the underlying situations behind issues of the day, such as Hitler's quest to "unite Germanic peoples" and the underpinnings of the Allies' pacifism in the face of it. I rocommend this book for anyone interested in that era of world history, novice or expert.

Published by Thriftbooks.com User , 21 years ago
Just like the previous reader, this is THE book to read for maps and hard to get information. Pictures, tables, charts, maps...its all there for you to learn and understand the inside of the Third Reich.
Copyright © 2020 Thriftbooks.com Terms of Use | Privacy Policy | Do Not Sell My Personal Information | Accessibility Statement
ThriftBooks® and the ThriftBooks® logo are registered trademarks of Thrift Books Global, LLC