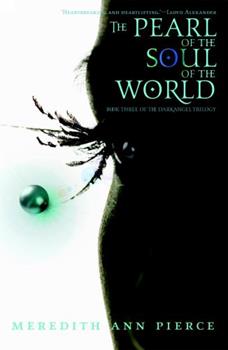 The Pearl of the Soul of the World

(Book #3 in the Darkangel Trilogy Series)

Armed with a magical pearl imbued with all the sorcery and wisdom of the world bestowed upon her by the Ancient known as Ravenna, Aeriel finally comes face-to-face with the White Witch and her vampire sons. Backed by her husband, his army of good, and a throng of magical steeds, she must unlock the power of the pearl to awaken her true destiny and save the world.

"Ravenna's Own Daughter Shall Kindle the Crown..."

Published by Thriftbooks.com User , 15 years ago
***This review contains spoilers*** As the last installment of the "Darkangel" trilogy, "The Pearl of the Soul of the World" had a lot to live up to, as well as a lot to wrap up. In the first book "The Darkangel," slave-girl Aerial saved the darkangel Irrylath from the misery of his own existence under the power of the White Witch and returned him to his mother's house. In "A Gathering of Gargoyles" she undertook another task, in searching for the lost lons to fight against the White Witch in the coming battle and in doing so discovered her own extraordinary heritage. Now the various countries of Aerial's world have gathered together in a great army to march against the witch, with her husband Irrylath at its head. But the story begins in the most unexpected way. As the story opens, we find a young woman in a cave deep underground, with no memory of who she is, mute, with a silver pin driven through her temple and a sinister feeling that someone is following her. Although the "amnesia" plot device may seem cliched to some, Pierce uses it brilliantly by instigating it right from the beginning, so that the girl's identity and the events that led up to her awakening in the cave are kept shrouded until the time is right (and as it turns out, her forgetfulness plays an important role in the narrative; it's not just a silly plot twist and it's *not* brought on by a bump on the head). Found by three duaroughs (beardless dwarfs basically), the young girl accompanies them through tunnels and caverns, all the time endangered by the presence of the witch's evil creatures. Eventually the girl finds a hidden passage to the ancient city of Crystalglass where the last of the Ancients - Ravenna - awaits reveal to her the truth of the White Witch and the world's history and to give her a final task: deliver a (literal!) pearl of wisdom into the Witch's own hand. The girl (as you've probably guessed) is indeed Aerial, and when she meets Ravenna her memories return to her. We learn what happened in the space between "A Gathering of Gargoyles" and the time she found herself in the underground caves, (including the gathering of Irrylath's army, the rebirth of Avarclon, the equine lon that died in the first book, and Aerial's newfound reputation as a powerful sorceress). Most importantly of all is the dynamics between herself, her devoted servant Erin, her detached husband Irrylath and his cousin Sabr. Pierce excellently and poignantly weaves the bonds that tie these people together; Aerial's hopeless love for Irrylath, his seeming indifference toward her, Erin's devotion to Aerial and her scorn for Irrylath, and Sabr's sneaky innuendoes to discredit Aerial and snatch Irrylath for herself. It's certainly a tangled web of intrigue! As well as these core characters Pierce also keeps good track of the rest of her (by this stage, rather large) cast of characters, all of whom have an interesting and vital part to play in the progression of the story. As such, we have

I don't care that it's a trilogy

Published by Thriftbooks.com User , 21 years ago
I loved this book and all the other books in this trilogy. I first read this book and the other two in the trilogy when I was in seventh-grade and I adored it. Now over five years later, I reread it and I still love it. My problem with the book is that the ending left me unsatisfied. It was a very powerful ending but like all the other people out there I was hoping for a happy ending. I was upset when there was not one, but I think that a sequel for this book could be easily written furthering Aerial's adventures. She has a lot of work ahead of her and I wouldn't mind reading more of what happens to her. I believe that after all she went through she deserves to be happy. Ms. Pierce I really hope that you write a sequel to this trilogy.

Published by Thriftbooks.com User , 21 years ago
Well, here's to those of you who absolutely HATED the ending... I liked it. Yes, it was terribly sad, but THAT, everyone, was the element of realism that Ms. Pierce decided to insert into it. I really don't like those little fairy tales where everything is all sappy, happy, and hunky dory in the end. Real life isn't like that. It can really be tragic at times, such as is the case here. And, I definitely agree with whomever it was who said that Aeriel was showing her lack of selfishness in the end. I think every single one of us could learn a lesson from Aeriel. Life isn't about getting what you want. In fact, consider yourselves lucky when you DO get what you want. Aeriel proved her self when she gave up "self" for the good of all, and I absolutely loved the theme of "sacrifice for the greater good"--a wonderful phrase to live by.

The Ending That Did the Series No Justice

Published by Thriftbooks.com User , 22 years ago
The series, as a whole, was one of the most mesmerizing pieces of literature for young adults today. It involved themes such as good vs. evil and the power of love. Once the Darkangel Trilogy is started, you can think of nothing else until it has been finished. You read and read, the suspense driving you further, until you reach the pinnacle...only to find it is the most depressing end to the most enchanting series. The despondence doesn't end there though. You will dwell on the ending, searching for every possible loophole to change it only to realize that a "trilogy" leaves no real space for an epilogue. All in all, any book that can provoke emotions as intense as one feels after reading "The Pearl of the Soul of the World" is well worth reading.

Published by Thriftbooks.com User , 22 years ago
I was very disturbed when I read the other on-line reviews. I think that this book is the culmination of the other two in the trilogy. If the ending were truly as bad as everyone seems to make it out to be, I think I would have been the first to notice. After all, I waited for years to discover the ending. I first read The Darkangel in third grade. Later after Pierce wrote the second book, I searched and searched for the book only to find it in a second hand store my freshman year of college. My college roommate was the one who searched for the third book, and she gave me the book for my college graduation. As you may guess, I had my own desires that Areil and her Prince would end up "happily ever after." However, I was not disappointed. The whole series has focused on the theme of responsibility and sacrifice. In the first book, Ariel sacrifices herself first to serve her mistress and later to save the good and destroy the evil within the darkangel. In the second, Ariel sacrifices her time and energy in trying to to recover the gargoyles and restore them to their former selves. The third book shows Ariel once again sacrificing herself so that the world may be a better place. Ultimately, the message of this trilogy is very religious and inspring in a world overrun by selfishness. Further, I think Ms. Pierce is a woman of incredible talent. I am now a graduate student of literature and I can honestly say that reading Pierce's novels early in life instilled in me a love of the written word that has yet to be quenched.
Copyright © 2022 Thriftbooks.com Terms of Use | Privacy Policy | Do Not Sell My Personal Information | Accessibility Statement
ThriftBooks® and the ThriftBooks® logo are registered trademarks of Thrift Books Global, LLC