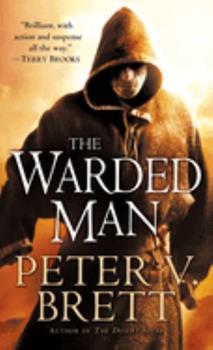 The Warded Man: Book One of the Demon Cycle

(Book #1 in the The Demon Cycle Series)

As darkness falls after sunset, the corelings rise--demons who possess supernatural powers and burn with a consuming hatred of humanity. For hundreds of years the demons have terrorized the night, slowly culling the human herd that shelters behind magical wards--symbols of power whose origins are lost in myth and whose protection is terrifyingly fragile. It was not always this way. Once, men and women battled the corelings on equal terms, but those...

Published by Mockingbird13 , 3 months ago
I thought this book was very good. The story switches between three main perspectives, and I thought each character was engaging enough to keep me hooked. I like the world-building, it's a very interesting concept and I expected to catch loopholes in the magic system, but was pleasantly surprised that it made a good amount of sense. The layered stone foundations preventing Corelings from rising inside houses was one good detail to explain why homes were safe, as was the inclusion of large warded nets above the city to prevent them from swarming from the sky. I thought the changes to society made by the forced isolation of communities was also interesting and made sense. Such as the difference between a rural community where everyone stuck together for survival and would open their homes and share their food with their neighbors vs. the cities where people could starve or be out on the streets. It also made sense to me that in a rural area like Tibbet's Brook, the art of warding would be something everyone knows enough of to keep their houses secure, since daily maintenance is important and if you only have 2-3 people who know how to ward and they die in a fire or an attack or of sickness...your whole community would be at risk. While in the cities warding is allocated to a few professionals, since the walls keep most Corelings out and if your house wards aren't up to snuff one night it's not a guaranteed death sentence. But yeah, I liked the world-building and the characters. I was pleasantly surprised at the number of well-developed female characters, too, including one of the three main characters, Leesha. I feel like all three main characters are pretty well-rounded and their motivations and goals make sense given their histories and personalities. I'm looking forward to reading the next installment in this series, The Desert Spear, and seeing the trajectory of their lives and where the plot is leading us.

Published by Granillo , 1 year ago
I bought a hardcover, instead I get sent mass paperback. What a scammer and rip off.

Published by Thriftbooks.com User , 5 years ago
I was pleasantly surprised by how much I enjoyed this book. Very unique and the author writes well. Starting the next book soon.

Published by Thriftbooks.com User , 12 years ago
I discovered "The Warded Man" by Peter V. Brett while scanning the new releases of the fantasy/science-fiction section in my local bookstore. Upon reading the first few pages, I was both intrigued and hooked. The intensity and curiosity sparked within the first chapter only grew throughout the course of the book until its dramatic conclusion. The story takes place in a world dominated by demons of various types, which rise from the ground at night and disappear once more as soon as the sun rises. Mankind's only defense against these demons are ancient wards used to magically deflect these creatures and create a safe barrier. The plot follows the lives of three characters: Arlen, Leesha, and Rojer. The reader is introduced to each character as a child and follows him/her as he/she ages and experiences the difficulties of living in a world restricted by demons. In my opinion, Brett pulled off the character tracking quite well, clearly illustrating first-hand the hardships and troubles each character endured at a young age and how that eventually shaped them as they grew and matured. Each of the three main characters is highly-believable and vividly painted. Brett also creates a creative and unique world that is exciting to become immersed in. I anxiously await the release of the next book in this very promising series! I highly recommend this book to any fantasy-lover, particularly anyone who enjoys Tolkien's Middle-Earth and "Lord of the Rings" as well as George R. R. Martin's "Game of Thrones" series. In closing, a quick note about the suitability of the content: the story deals with some sexual themes that may not be appropriate for young readers.

Published by Thriftbooks.com User , 13 years ago
Not since Mistborn have I been so captivated by a story and charmed by its setting. The Warded Man is an impressive debut and probably my favorite book of 2009 in any genre. If Peter Brett continues to write this way, he will need to clear space on his mantle for awards. The Warded Man is about Arlen, a villager who must survive in a grim fantasy world ravaged by demons at night. His character arc propels the narrative once he realizes that survival is not enough. Two other characters eventually join him in his exploits against the demons: Rojer and Leesha. I like how they are regular people--too many fantasies deal with long-lost princes, wizards, queens, and knights. The best thing I can say about the three main characters is that I cared about them. Since the author takes his time developing them from children to adults, you almos feel like you are growing up alongside them. When they suffer, you will cringe, but when they excel, you will cheer. The author's depiction of village age is authentic and folksy. Everything feels right--the gossip, the neighborliness, the barter, the sense of feeling apart from the other villages and cities. The world is dangerous, and not everyone gets along, but people set aside their differences when the demons strike. Later in the novel, the author describes city life just as well as village life, especially once Arlen reaches Krasia, a hub of a warrior society with Arabic influences. The novel packs action, adventure, romance, and substance. I like how it considers the nature of heroism, the futility of passivity, and even the plight of women. The scenes of combat between man and demon are gratifying, and the one romantic scene is heady with tenderness and passion. The author has a pleasing, crisp, lively style that serves the story and does not overwhelm it. Like many fantasies, The Warded Man ends with a teaser for the next book. For once, I am glad that a book does not end conclusively. I am counting days until Brett's next book. If you only read one fantasy in 2009, The Warded Man is the one to read.

Published by Thriftbooks.com User , 13 years ago
I'm a fantasy novelist, so sometimes reading any fiction--much less other epic fantasy--is a chore. Like a painter studying a painting, I tend to see the oils and the brushstrokes and can lose the joy of a great story. Not so with Peter V. Brett's marvelous debut. The concept is as visceral as fear of the dark, so smart you wonder why you didn't think of it, and so adeptly handled you have to double-check the cover to make sure Mr. Brett _is_ a debut author. The characters are engaging, and the action? Let's just say that I was actually disappointed when my cross-country flight landed, because I hadn't yet finished reading. And I fly coach. After 15 hours of planes and airports and three time zone changes, I still stayed up past 1 am to finish The Warded Man. All I can say is thank you for not debuting in the US last year, Mr. Brett. You might have buried me! -Brent Weeks, New York Times Bestselling Author

A well written fantasy with interesting characters and plot

Published by Thriftbooks.com User , 13 years ago
This novel starts with 11 year old Arlen who sees an act of cowardice when his mother is attacked by demons that changes the course of his life. The earth is beset by demons at night and mankind has lost the knowledge the ancients possessed to fight to fight them. In the north they wait paitently for their legendry saviour and hide from the death in the night behind defensive wards. This is a novel where it's the characters and the plot which is the star rather than elaborate world building which overwhelms everything else. I found this a compelling fantasy and I grew to like all the main characters as both time and their stories progressed as they moved into adulthood. This a fantasy series that has shot to close to the top of books I'm waiting on the next instalment to come out as quick as possible. If you enjoy a well written fantasy this book should be on your reading list and this is an author to watch.

Published by Thriftbooks.com User , 13 years ago
Brett's debut novel is well-told, action-packed, and as addictive as any book I've ever picked up. The main characters are introduced to us in separate vignettes detailing the momentous turning points in their youths that spur them to become the heroes they will later prove to be. In the world created by Peter Brett humans fear the night, and seek protection from the demons that rise from the ground at sunset to wreak havok (which mostly involves eating human flesh). The storytelling and snippets of humor keep the narrative lively and fresh, and while Brett's main character turns out to be rather humorless, the other people in the story are more than colorful enough to make up for that failing. This book has similiarities to Elantris (the wards of power) by Brandon Sanderson, Mystborn (creatures arise by night) also by Sanderson, Robert Jordan's earliest books of the Wheel of Time, and a speck of George R.R. Martin. There is more humor in Brett's novels than those of the other authors, and the action is taut and frantic. If you enjoyed any of those authors' books, or the writing of Patrick Rothfuss, you're going to love The Warded Man.
Trustpilot
Copyright © 2022 Thriftbooks.com Terms of Use | Privacy Policy | Do Not Sell My Personal Information | Accessibility Statement
ThriftBooks® and the ThriftBooks® logo are registered trademarks of Thrift Books Global, LLC