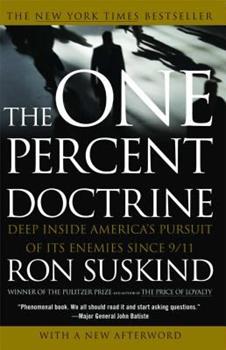 The One Percent Doctrine: Deep Inside America's Pursuit of Its Enemies Since 9/11

Pulitzer Prize-winning journalist and bestselling author Ron Suskind takes you deep inside America's real battles with violent, unrelenting terrorists -- a game of kill-or-be-killed, from the Oval Office to the streets of Karachi.

Published by Thriftbooks.com User , 15 years ago
"The One Percent Doctrine" is a meticulously researched and fascinatingly presented portrait of an American administration which has absolutely run amok. Given that the United States of America is the preeminent global power, it is terrifying that its president, who is certainly not the brightest bulb in the chandelier, relies so very much on his "gut" and on forgetting that (and why) the Founding Fathers of America decided to keep religion and government firmly separate. (It is, additionally, no less terrifying that the people of the United States elected this person twice.) No less frightening is the semi-fascist who is "one heart attack away" from the White House, Dick Cheney. His "shoot first and don't even bother with the damn question later" approach to life has, as Ron Suskind thoroughly demonstrates, done more to increase visceral hatred for the United States in the Arab world (and not only) than anything else the USA has ever done before. Particularly as the 2008 election approaches, this book must be read to understand how far down the garden path Dubya and his black, black, black cardinal-behind-the-throne have led America. The ridiculous debates over gay marriage and such are absolute smokescreens to mask the fact that these men have run roughshod over civil liberties and American democracy as such. I applaud Ron Suskind for the hard work he has done in writing this fundamentally important book, and I invite everyone who is conerned about the future of America to read it!

Published by Thriftbooks.com User , 15 years ago
In the context of non-fiction literature, I consider this book to be the co-equal of Graham Allison's classic, "Essence of Decision: Explaining the Cuban Missile Crisis." It joins Bob Woodward's "Bush at War" and the more detailed James Risen's "State of War" as core references. This book specifically and clearly documents three facts: 1) Vice President Cheney is impeachable for dereliction of duty and obstruction of due process in government as well as many violations of international and domestic law. While I do not see the President as quite the puppet some represent him to be, he is certainly childish and petulant and angry at his father (page 107: "I'm not going to be supportive of my father and all his Arab buddies.") Cheney and his neo-cons nurtured the young President's inclination to "unleash" Israel against the Palestinians, and Cheney is specifically impeachable for not providing the President with a copy of the Saudi Arabian memorandum of grievances that preceded a summit at the ranch which was of MAJOR importance to the entire Middle East situation. The author excels at showing how Dick Cheney has "experimented", from President Ford onward, with specifically NOT briefing the President, ostensibly to give him plausible denial but in this instance, more as a means of Cheney's deposing Bush as the actual head of State. 2) I cannot take the second step of suggesting that Bush himself is impeachable on the basis of this book. What I see--and the author excels at social-psychological insights across the entire text--is an insecure young man with excessive faith in his gut instinct, loosely-educated, hostile about experts and especially mature experts like Brent Scowcroft, and all too eager to prove his (inadequate) manliness by being belligerent and often a bully. "Bring it on." The author of this book combines analytic insights into the character of the President, with detailed discussion of the degree to which the White House completely ignored the policy process to "do what they want, when they want to, for whatever reason they decide." On the basis of this book, one can conclude that Cheney should be impeached and Bush still needs a good spanking from his father. In this context, the author provides a memorable quote on page 227, "America, unbound, was duly led by a President, unbound" and also "free from conventional sources of accountability." 3) The third major focus of this book is the combination of incapacity of the CIA and the FBI and the Pentagon in evolving to deal with the post-9/11 challenges. The FBI comes off as the most inept, consistently unable to do its job on the home front. Rumsfeld is next in line for condemnation, and while the author is very professional in his review, he quotes Rumsfeld as saying that "every CIA success is a DoD failure," and he quotes then Vice President Nelson Rockefeller as considering Rumsfeld to be "beneath contempt." One can only be stunned as the six years going on eight

Published by Thriftbooks.com User , 15 years ago
This latest offering from renowned journalist Ron Suskind, "The One Percent Doctrine", proves the wisdom of the old adage regarding truth being stranger than fiction. At the same time it also serves up a number of egregious examples of just how far reaching the terrible recklessness and near total disregard for truth and law in the fateful decisions made by the Bush administration in the three year wake of the events of 911 has been for the nation and the world at large. At heart, Suskind contends, is an absurd Cheny perception that even a "one percent' probability of a terrorist attack requires immediate pre-emptive action. Given such a fascistic and dangerous interpretation of America's presumptive place in the contemporary world, it is no wonder we have gone so recklessly far astray. Indeed, it appears as though in making the world `safe from terrorism,' we seem to be have been willing to suspend any critical oversight of the Executive branch, to allow the current administration make a mockery of the supposed restraints existing among the several branches of the federal government, and to do so by so taking the U.S. Constitution on a plunge so deep into the depths of the icy blue waters of obfuscation and circular logic that one wonders if the Founding Fathers have the bends. Under the current circumstances, one has to wonder if the federal government is this free to so prevaricate, engage in character assassinations, withhold truth and important facts, and do whatever it deems prudent in the pursuit of its goals, regardless of its legality or illegality, then just what kind of constitutional republic we really have operating here. One that perhaps bears an uncanny resemblance to the early days of the Third Reich, when Hitler used similar arguments to shout down his opponents and subvert the laws, one by one. Sadly enough, like then, these days almost no rises to shout back in vocal defiance of this transparently solipsistic view of the separation of constitutional powers or the excesses of Executive action. According to Suskind, there is overwhelming proof that those at the highest levels of the food chain within the insular Bush White House, including both Vice President Dick Cheney as well as the President himself, consciously and deliberately used the events of 911 as a screen to pursue preconceived goals, many of which, like Iraq, were actually virtually unrelated to the events surrounding 911, and that the pursuit of Saddam Hussein in particular was seen as constituting an opportunity to create an example of how the new America of the neoconservative right would deal with tyrants and enemies they found along the way toward the new American hegemony they lusted after. Now, firmly ensconced in the quicksand of Iraq (one dare not call it a quagmire!), these morons continue to recklessly shed American blood as they learn, with what has become painfully monotonous regularity, the limits of American power in a complex, multifacted wo

The truth that must be told!

Published by Thriftbooks.com User , 15 years ago
Mr. Suskind has completed an important work of journalism that should have us all considering and reevaluating what we think has been going on since 911--no matter what are political stripes are. After reading this I was forced to rethink some of my world views. You learn that US government is being forced to fight a new kind of war, one that officials truly do not yet have handle on. Who is the enemy? How do we find and engage them? Can we ever fully defeat them? The book reveals, that while there is plenty to be discouraged about there have been many times since 911 where the terrorist have been defeated saving possibly thousands of lives! But Suskind also shows how the terrorist have morphed their strategies after the government's early successes. This is a real life spy thriller with the lives of thousands at stake. There is more than one astonishing disclosure in this book, any one of which is worth the purchase price of this book. This has been the most fascinating work of nonfiction I have read in the last few years.

Published by Thriftbooks.com User , 15 years ago
this book is another outstanding and provactive book by the author. as usual his sources are great and the book reads like a novel.the subject is after 911 and the governments response with the cia and the politics its main focus; revelations in both areas.if you read this book also read COBRA 2. both these outstanding and well researched books will present to you a complete picture, good and bad what people in our government have done after 911.
Trustpilot
Copyright © 2022 Thriftbooks.com Terms of Use | Privacy Policy | Do Not Sell My Personal Information | Accessibility Statement
ThriftBooks® and the ThriftBooks® logo are registered trademarks of Thrift Books Global, LLC