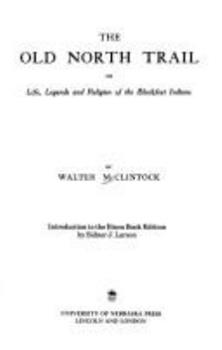 The Old North Trail: Life, Legends, and Religion of the Blackfeet Indians

In 1886 Walter McClintock went to northwestern Montana as a member of a U.S. Forest Service expedition. He was adopted as a son by Chief Mad Dog, the high priest of the Sun Dance, and spent the next four years living on the Blackfoot Reservation. The Old North Trail, originally published in 1910, is a record of his experiences among the Blackfeet.

Published by Thriftbooks.com User , 12 years ago
Thanks to the author for his efforts in describing his experiences as an adopted Blackfoot in the late 1800's and early 1900's! He describes his life with the Blackfeet, and provides detailed descriptions of their social customs, religious practices, general demeanor, world view, etc.. Highly recommended!

Published by Thriftbooks.com User , 14 years ago
Fresh out of Yale, McClintock went to Montana in 1891 as an employee of the forest service. He ended up living with the Blackfoot tribe and learning their way of life. One elderly chief, Mad Dog, adopted him and taught him tribal culture and rituals so that someone would write them down. This book is the result. The bison were gone and the Blackfoot economy lay in tatters. Still, McClintock's band was following his traditional seasonal movements, keeping the Sun Dance, and trying to live as they always had - - even as everyone realized that their way of life could not survive in the face of the white man. McClintock serves as a very sympathetic scribe for the tribe. He was clearly a good listener. One Blood chief in Alberta told him that he had vowed never to speak with white men again, and yet he ended up adopting McClintock as a son. Because the tribe trusted him, he was admitted into a tribal society, invited to participate in rituals, and so forth. Through most of the 500 pages in this book, McClintock takes a very fair-minded approach to both the Blackfoot and to white society. He often notes how tribal norms, such as sharing, are superior to the behavior of more "civilized" peoples. He takes both Christianity and tribal religions seriously. Oddly, all this falls apart in the last chapter, where he endorses destructive policies that take away tribal land, convert the Indians to Christianity, and force assimilation on white terms. This chapter contradicts the tone of the rest of the book so deeply that I can't imagine what he was thinking when he wrote it. Aside from that last chapter, this is a fascinating record of the tribe's traditions at the last possible moment that the tribe was still living its traditional life.

One of the few books I still love

Published by Thriftbooks.com User , 16 years ago
How could it be possible to adequately describe such a powerful -indeed, magical- account of a young man's time with the Blackfeet in the early twentieth century, a time when much of the Old Ways still lived among the Blackfeet people. I have owned or or another edition of The Old North Trail since 1970, and have ever since then been entranced by McClintock's unselfconscious limpid prose style, his descriptions of a summer snowstorm, or a grand encampment of the Blackfeet, the way Indian people in northern Montana prepared and stored food for the coming of winter, or the simple, deep, and everlastingly real relationship with a culture which was even at that late date still indescribably precious and beautiful. Both a superb travelog and a microscopically observed anthropological account of life with the Blackfeet, this book is an extended love letter to the Indian people with whom Walter McC lived. As I write this review I'm transported back to my early twenties, a California surfer just out of college, immersed in a hot deep bath, reading The Old North Trail at sunup in Inverness, Scotland, and forgetting where I was, so completely did this book cast its spell. This is one of the very, very few books with which I am still in love.

Published by Thriftbooks.com User , 23 years ago
Walter McClintock was a young man who came to the Blackfeet Country at about the turn of the century. He was a trained scientist who could use a camera and he kept careful notes. This is not a romance novel nor anthropological interpretation. McClintock was simply there and made friends well enough to be accepted. He recorded stories, rituals (also took photos), and daily incidents as well as much natural history. He was really there and he is an honest and graceful reporter.
Trustpilot
Copyright © 2022 Thriftbooks.com Terms of Use | Privacy Policy | Do Not Sell or Share My Personal Information | Accessibility Statement
ThriftBooks® and the ThriftBooks® logo are registered trademarks of Thrift Books Global, LLC