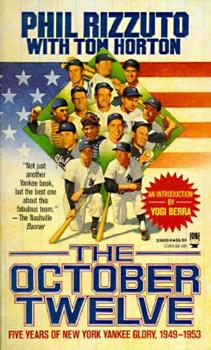 by Tom Horton and Phil Rizzuto

Although the New York Yankees have won 22 World Championships--far more than any other team--only 12 men have earned the Gold World Series Ring. Recounting their unforgettable story, the author tells of his five most exciting seasons and how he and his teammates achieved the impossible dream.

Published by Thriftbooks.com User , 19 years ago
Phil Rizzuto was part of the remarkable achievement, along with his New York Yankee teammates he writes about, of winning 5 straight American League pennants and subsequent World Series titles. Some of the anecdotal information, as stated by reviewers, is incorrect, based on relying on Rizzuto's memory over events being recalled many years later. The interesting aspect of the book is looking into the mindset of one of the truly great shortstops to play the game, who also was a part of some of the greatest teams ever to step on a big league diamond.Rizzuto pulls no punches when it comes to his Yankee manager Casey Stengel, who turned thumbs down on Rizzuto after a tryout when he was earlier manager of the Dodgers. Rizzuto questions some of Stengel's unconventional strategy, such as using Mickey Mantle as a leadoff hitter. Some of the patented Stengel humor comes across nonetheless, such as his comment that every time junkball pitcher Ed Lopat worked for the Yankees people would come out of the stands and ask the manager for a chance to pitch on the theory that if the pitches looked that slow (and deceptively easy to hit) that they could do the job as well.Rizzuto gives a lot of credit to the Yankee pitching staff in helping achieve the 5 straight World Series titles. Baseball historian Roger Kahn, who covered the Dodger beat in the fifties, reasoned that Brooklyn had a narrow edge when it came to matching up with Yankee regulars, but that the difference came with the pitching. Rizzuto reveals how wrong the Cleveland Indians were to let Allie Reynolds go on the erroneous pretext that he just didn't have the heart or competitive instinct to make it to the top rung. Tell that to the hitters who faced him during his Yankee days! Along with writing about the other brilliant Yankee starters of the period, Whitey Ford and the aforementioned Lopat, and throwing bouquets to reliever Bob Kuzava, who made a habit of excelling at World Series time, Rizzuto speculates on what might have been if the top brass had not traded Vic Raschi, New York's other celebrated starter, to the St. Louis Cardinals after the '53 season. The Yankees chalked up 103 wins in 1954 but finished in second place eight games behind the Cleveland Indians. Rizzuto speculates that, had Raschi remained with the Yankees, the team might have been able to extend its remarkable record for one season or beyond following the 5 world titles in a row. This makes for interesting speculation, the idea that this remarkable string could possibly have continued at least a little longer.
Copyright © 2020 Thriftbooks.com Terms of Use | Privacy Policy | Do Not Sell My Personal Information | Accessibility Statement
ThriftBooks® and the ThriftBooks® logo are registered trademarks of Thrift Books Global, LLC