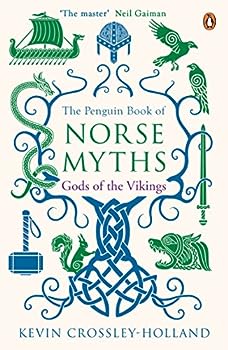 The Penguin Book of Norse Myths: Gods of the Vikings

This description may be from another edition of this product. Here are thirty-two classic myths that bring the pre-Christian Scandinavian world vividly to life. Gods, humans, and monstrous beasts engage in prodigious drinking bouts, contests of strength, greedy...

Published by Thriftbooks.com User , 20 years ago
The book brings Northern mythology to life. Kevin Crossley-Holland retells the myths in a flowing, easy-to-follow, contemporary style. This is also a very comprehensive collection of myths that includes thirty two stories, some of which cannot be found in more slender volumes. The book also contains an introduction, notes, glossary, bibliography, and index.The introduction is probably the most helpful of all introductions I found in books on Northern mythology. It starts with the role of geography in the shaping of Northern myths and proceeds to explain the cosmology and the pantheon of the ancient Anglo-Saxon peoples. It even contains a graphical representation of the mighty world tree Yggdrasill, which is very helpful in understanding the structure of various realms of the world of Northern mythology.I cannot tell enough good things about the myths themselves. And the only way to appreciate them is to read them. The first myth in the book is the myth of creation, and the last myth is, of course, Ragnarok. The notes complement the tales and can be read after you are done with all the myths. I find many notes enlightening. I highly recommend this book

Published by Thriftbooks.com User , 20 years ago
I picked this book up after I ran across many kindred websites suggesting this as text that would help one to understand norse mythology. Before C-H even begins the tales, he sets up a general overview for you so that you are "on familiar ground" when you are reading the myths and have an understanding of the layout of the worlds. What is even more pleasing is that he has a picture layout of the nine worlds (for those who like 'visuals'). The Myths were set up in a storytelling format that is easy to read and enjoy....in otherwords its not 'textbook' style. Also, he has a lot of notes for each tale at the back of the book that go into depth about all the texts he used in his retelling of the stories as well as some interpertation of what the stories were getting at. I highly recommend this book for those people who are interested in learning about norse mythology

Published by Thriftbooks.com User , 21 years ago
The author starts off with a 25-page or so introduction to the myths, covering the Norse world, cosmology, the pantheon of Norse gods, the sources, and the general structure of the myths.The heart of the book consists of 32 myths, arranged in basically a chronological order - beginning with the creation of the world / Ymir, and ending with Ragnarok.This is followed by notes (of a more academic nature) keyed to each of the 32 stories, where he gives additional information, sources, parallels in other cultures, and interpretations.The writing style moves well, and the myths are told in a way that holds the reader's interest. Younger folks may well need to start with something a little simpler, like D'Aulaire or "Gods & Heroes from Viking Mythology" published by Schocken Books, but for adult readers looking for an intelligent introduction to Norse mythology, this book can't be beat.

Invaluable in the study of Norse Mythology.

Published by Thriftbooks.com User , 22 years ago
I bought this book as a part of an analysis of Norse Mythology, and found it more than useful. Not only does the author show the myths in a new light, but also includes and in-depth background of each myth and an informatve introduction. The bibliography has seperate headings for each topic of research, and the glossary is useful for those who have trouble keeping track of the often confusing names.

Strange and disturbing stories we think we know.

Published by Thriftbooks.com User , 23 years ago
Adult retelling of stories we think we know from the surviving original sources. Reading Crossley-Holland's book is like reading the real Grimm's Fairy Tales -- they are much stranger and more disturbing than you remember from the kiddie show about Thor and his hammer. The Aesir are a doomed race of flawed, violent, sometimes cruel but ultimately heroic gods. Odin is not always a benevolent father, but also is obsessed with knowledge and willing to kill, deceive and suffer intensely to get it. Freya is not only a war-goddess but a kind of personification of sex. The stories cover the building of Asgard, an ur-War between the Aesir and the ultimately allied Vanes, struggles between the gods and the Frost Giants, the mischief and ultimately evil of Loki, and an array of malevolent dwarves and monsters with names like Niddhog (the worm that gnaws the root of the world-tree Yggdrasil, Fenris the wolf of the end of the world. Incidentally, Tolkien got many of the names of his characters from the sources. Highly recommended.
Copyright © 2020 Thriftbooks.com Terms of Use | Privacy Policy | Do Not Sell My Personal Information | Accessibility Statement
ThriftBooks® and the ThriftBooks® logo are registered trademarks of Thrift Books Global, LLC