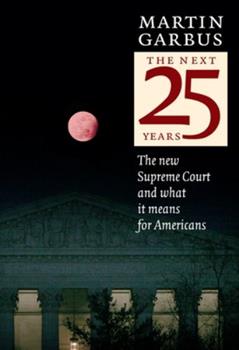 The Next 25 Years: The New Supreme Court and What It Means for Americans

In The Next 25 Years, renowned First Amendment lawyer Martin Garbus examines what will be the impact of the new Supreme Court on the future of our republic. Drawing on extensive knowledge of Constitutional law and legal precedents, Garbus, one of our most astute legal historians, defrocks the executive branch's grip over the judiciary as an extension of its own executive powers. He warns of the threat of an incoming textualist bench that wishes to...

Published by Thriftbooks.com User , 14 years ago
Attorney Martin Garbus, in the social tradition of Clarence Darrow, has laid out in concise but stark terms the damage that the now-dominant, right-wing ideologue Supreme Court justices have done to constitutional and human rights. He forecasts that if their 5-4 past decisions are prologue, then the future for the next 25 years is not bright for those who believe that no one is above the law. This book is must reading for anyone who is concerned about fairness and compassion in the meting out of justice by the federal judiciary. It is an easy-to-read constitutional history of the most significant cases and their effects on Americans. There are a few errors that should have been caught during the review and editing. For example, on page 56, the name of Richard Mellon Scaife is given as Richard Scaife Mellon, and on pages 110-111, the date of Baker v. Carr is incorrectly listed as 1959, rather than the correct date of 1962. It is correct in note 42. And a final example will suffice. On page 132, Justice Byron White is incorrectly identified as his 19th century predecessor Justice Edward White. However, these errors do not detract from Mr. Garbus' cogent insight and call to action of all who believe, as he does, that "We need justice now[!]" On a personal note, as a Louisiana native and student of its history, I was aware of the Colfax, LA, riot and murders of April 13, 1873. However, I was not familiar with United States v. Cruikshank (1876) that arose from the attempted criminal prosecution of the Colfax murderer s (p. 90). And I was certainly not aware that Justices Rehnquist, Scalia, Thomas, Kennedy, and O'Connor had resurrected this Reconstruction-era bias as a precedent in Morrison v. United States to rule on May 15, 2000, that "Congress had no power to punish private violence motivated by gender" (p. 90). Another pernicious Louisiana case, Plessy v. Ferguson (May 18, 1896), has been cited by the Rehnquist and Roberts courts to "provide the basis of future decisions on issues ranging from abortion to civil liberties to race and gender persecution" (p. 70). Plessy v. Ferguson is the Supreme Court case sanctioning segregation in which the Court ruled that "separate but equal" facilities were constitutional. Plessy was not overturned until Brown v. Topeka Board of Education in 1954.

Tells you what's going on...

Published by Thriftbooks.com User , 15 years ago
With the recently re-aligned Supreme Court, I wanted to know what is going on and what could happen to our legal system. This book gives it to you in clear language with a high level of depth and detail. Trial lawyer Martin Garbus, who has appeared before the Supreme Court many times, explains the sweeping changes that can be handed down from the Court and just might shake the foundations of this country. It's a really good read, and I'm glad I picked it up.

A Chilling Analysis of the Future of the Supreme court

Published by Thriftbooks.com User , 15 years ago
In 2000, when the Supreme Court crowned George W. Bush President of the United States, friends of mine argued that Bush would be a one term President and would create little damage to our foreign policy, or to any of our institutions. They were wrong on all counts. In his book, The Next 25 Years: The New Supreme Court and What It Means for Americans, Martin Garbus outlines just how deep and long term the effect of Bush' s Supreme Court appointments will be for our country. With the appointments of Samuel Alito and John Roberts, the court has moved seriously to the right rejecting precedent and chipping away at some of the court's most important rulings regarding privacy, religion and states' rights. Garbus outlines recent court decisions taking the reader through the conservative arguments. He demonstrates how these decisions are part of a conservative plan implemented by the Bush administration's court appointees which will undo major liberal decisions since the Warren court. His analysis is alarming and should be read by everyone who is concerned about the future of our democracy.

The Best Supreme Court Book Yet

Published by Thriftbooks.com User , 15 years ago
This is a wonderful book. Like his previous book, "Courting Disaster," Martin Garbus tells what really happens in the Supreme Court. He also describes the Court from a political viewpoint and goes through each of the court subjects and shows how each judge comes out. It's detailed, knowledgable and a pleasure to read. I'm not a lawyer, and I loved it.

Published by Thriftbooks.com User , 15 years ago
It is hard not to be frightened by Martin Garbus' new book. I've been a fan of the legendary Garbuis since his early books (TOUGH TALK and TRAITORS AND HEROES), which covered his swashbuckling career as one of the nation's pre-eminent first amendment lawyers. His clients -- from Lenny Bruce to Vaclac Havel to Spike Lee -- are a list of the powerful and important, and Garbus' work defending them is fascinating. But this book is something different. Instead of revisiting past cases, Garbus looks to the future -- specifically, what the next quarter century holds for America given the makeup of the incredibly conversative Roberts court. Given the ages of the most conservative members -- Scalia, Roberts, Alito and Thomas -- these guys will be around and voting as a bloc for a long time to come. If you think the Rehnquist years were bad, you ain't seen nothin' yet. What Garbus sees happening as a result is very upsetting -- nothing less than a conservative revolution to undo every progressive decision on the Supreme Court since the New Deal. No more reguolatory laws controlling Wall Street, no more environmental regulation, no more protection for workers and minorities, no more protection for abortion (though this will not be attacked directly), no govrenment agencies regulating American business, nothing whatsoever to balance the private sector run amok and the evils of prejudice and discrimination. It's a nightmare vision, but it's no nightmare -- it's all to real. And Garbus elucidates the developments, and the history bhind them, in a clear, simple and dramatic way. If you want to know what's going to happen on the Supreme Court -- and therefore in all of our lives -- in the next 25 years, this book will show you the very scary truth. Take it as a call to action. and make sure we don't let any more conservatives on the court for a long time to come!
Trustpilot
Copyright © 2022 Thriftbooks.com Terms of Use | Privacy Policy | Do Not Sell or Share My Personal Information | Accessibility Statement
ThriftBooks® and the ThriftBooks® logo are registered trademarks of Thrift Books Global, LLC