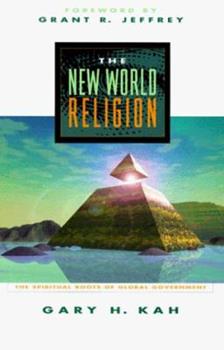 The New World Religion: The Spiritual Roots of Global Government

This description may be from another edition of this product. No seperation of Church and State here. A look into the spirtual roots of government.

We receive 37 copies every 6 months.

THE HIDDEN AGENDA OF THE NEW WORLD RELIGION

Published by Thriftbooks.com User , 17 years ago
THE NEW WORLD RELIGION by Gary H.Kah. 330 pp. Noblesville, Indiana: Hope International Publishing, Second Printing 1999. ISBN 0-9670098-0-4 (pbk) Gary Kah's book provides us with a well-written, well-documented and startling account of the rise and development of the New World Religion which an increasingly tyrranical United Nations fully intends to eventually force upon everyone. Kah locates the origin of this new and extremely dangerous belief system in the writings of, among others, Helena Blavatsky, Alice Bailey; Carl Gustav Jung and Teilhard de Chardin, and he sees its most powerful promoters today as being the Pope, Mikhail Gorbachev, and the UN.As a Bible-believing Christian, Kah is able to clearly demonstrate that this new religion is nothing less than Satanic and that it heralds the arrival in our world of the Antichrist. Those who do not share Kah's Christian beliefs might, with equal reason, prefer to see the New World Religion as simply being Communism repackaged in gaudy new pantheist-environmentalist clothes .Communism, after all, has a very bad name. We all know that it doesn't work. We also know that it is the most evil, vicious, and murderous system ever devised. And since no-one today is going to fall for the shabby and moth-eaten Marxist-Leninist line, some very brilliant people evidently got together and dreamed up a new approach. So instead of THE COMMUNIST MANIFESTO we now have THE EARTH CHARTER and THE GLOBAL ETHIC. And instead of WORKERS OF THE WORLD UNITE! the new slogan has become LOVERS OF PLANET EARTH UNITE! Gone is the old story that it is the workers of the world who are being exploited by evil capitalists. The new story is that it is the planet itself that is being exploited by all of us evil consumers. It is being destroyed by Global Warming, Pollution, Resource Scarcity, Overpopulation, Species Extinction, etc., etc. Or so we are told....But not to worry, folks, because the Pope and Mr Gorbachev have discovered a wonderful solution to the planet's ills, the New World Religion as set out in THE EARTH CHARTER and THE GLOBAL ETHIC. And if you don't want to find yourself reclassified as an enemy of the planet (and eliminated) you're just going to have to go along with this new belief system when the UN orders you to. To understand Communism is not very difficult. As Gary Allen has pointed out, it was not a movement of the downtrodden masses and it was never about sharing the wealth. It was a movement financed by the economic elite as a method of consolidating and controlling the wealth of an entire country. It was a perfect tool of power-hungry megalomaniacs. But, and this is the point, so is the New World Religion. So please read Gary Kah's invaluable study. Yes, I know he's a Bible-believing Christian, and we have all been brainwashed by Hollywood and the mainstream media into thinking that Christians are crazy. Some of them may be, but many are perfectly decent folks and even the worst of

excellent, the best of it's kind

Published by Thriftbooks.com User , 18 years ago
If you are looking through lots of books on this subject and can't make up your mind which one to get--- Get this book! But first pick up his other book En Route to Global Occupation. You'll notice that Gary Kah doesn't come out with a book a year. He doesn't seem interested in making money selling lots of books. He puts all of what he's got to say into these books! Christian parents will find this book valuable to help prepare their children for what they will face in their future regarding Jesus and world religion. Indispensible reading!

Published by Thriftbooks.com User , 19 years ago
Having been into New Age before becoming a Christian, I could identify with their utopian belief systems. It was eerie reading the quotes from New Age literature in Mr. Kah's book; what I once accepted as 'spiritual truth' now made me sick to my stomach. In addition, the experience of reading the book exposed the remnants of New Age thought still lurking in my psyche.I've been following the New Age-United Nations-New World Order connection in conjunction with 'End Time' Biblical Prophecy for a couple years. Mr. Kah's book is an excellent study on the interconnections among these movements. I would recommend it highly to anyone with similar interests.In addition, this book is a 'must-read' for Christians because New Age and Interfaith ideologies are beginning to influence Christian thought. Understanding the root belief systems behind these ideologies is critical to spiritual discernment.

Impeccable in its research, concise and to the point!

Published by Thriftbooks.com User , 22 years ago
Having read a previous Gary Kah book I was afraid that this one would overwhelm readers too. Gary's best assest is his biggest problem, the fact that he is a terrific researcher. Such is not the case with this latest entry.The New Age movement is a complicated mass of false religious systems dating back to the Tower of Babel. Gary takes them as a whole and shows the reader exactly where this system is headed. From the religious and social implications to the political and environmental, Gary's research shows us that we are closer to anti-Christian upheaval in the name of peace than we ever thought.What's most interesting is the Catholic tie in. Gary proves that Catholicism has, right now, the inside track to being the official religious arm of the U.N. He also does a great job in documenting the Catholic/New Age relationship.

One of the Most IMPORTANT Books of the year!

Published by Thriftbooks.com User , 22 years ago
From the occult roots of global government to the United Nations "spiritual" influence within education, this books covers the subject of the "New World Religion" like no other. I found Kah's coverage of the United Nations affiliated "United Religions Initiative" -- a type of UN for religion -- to be of vital importance. You need to know about this organization and the events surrounding it! More than that, Gary published the Jesuit oath in the appendix. This is one of the most revealing pieces of documentation I have ever seen! If you want a book that intelligently tackles international events, exposes the occult roots of world government, and documents the move to a one-world religion, this is it! The documentation alone is worth the price -- there must be almost three hundred endnotes! But don't let that scare you, Kah wrote this in such a way that practically anyone can read it. And with a topic that's as in-depth as this one, readability is vital. Gary Kah did a bang-up job. Get this book.
Copyright © 2020 Thriftbooks.com Terms of Use | Privacy Policy | Do Not Sell My Personal Information | Accessibility Statement
ThriftBooks® and the ThriftBooks® logo are registered trademarks of Thrift Books Global, LLC