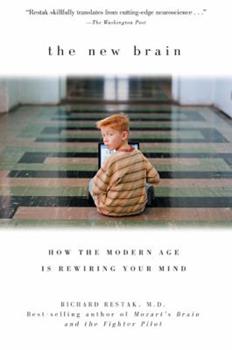 The New Brain: How the Modern Age Is Rewiring Your Mind

Now Available in Paperback The era of the New Brain is upon us Already our brains are working differently than they did just one hundred years ago. Drugs are already available that work in the brain to prevent us from feeling drowsy, depressed, anxious, or fearful, or that enhance concentration and memory. Dramatic treatments to repair damage in the brain are becoming common. In The New Brain, neurologist, neuropsychiatrist, and bestselling author...

Insightful and to us regular folks fascinating

Published by Thriftbooks.com User , 15 years ago
I thought this was a great book especially to a layperson who may not completely understand all the technical terms. I thought the way that he laid out the book made it very easy to read. A lot of time books written for science are way too technical to enjoy. I like how he explained the general area "Cerebral Georgraphy" then shared his interviews with other professionals from different institutions from around the world. Good structure. Read it especially if you want to learn more about the brain and developments you can expect to see in the coming years.

Parent, teacher, grandparent? You should read this book

Published by Thriftbooks.com User , 16 years ago
This is a very thought provoking book about how our brains are wired and how they work. The book is very readable and does a good job of explaining how our brains work and how research is showing that our brains are much more elastic and dynamic than previously believed. I believe that any parent or teacher must read the chapter 'More Images Than Ever'. Restak looks at how various parts of the brain work together to control our behavior and the effect of television and movie images on this wiring. He's careful to point out that this is current theory, and not absolute fact. When I'd finished this chapter I resolved to change the kind of images that I allow myself to be exposed to, and to be much more careful about what my children see. Overall this is a positive book that looks to a future where we are much more aware of how our brains function and how to use them and expand our capabilities in benefical ways.

One of the Most Profound Books on the Human Brain

Published by Thriftbooks.com User , 17 years ago
The New Brain is a fascinating look into the inner working of the human brain. Readers will probably remember Dr. Richard Restak from his 1980's P.B.S. series: "The Brain" and "The Mind". His newest installment looks at what we are learning about the physiology of the brain through new techniques such as functional M.R.I. and P.E.T (Positron Emission Tomography). All teachers will find the newest evidence about learning and memory not only profound but also useful in the classroom. Dr. Restak concludes, " If you want to learn a new skill or make use of new knowledge, you must change your brain". We now understand that "by engaging in repetitive exercises we can set up relevant circuits (in the brain) and sharpen their expression". In short, modern research has shown that genius or superior performance in nearly every field of human endeavor is attainable by nearly everyone! Dr. Restak explains that no single genetic factor is responsible for superior performance but instead an understanding of how to train the brain to achieve higher levels of control over every part of performance. Have you ever wondered why A.D.D. (Attention Deficit Disorder) is so common in modern society? Are all the violent images children are seeing in the media having an impact on the development of our brains? What are the new imaging techniques telling us about the drugs doctors use to treat depression and other brain disorders and will this give us better ways to treat mental illness? These are some of the many topics Dr. Restak discusses with an amazing clarity and does not require a degree in neuroanatomy. The "old brain" from just a couple decades ago was static and made of anatomical structures we all learned in health or science classes. The "new brain" is a profound shift in our understanding. We have begun to contemplate the physiology of our brains and the tremendous impact of the modern world.

Helps Us Understand the Effects of Behavior on the Brain

Published by Thriftbooks.com User , 17 years ago
Not only does our brain influence our behavior, our behavior and the choices we make influence the very structure of our brains! This is the basic proposition of Restak's work, and his documentation of that proposition is convincing.Although the brain is a complicated and technical subject, Restak writes for the layman and explains how our choices (e.g., viewing violent movies, choosing to practice an instrument with diligence, or even enjoying humor and laughter) affects our brains -- physically.Modern research has proven that the brain has much more plasticity (flexibility and ability to change) throughout life (not just during youth) than previously believed.Although Restak does not give enough credit to inherited abilities and tendencies (in my opinion, he needs to address studies among identical twins raised apart), it is still interesting to note how practice and discipline actually change the brain's structure.My favorite portion addresses how images (TV, movies, photos, etc.) destabilize our brains, and how that watching a fictional event is processed by our brain as an actual event. The result is that portrayals of violence make us stressed, fearful, and more prone to be violent ourselves, almost as though we had participated in the acutal events portrayed.He addresses music, ethical issues involving medication, and leaves us with predictions about new medical treatments involving melding the brain with modern technology.All in all, this was an interesting and informative read. Great for anyone who deals with people or is concerned about social issues.

Published by Thriftbooks.com User , 18 years ago
Our brains are changing, says Dr. Richard Restak in his latest book, an engaging tour of the frontiers of modern brain research. According to him, we are entering the age of the New Brain where new technologies like genetic mapping and imaging technology will reveal to us for the first time the mysterious secrets hidden within our skulls. And he is superbly qualified to lead us on this adventure into neuroscience.Dr. Restak is a neurologist and neuropsychiatrist and an expert in brain function and the ongoing research of brain physiology and development. He is a clinical professor of neurology at George Washington Medical Center in the nation's capital and author of more than 15 books on the brain and brain function and appears often in the national media as a popular commentator on scientific research.What, in general, is the book about? Well, it is about genetic mapping, imaging technology, psychopharmacology, the fact that our brains are working differently from how they did a century ago, in what manner and why the demands of our modern world are bringing about changes in the brain itself, the dramatic new treatments that can repair damage in the brain, the way new drugs can influence how the brain operates and what behaviors can and will result, and the probability that technology, rather than biology, will play the major role in the evolution of the human brain.This is a compact book (only 212 pages of text) for books dealing with such complex topics, but that may well be to its advantage. It is, after all, written for the ordinary person and not the expert and therein lies its value. Members of the general public need to know what is going on in the area of modern brain research and what impact some of the new technologies in neuroscience may have on their lives. Furthermore, there are potential misuses of and abuses in some of these technologies, there are moral or ethical issues present, and all of us need to have enough knowledge so we can make informed decisions about how we want to permit this new research to affect our lives.Rather than attempt to provide an overview of all or most of the major topics in Restak's book, let me focus briefly on three revelations that Restak presents from the current research which are sure to be controversial and I found particularly intriguing.The first one is that it may be possible that brain imaging techniques such as functional magnetic resonance imaging (fMRI) can indicate when you are telling the truth and when you are lying, a tool that would certainly be valuable to a prosecutor and jury if evidence from such a technique was ever accepted by courts of law. Another technique called Brain Fingerprinting, which detects changes in the brain's electrical activity, has already been used in criminal investigations and Restak cites one example where the investigation led to a life sentence in prison. Interesting stuff, that. And the efficacy of such tools will surely be widely debated on the popular m
Copyright © 2020 Thriftbooks.com Terms of Use | Privacy Policy | Do Not Sell My Personal Information | Accessibility Statement
ThriftBooks® and the ThriftBooks® logo are registered trademarks of Thrift Books Global, LLC