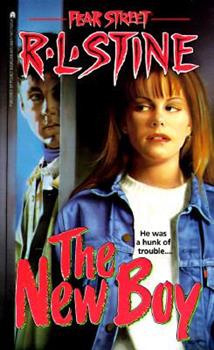 We receive 106 copies every 6 months.

What more could young adult readers ask of Fear Street? Beginning in January, the Fear Street publishing program expands to include a new title every month. The first of 1994 is The New Boy, about a mysterious and gorgeous new guy at Shadyside High. But the first girl to go out with him turns up dead. . . .

Published by Thriftbooks.com User , 16 years ago
Book: The New Boy Author: R.L Stine # of pages: Publisher: parachute press Inc. Ibsn: 0-671-73869-0 Price: $3.99 Have you read any of R.L Stines books before? Such as Baby Sitter Two, Lights Out, The New Girl, & The Step Sister and more? If you haven't you need to. I did it was called The New Boy it is a scary book about a couple of murders. The reason I picked this book is because it is so mysterious. Such as in different paragraphs it leaves you in suspense until the next paragraph ends. When I read this book I could picture the characters in my mind. Also I would not go out side of my house because I live near the woods so now you now that it takes place in the woods. Over all it was good because it is one of my favorite books. I love to read but mostly R.L Stine's books. Mostly girls would like it more than boys would because the main character is a girl. Even though a boy in my class named Lucas said "It was awesome". So boy's if you like scary, romantic books read this. Its rating is 5 stars.

Feast Your Eyes On This

Published by Thriftbooks.com User , 17 years ago
The New Boy by R.L.Stine is one of the best books I have ever read. I would definetly recomend this book to anyone who loves mystery books. This book is filled with thrills and suspense. The book starts of talking about a mysterious boy named Ross coming to ShadyHigh. But when he catches the eye of Jannie and her friends the soon try to go out with him. When Jannie hears about an incident that happened with Ross and his ex-girlfriend Jannie decides to do some investigating.

One of the best Fear Street books ever!!

Published by Thriftbooks.com User , 23 years ago
I think The New Boy was SO good. I never thought that the killer was... ( I don't want to blow the ending) I think Janie is really cool for going out with Ross even though her friends told her not to. I feel sorry for Ross always being stuck in the middle of everything. OVERALL THE BEST!!

Published by Thriftbooks.com User , 24 years ago
I absolutely love horror and R.L.Stine just brings it out to the reader! I have read every singl book he has to come out fo Fear Street and they are allgreat!
Copyright © 2020 Thriftbooks.com Terms of Use | Privacy Policy | Do Not Sell My Personal Information | Accessibility Statement
ThriftBooks® and the ThriftBooks® logo are registered trademarks of Thrift Books Global, LLC