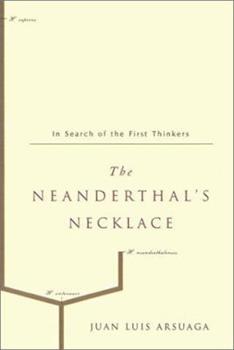 The Neanderthal's Necklace: In Search of the First Thinkers

A study of the proto-humans who lost the evolutionary battle with Cro-Magnon Man reveals insights into the nature of the human race and a look at the way Neanderthals lived and the reasons why they vanished.

Published by Thriftbooks.com User , 17 years ago
Arsuaga focuses on discoveries in his native Spain, and they are many. His hypothesis is that Neanderthals had the brains to be as intelligent as we, but lacked the physical equipment to develop sophisticated language. The author ranges afield into areas of natural history and biology that give the book a depth beyond its title. I'm reminded, in a very small way, of course, of The Golden Bough, which set out to explore one cultural artifact and wound up as an encyclopedia of cultural anthropology. I like Arsuaga's informal style and his fair-minded exposition of points of view that differ from his own. While the book is not a page-turner for the average reader, it is so for anyone seriously interested in its subject.

It is about who the first thinkers were...

Published by Thriftbooks.com User , 19 years ago
The book is very detailed and very interesting, but while it has lots of information about Neanderthals, and they are an important part of the book, much of it IS about the subtitle, In Search of the First Thinkers. When did we go from gestures to language? When did we stop making the same stone tool, again and again, and start making different tools for different needs? When did we stop thinking about how to hunt down an animal which was right in front of us and start planning out how to get food in the future? The author uses Neanderthals and Cro-Magnons to ask 'Why did one win over the other?' Was it language? What does art have to do with it? Maybe it had to do with the development of better tools? And what do bigger brains have to do with it if Neanderthals had the biggest ones?It is as much history as it is philosophy.

The Neanderthal as a nearly contemporary, parallel species

Published by Thriftbooks.com User , 19 years ago
This is a fine book that sheds further light on what the Neanderthals were like and what happened to them. Written in an engaging, clear and almost poetic style (the translation by Andy Klatt is first rate, his surprising use of "irregardless" on page 182 notwithstanding), this book gives us a sense of the latest understanding with an emphasis on evidence from the Sierra de Artapuerca excavation site in Spain where paleoanthropologist Professor Arsuaga is co-director. The black, white and gray illustrations by Juan Carlos Sastre nicely augment the text.Arsuaga begins with the observation that today we exist almost alone in the sense that there are no very similar species extant, the last one being the Neanderthal in Europe. Arsuaga then traces our descent until he arrives at "Domesticated Man" in the Epilogue. His detours and asides are very interesting. I was especially pleased to learn that there are well-preserved wooden lances (or spears) used by archaic humans fully 400,000 years ago. (p. 182-183) I also found interesting his digression on what caused the extinction of the megafauna of America some 10,000 years ago (in Chapter Six, "The Great Extinction").Primarily, though, this book is about the cultural, behavioral and conceptional abilities (as derived from the archaeological evidence) that separate humans from other living creatures, especially the Neanderthals. Arsuaga reveals his purpose on page 280: "I have been trying to summarize the evidence available concerning the thorniest problem of human evolution, the development of consciousness, which is the defining characteristic of humankind." He had asked in the Prologue on page ix, "Apart from us, has there ever been a life form on earth that was conscious of its own existence and of its place in the world?" In short his answer is yes, the Neanderthal, whom he defines as our contemporary, not as an archaic human species. (p. 278)Arsuaga's story begins about 2.5 million years ago when Homo habilis emerged in Africa (presumably from another post-australopithecine species) with a noticeably bigger brain than the first upright walking apes. "A short while later" (geologically-speaking) Homo ergaster (probably the same as Homo erectus) appeared. Arsuaga sees Homo ergaster as the first hominid to migrate out of Africa about 1.5 million years ago, spreading to Europe and southeast Asia. Not only did these proto-humans have a significantly larger brain than Homo habilis, they had also begun "to create a social and cultural environment...that afforded them ever more independence from the physical environment," which is one of the reasons they were able to survive in diverse climates, especially in the cold of the northern latitudes.Then about 300,000 years ago Arsuaga sees the development independently in Europe and Africa of a "second great expansion of the human brain" producing "somewhat different results." (p. 307) When modern humans again emerged out of Africa about 150,000 ye

A unique perspective on the evolution of consciousness

Published by Thriftbooks.com User , 19 years ago
The Neanderthal's Necklace: In Search of the First ThinkersIt's a rare book that delivers more than it promises, but Juan Luis Arsuaga's _The Neanderthal's Necklace_ does just that. The book jacket presents it as a story of the 10,000-year-long encounter between the Neanderthals and our own Cro-Magnon ancestors, a story that ends with the disappearance of the Neanderthals some 27,000 years ago. Arsuaga discusses that epochal culture clash at length and with many fresh insights. However, he weaves that narrative into a much grander story--his expert take on the evolution not just of the Neanderthals and our own very young species, but of all the other walking primates that preceded us back to whatever great-grandparent species we shared with organutangs, gorillas and chimpanzees some 6 million years ago. For good measure, Arsuaga throws in his original and highly readable takes on many key evolutionary issues, on the nature of consciousness, and--really the theme of the book--on when, where and how our own "hypersymbolic" human consciousness emerged.Arsuaga, a leading Spanish paleoanthropologist, has strong views on many topics. He's convinced that modern humans are unique. "Anatomically, we are but erect primates . . ." he argues. "At the same time, we humans are radically different from all other animals due to the astonishing phenomena of our intelligence, our capacity for reflection, and a broad self-consciousness of all aspects of our behavior." Accordingly, he denies consciousness, at least as he defines it, not only to non-human animals, but even to many of the upright, tool-using species that preceded us. " . . . animals lack both self-awareness and perceptive awareness, or consciousness. They are no more than biological machines." (Immediately after this hackle-raising statement, Arsuaga is perceptive enough to apologize "to all cat- and dog-lovers," whose beloved pets, he concedes, may possibly have "perceptive consciousness.")After in-depth discussions of almost every line of evidence, Arsuaga comes to several very interesting conclusions about the development of the fully human consciousness he so highly values. Surprisingly, he grants first membership in the consciousness club to a truly ancient ancestor, _Homo ergaster_, whose 1.8 million-year-old fossils have been found in modern-day Kenya. Not only did _H. ergaster_ have a body closer in size and shape to our own, but a brain that was a significant chunk larger than our first tool-using ancestor, _Homo habilis_. Unlike _habilis_, _ergaster_ fashioned biface stone tools--"chipped on two surfaces with obvious skill and concern for symmetry. "These primitive human beings were conscious of what they were doing, and they cared about the tools they carried in their hands," Arsuaga writes.Like most current researchers, Arsuaga is clear that Neanderthal's were not our direct ancestors, but a relatively recent, parallel, and ultimately extinct human branch. Still, he grants them a mental wo

Published by Thriftbooks.com User , 20 years ago
Juan Luis Arsuaga has written an informative account of his own research on the earliest Europeans as represented by the copious skeletal deposits in the Sierra de Atapuerca and in particular with respect to the remains discovered in one very special site of that region, Sima de los Huesos, the Pit of Bones. The study of hominid origins, in this case involving conspecifics of the genus Homo, is always an intriging field filled with a variety of opinions, reasoned and otherwise, and Professor Arsuaga gives a balanced treatment to the problem of the origin of the first Europeans and to the role that Neanderthals had in this evolutionary play. He is also not reluctant to state where his own sympathies lie with regard to our specific ancestry and the fact that, while, in his opinion, Neanderthals are not our direct ancestors, they do represent an alternative humanity, sentient, creative, and technologically proficient in their own right, and an alternative humanity that we shared the greater part of Europe with for some ten thousand years.I do have some minor concerns with regard to this book. First, American readers may be put off by Arsuaga's repeated use of researcher's full names when givng credit for the work of others. This is, I believe, a cultural artifact, but it makes the reading laborious in more than one instance. I wish also that more time had been spent addressing the significance of the skeletal remains of the child found in Portugal, dated to twenty-four to twenty-six thousand years ago, and purported to represent a combination of both Cro-Magnon and Neanderthal characteristics. Finally, the book subtitle suggests that the cognitive piece of the Neanderthal puzzle will be addressed at some length, and the discussion of this topic did not completely meet my expectations.Putting aside these criticisms, this book is thoughtfully written and gives even the novice reader ample background in demography, paleoecology, biogeography, evolutionary biology, and anthorpology so that both conceptually and empirically the aspects of archeology pertinent to Prof. Arsuaga's conclusions can be clearly understood. I recommend this book most strongly and suggest that the ideas shared here will provoke the reader to ponder just what life might have been like when two alternatives to the question, What does it mean to be human? existed side by side over no small period of time.
Trustpilot
Copyright © 2022 Thriftbooks.com Terms of Use | Privacy Policy | Do Not Sell My Personal Information | Cookie Preferences | Accessibility Statement
ThriftBooks® and the ThriftBooks® logo are registered trademarks of Thrift Books Global, LLC