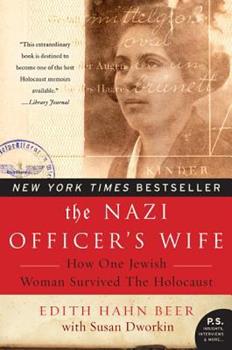 The Nazi Officer's Wife: How One Jewish Woman Survived the Holocaust

Edith Hahn was an outspoken young woman in Vienna when the Gestapo forced her into a ghetto and then into a slave labor camp. When she returned home months later, she knew she would become a hunted woman and went underground. With the help of a Christian friend, she emerged in Munich as Grete Denner. There she met Werner Vetter, a Nazi Party member who fell in love with her. Despite Edith's protests and even her eventual confession that she was Jewish,...

Published by Ted , 1 year ago
What was a U-boat? To most of us knowledgeable about World War 2 we think of a German submarine. However, there is a lesser known reference as a code name used by Jews who were living as non- Jews openly in Nazi society. This is the story of one such Jewish U-boat named Edith Hahn. Originally forced into slave labor on a farm, one day she received permission to take a train and used the opportunity to simply remove her yellow star. She then assumed the identity of Grete Denner. Soon she attracted the attention of a Nazi supervisor at the Arado aircraft plant, they fall in love, and eventually get married. Hence, the title of the book. She then finds herself a respected member of Nazi society - as long as no one discovers her true identity. The first half of the book describes her experiences as a Jew. While interesting, there is nothing really new or unique in her experiences. However, the second half of the book describes life as a Jewish U-boat and in that capacity it offers a unique and rare look into an aspect of World War 2 history not typically shared. This is a valuable addition to any World War 2 library.

Published by Kristin , 1 year ago
I dislike only giving 3 stars to this book because the content was heavy and so very important. I did find that the book seemed to be sporadic and not going into the detail (although heavy) when I wanted it to. There was a quote that truly resonated with me and in fact, made me frustrated that it still has meaning in today's society. "You see, I cultivated blindness...It was the wrong plant for this climate."

Published by Julia , 2 years ago
I love WWII books and this one was truly incredible. An amazing story of survival.

Published by Tiff , 3 years ago
Book is in great condition. Almost like new. Very happy with the item :)

Published by Thriftbooks.com User , 22 years ago
I'm an 18-year old college student in India.My father had been to London recently where he ran into Ms.Angela at Harrods.Although,it was a chance meeting for him,it was a god-sent gift for me.She encouraged him to read a copy of "The Nazi Officer's Wife" written by her mother,Edith Hahn Beer.Although I must admit that war novels never interested me before,I was proven wrong by this one.Once I started reading the book,I just couldnt put it down.Here is a simple,straightforward account of a Jewsih woman whose faith in her religion and her strength never let her down inspite of the horrendous perils that she had to face every minute of her life during the World War period.When I try to understand the pain in her heart when she was refused her University Degree,when she had to leave her Mother for the Asparagus fields,when she had nobody to turn to after her relationship with her boyfriend was heading no where,when she had to put on an endless charade amidst the core of the Nazi society,when she had to rely on God's mercy to keep her Jewish identity a secret,when she had to work as a maid in London after being an honoured Judge in Germany.....what can i say,its just unimaginable that this woman managed to survive through all this on her own.There are so many lessons that this book has taught me.I can never stop admiring Edith Hahn Beer for her unshakeable faith that tomorrow is a better day.One of the most beautiful things I found in this book was the French saying "Life is beautiful and it begins tomorrow".It is so true that very few of us bother to realise its meaning!And of course,how can I forget to mention how moved I was by this woman's love for her Mother.Her belief that she would be reunited someday with her Mother,her pangs of grief when "she sent me cake when she was hungry,mittens when she was cold"...and her resolution to do the same for her daughter(by trying to provide her the family which she herself never had around her)....these things go a long way in bringing out human emotions in their most tender and vulnerable forms.One cannot help but think inwardly what else one could have done under such terrible circumstances.No doubt Ms.Beer's decisions were justified in every sense and they were ably supported by her virtues which we should all aspire to inculcate.

Bringing The Horror of The Holocaust To A Personal Level

Published by Thriftbooks.com User , 22 years ago
We will only have the surviving victims of the holocaust with us a short time longer. How important it is that as many as possible should write their own personal stories. In the case of this book, Edith Hanh Beer allows us to see her very normal life at first disrupted and then torn apart by the invasion of the Nazi's. We see what motivates her (saving her mother's life, staying near the man she loves) and how both those decisions lead her into difficulties in one case and possibly into saving her own and her child's life in the other. We see the price one pays for concealing an identity so carefully that the concealer doesn't really know who she is anymore. We see how one can live with a mate and play a role for survival, and how those roles can turn around. It is an excellent and quick read, and I wish more of us would read these true stories to keep us from ever being in such a horrible situation ever again.

Published by Thriftbooks.com User , 22 years ago
I have just finished devouring Edith Hahn Beer's account and was completely entralled and with her story. It is a must read for anyone who in interested in the World War II Era and how we can not allow the world or anyone to let this happen again.

A stunning tale of survival

Published by Thriftbooks.com User , 22 years ago
I did not think I could read yet another WWII/Holocaust book and I was put off by the odious notion of a Jewish woman marrying a Nazi officer for cover. Forget all that. Let no one judge until he/she has read this book, a simple tale of day-to-day survival. Beautifully written. A page turner.
Trustpilot
Copyright © 2022 Thriftbooks.com Terms of Use | Privacy Policy | Do Not Sell or Share My Personal Information | Accessibility Statement
ThriftBooks® and the ThriftBooks® logo are registered trademarks of Thrift Books Global, LLC