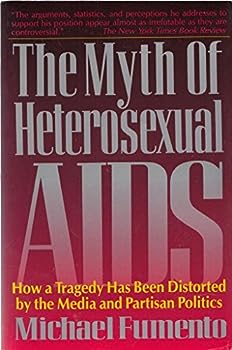 The Myth of Heterosexual AIDS: How a Tragedy Has Been Distorted by the Media and Partisan Politics

In the 1990 edition, Fumento predicted that the AIDS epidemic had peaked the year before, but the necessary epidemiological information was not yet compiled. He has updated statistics now to support his basic message: AIDS is not on the verge of wiping out civilization; it is a fatal viral disease that is running its course just like all viral dise

Published by Thriftbooks.com User , 13 years ago
Fumento, Gordon Stewart, and others who disputed that HIV would be a pandemic in the general heterosexual population have finally been vindicated. The independent published an article a few weeks ago about how the threat of a heterosexual epidemic is over. It is obvious that AIDS is far from the disaster that was forecast in the 1st world countries. It has confided itself to the so-called trash can of society - junkies,homosexuals,whores, and Johns. As far as Africa proving the heterosexual epidemic that is rubbish. "AIDS" in Africa is the relabeling of old diseases. Africans need nutritious food, clean drinking water, medications for endemic diseases, and other basics, not condoms and "partner reduction". I dare anyone to visit the disease ridden slums of Africa. Sex is the last thing on peoples minds there!

A Voice of Calm and Reason In An Age of Hysteria

Published by Thriftbooks.com User , 20 years ago
If you are a non-IV drug using heterosexual, this book is simply the single best resource on HIV and AIDS available to you. The author is the first Ive ever read who is able to accurately interpret the statistics involved. He is also able to take important scientific findings, such as the issues regarding "virul load" and make them understandable to the lay person. His arguments are cogent and well documented and, best of all, the past eight years have proven them correct, from both a scientific and epidemiological standpoint. Very very few books on this issue remain in print this long. There is a reason this one has. If you fear this disease, this is the book to help you determine how realistic (or not) your fear is.

Include this book in "Banned Books Week" promotions

Published by Thriftbooks.com User , 20 years ago
Good grief, look at the lame objections to Fumento's book. He never said heterosexuals *couldn't* get AIDS, just that they were nowhere near as likely to get it as the classic risk groups. Is there something wrong with acknowledging this?Is his message one of tolerance for heterosexual promiscuity? No. He points out that the places where it is widely associated with heterosexual sex are places where one or more of the following are true: 1) Heavy sanctions against homosexuality impel sufferers to deny their true activity; 2) Rampant promiscuity has led to rampant VD, causing lesions which encourage the blood-to-body-fluid contact needed for AIDS transmission and concentrating the disease in prostitutes; and 3) because of severe shortages, medical professionals reuse needles themselves, effectively giving their patients the AIDS transmission rates associated with intravenous drug abusers.In IL there was once a requirement for an AIDS test before issuing a marriage license, but after a while it was dropped because there were so many false positives on the test relative to the actual incidence in couples about to get married.In the paperback edition I saw, Fumento noted the efforts made by various individuals and groups to suppress his politically incorrect message. I know indirectly, because it took me a couple of years to get my copy of the book back in the early 90's. I didn't succeed until another publisher took it over.Thank you Mr. Fumento for sticking to your guns. The reviewers who gave this book fewer than three stars to date are just regurgitating a mindless left-wing catechism.

The truth outs, after thousands die to no purpose.

Published by Thriftbooks.com User , 21 years ago
In the early days of the epidemic, it was rational to worry that AIDS might 'explode through the general population.' Once the HIV virus was isolated, and a little known about how it spread, it became obvious that it just wasn't possible.Back in 1987, Michael Fumento wrote an article in Commentary which told why the general heterosexual population was not at signifigant risk for AIDS. He thought everyone would be glad to know that tens of millions of USAmericans would NOT die of an incurable disease associated with incredible suffering.Wrong.Lots of people wanted everyone at risk, or, at least, wanted everyone to believe that everyone was at risk, regardless of whether or not it was true. Fumento was denounced, harassed, and, lied about for stating that most AIDS victims would continue to be male homosexuals, IV drug users, women in a long term relationship with men in the first two groups, and children of women with HIV. The terrible thing is, that, by saying "Everyone is equally at risk," those at high risk didn't get the information they needed to protect themselves. Thousands died in the U.S. because they were deliberately misinformed about AIDS by those with political agendas to push -- agendas they weren't willing to argue for honestly.Thirteen years later, the story continues. Very few cases of AIDS are contracted heterosexually, except for the women sleeping regularly with bisexuals and drug users, and Fumento continues to be denounced. Even people whom came to agree with him, such as Gabriel Rotello, felt it necessary to say nasty things about him -- things that weren't true, by the way. And those whom WANT heterosexuals to be at high risk for AIDS continue to claim Fumento was wrong, as you can see by looking at some other reviews on this page. The one thing you won't see is facts to back up their assertions, for the simple reason that there are none. Read this book if you want a fascinating account of how the truth about a terrible disease was surpressed. And check out Fumento.com to find out the latest lies being spread about AIDS -- but only if you value the truth above political correctness.

Published by Thriftbooks.com User , 22 years ago
This is one of the most important books of the 1990s. It changed my life, and can change yours, too.AIDS has afflicted gay men and hemophiliacs in numbers which are wildly disproportionate compared to their total numbers in the population. To ignore the facts, and pretend that all people who engage in any kind of sexual activity are equally at risk, is to encourage those in high-risk groups to engage in more risky behavior, and is thereby doing them a great, great disservice which invariably costs many more lives.Before you buy into the PC hype, you would do well to consult the CDC's own data, which was a major information source for this book.AIDS is indeed a great tragedy, which is why it's so important that we be honest about it and ignore the PC hysteria.Michael Fumento had a thankless task in writing this book, for which he has mostly received scorn, and even lost his job at one point. Regardless, thank Whatever that something possessed him to write it, for we can all benefit from this courageous work.
Copyright © 2020 Thriftbooks.com Terms of Use | Privacy Policy | Do Not Sell My Personal Information | Accessibility Statement
ThriftBooks® and the ThriftBooks® logo are registered trademarks of Thrift Books Global, LLC