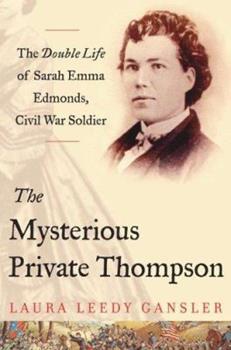 Resurrecting a lost hero of the Civil War, The Mysterious Private Thompson tells the remarkable story of Sarah Emma Edmonds (1841-98), who disguised herself as a man and defended her country at a time... This description may be from another edition of this product.

So good it should be made into a movie!!!

Published by Thriftbooks.com User , 16 years ago
"The Mysterious Private Thompson" is a first-rate, riveting book about a woman who ran away from home to avoid an arranged marriage and disguised herself as a man to make her way in the world. She first became a successful traveling book salesman and then, astoundingly, served as a Civil War soldier for two years. Not only is the story fascinating as to how someone could maintain a disguise so effectively for so long a period of time, but the story's historical context is so carefully researched and deftly conveyed that you are almost unaware that this is a history book as well as a human interest story. I learned more in this book about the Battles of Bull Run, the Peninsula Campaign, the Battle of Fredericksburg, plus Generals McClellan and Burnside, than I had in all my years of school. Laura Gansler is a brilliant, gifted writer and I highly recommend this book.
Trustpilot
Copyright © 2022 Thriftbooks.com Terms of Use | Privacy Policy | Do Not Sell My Personal Information | Accessibility Statement
ThriftBooks® and the ThriftBooks® logo are registered trademarks of Thrift Books Global, LLC