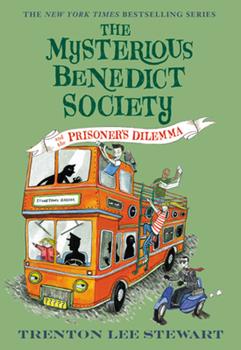 The Mysterious Benedict Society and the Prisoner's Dilemma

(Book #3 in the The Mysterious Benedict Society Series)

Join the Mysterious Benedict Society as Reynie, Kate, Sticky, and Constance embark on a daring new adventure that threatens to force them apart from their families, friends, and even each other. When an unexplained blackout engulfs Stonetown, the foursome must unravel clues relating to a nefarious new plot, while their search for answers brings them closer to danger than ever before. Filled with page-turning action and mind-bending brain teasers,...

Published by Thriftbooks.com User , 12 years ago
My 10 and 12 year-olds love this series and love this book! They have read them all a number of times and they can't seem to get enough of them! I really enjoyed them all, too! The characters are easy to relate to and the story is well thought out. When I asked my kids if they had any criticism to add about this book, they said "now way, it's awesome!" So, we wholeheartedly recommend it!

The Mysterious Benedict Society and the Prisoner's Dilemma

Published by Thriftbooks.com User , 12 years ago
The Mysterious Benedict Society and the Prisoner's Dilemma (and the two that precede it), are three of our family's favorite books! We couldn't wait to start the next book as we finished each. When we finally read this last installment, my son said, "It's a shame that we're done reading the best three books in the world!" We found the stories to be exciting and full of twists, the characters well written and we enjoyed each of their quirky personalities. In fact, we raved so much that my husband read them when we finished, and he enjoyed each just as much. If more people knew about Reynie, Sticky, Constance and Kate, my kid's Halloween costumes would make more sense! I wish Trenton Lee Steward had more children's books like these. We would highly recommend these books to anyone, young or old, that enjoys a good read! A word of warning (does not spoil): A few times during the series one of the main characters has nightmares about the "Old Hag" and I thought that would suggest things to my kids that had never occurred to them, things like thinking they are going to have nightmares. Thankfully, this is only mentioned very minimally and isn't an integral part of the story so it was easily skipped while reading aloud to my children. That aside, They're great! Read them!

"Kate Had Finally Figured Out a Good Rhyme for Constance"

Published by Thriftbooks.com User , 12 years ago
If you're a fan of the series, that alone should persuade you pick up a copy of this book, eh? Well, if that's not enough, than on with my real review... "The Mysterious Benedict Society and the Prisoner's Dilemma" begins with Reynard "Reynie" Muldoon, George "Sticky" Washington, Kate Wetherall and Constance Contraire reunited once again. Yet, as with the beginning of the previous installment ("The Mysterious Benedict Society and the Perilous Journey,") all is not entirely well. The children are prisoners of a sort. Not that they are in prison, but they and their families have been uprooted from their normal homes and, for protection, are being housed by Mr. Benedict, as it has been deemed necessary to keep them under ground due to the continued schemes of the evil Mr. Curtain. The beginning of the story sees the group being tested with a classic conundrum known as the "Prisoner's Dilemma." I was familiar with the concept going in through the show "Numb3rs," but for those that don't know, Sticky provides an excellent explanation of it in the book-- two prisoners, partners in crime, are arrested, but the police do not have needed evidence against them, so they try to get them to talk. If one talks and the other doesn't, the one that talks goes free, while the other receives a harsh sentence. They can choose to both remain silent, in which both receive a very light sentence. Or if they both betray the other, they both receive a middle of the road sentence. If you're familiar with this series, you may have guessed that the monkey wrench in the works here is Constance, but that the Mysterious Benedict Society comes through in the end. With events taking place in Stonetown with everyone together, the supporting cast of the series is explored in greater depth than ever before. Also to be found in this book are answers to long-awaited questions regarding a couple of the key mysteries of the series. The book begins with a growing tension until, about halfway through, the other shoe drops and The Mysterious Benedict Society faces their greatest test yet. The group will have to rely on their combined talents and friends, as well a most intriguing new power of Constance's that is almost supernatural. So many plot threads are seemingly resolved in this book that it feels very much like this book is intended as a finale to the series. If this is the case, then I am pleased to see the series ending in fine form. If I am, in fact, mistaken, then I will be delighted to discover so. At 391 pages, "The Mysterious Benedict Society and the Prisoner's Dilemma" is actually a fair bit shorter than either of the books that preceded it. Despite this, the novel sizzles with the sharp wit and growing tension of the previous "Mysterious Benedict Society" stories, leading towards a most satisfying conclusion. Don't miss the bus! Read "The Mysterious Benedict Society and the Priosoner's Dilemma" to discover what's in store for this group of talented children.

Published by Thriftbooks.com User , 12 years ago
I love this entire series! They are my favorite books. I love solving the mysteries and the characters are fun! I've read # 1 29 times, # 2 19 times and #3 only 1 time. I'm in the 6th grade.
Trustpilot
Copyright © 2022 Thriftbooks.com Terms of Use | Privacy Policy | Do Not Sell or Share My Personal Information | Accessibility Statement
ThriftBooks® and the ThriftBooks® logo are registered trademarks of Thrift Books Global, LLC