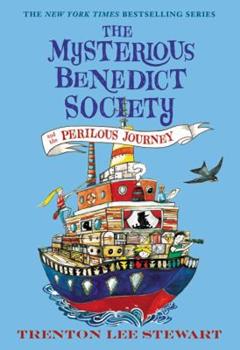 The Mysterious Benedict Society and the Perilous Journey

(Book #2 in the The Mysterious Benedict Society Series)

The fearsome foursome is back in the second installment of the New York Times bestselling series praised by Rick Riordan The Mysterious Benedict Society is up against a new mission, significantly closer to home. After reuniting for a celebratory scavenger hunt, Reynie, Kate, Sticky, and Constance are forced to go on an unexpected search--a search to find Mr. Benedict. It seems that while he was preparing the kids' adventure, he stepped right into...

Came as paper back when I ordered hardcover

Published by Charlotte Kim , 5 months ago
I ordered 2 of the books in this series both we’re supposed to be hardcover in very good condition and this one was more expensive, i got a paperback edition in my package instead and the other didn’t have a dust jacket.

Even Better Than Its Predecessor

Published by Thriftbooks.com User , 12 years ago
In the second book of "The Mysterious Benedict Society" series, Stewart has given his four remarkably clever orphans families. However, this does not mean the adventure is over for Reynie, Sticky, Constance, and Kate. In an effort to keep the children challenged and connected, Nicholas Benedict arranges for them to embark on a new quest that unfortunately goes awry at the hands of the evil Mr. Curtain. This forces the children to work together like never before as they race against the clock to save their friends and quite possibly, the world. In this novel, Stewart provides a plot that builds upon, and in some ways outstrips, its predecessor. While still a children's book, there seems to be a little more maturity and a little less predictability here, resulting in a strong piece of writing overall. Most interesting to me was the character development, especially of the four children. They are a little older and a little wiser, which allows us to probe their hearts and minds further than before - especially the two girls. The themes of good v. evil, the choices we make, friendship etc. that are so popular in children's literature become something very personal to each of the children and give this novel a new dimension. These books truly are wonderful and I am looking forward to the publication of a third.

Book Report by a 7th grader

Published by Thriftbooks.com User , 12 years ago
The Mysterious Benedict Society and the Perilous Journey by Trenton Lee Stewart "*****" I give this book 5 asterisks out of 5! This book has engaging characters, imaginative settings, and an exciting plot. As the story evolves,the characters grow and change. Also, the plot has many, often unexpected, twists and turns, but not so many that the reader feels lost. This book is a sequel to "The Mysterious Benedict Society". The reader will not be lost if he/she had not read the first book, as this book has a new conflict. The only thing the reader will lose is a small amount of character development. My favorite part of the book is the climax when the villain, Mr. Curtain, tricks the four unsuspecting protagonists into a trap-you will have to read the book for the details. The book is 440 pages so a lengthy read but definitely worth your time. I would recommend this book to good readers between the ages of 9-14 who want a book with adventure but without sacrificing a strong message or characterization. Fans of the Alex Rider series might also enjoy this book. In The Perilous Journey, the setting is the least important of the three narrative elements because, as the title suggests, it is a journey story. The most important of the many settings is the uninhabited, rocky island on which the climax takes place. Since it is not named in the book I will simply refer to it as "the island". The island is described with great detail multiple times, "a very large oblong land mass in the middle of a watery nowhere." and "that isolated, wind-blasted place." are just two examples of this desolate place. The largest effect of the setting is the feeling of isolation that it lends to the later part of the book, which subsequently affects the character's actions. For example, when they needed to escape the island, they had to bring in a boat and had nowhere to run until it arrived. Also, they could not bring in any help from the police because of the island's remote location close to Great Britain, in the cold northern Atlantic This book contains a lot of direct and indirect characterization and the characters are continuously changing. The four main characters are Constance, a whiny, sleepy, uber smart three year old girl, who towards the end of the story has premonitions. Reynie is the most normal of the kids, although he has a heightened sense of logic. Sticky is unsure and shy and has an incredible memory. Kate is an ex-circus performer and an amazing athlete and an optimist. All four of them must use their gifts to solve the puzzles laid out for them by Mr. Benedict to help find him when he was kidnapped. During the story the characters all change and evolve as different situations confront them. Kate becomes more concerned when she worries about her father. Sticky realizes what he is capable of and gets braver. Reynie questions his own judge of character and Constance becomes more mature. These character's development make them dyna

Read it in one day!

Published by Thriftbooks.com User , 13 years ago
My son, 9, read this book in less than 24 hours AND he slept all night! (I know because I swiped the book from his bedside table so I could read while he slept.) Great sequel to MBS. Didn't think it could be matched! Makes kids the heros- no grown-up can do what the kids can as a team. Good read-aloud for younger readers.

Reading this book is not a Perilous Decision!

Published by Thriftbooks.com User , 13 years ago
For lovers of the first Mysterious Benedict Society novel, here comes another installment of mystery, puzzles and teamwork for your enjoyment. I love the way Trenton Lee Stewart mentions things that others would leave out, like the varying strengths of children. Reynie is so good at interpreting other's most secret emotions, all by using his common sense and by watching facial expressions, and I've never read about that in a book before. In pointing out subtle strengths of the children, Trenton Lee Stewart makes sure Reynie, Sticky, Kate and Constance are all close to our hearts. Their ability to work together (and sometimes even the way they bicker) is so fun to read about and so realistic. In this book, The Mysterious Benedict Society is about to have their one year reunion, and a party to celebrate at Mr. Benedict's house. But, upon their arrival, they discover that a sort of ransom note (sent by homing pigeon) has foiled their plans. Mr. Benedict and Number Two, his right hand woman, have been kidnapped! The children, always thoughtful and responsible, waver on whether they should disobey their loved ones to go on this "perilous journey," but alas, they must save their namesake, and go. On this journey, they encounter many puzzles, clues, and mysteries just as intriguing and fun as the first book. I'm so glad to have read another installment of the Mysterious Benedict Society, and I hope they keep coming!

"Children You Must Not Come STOP. Dangerous"

Published by Thriftbooks.com User , 13 years ago
The Mysterious Benedict Society, a group of four children created to thwart the plans of the evil genius Ledroptha Curtain, is fresh off their great victory. The "brainswept" are slowly having their memories returned and everything seems like it should be getting back to normal. It should be the perfect happy ending, yet happy endings are rarely so simple... All is not well for the Mysterious Benedict Society. Reynie, still shaken by the previous adventures, finds himself having nightmares of being surrounded by snakes. A conversation with Mr. Benedict did little to ease his growing fears that wickedness is something to be generally expected of people. Kate has been living largely on her own wits for the past six months (Milligan largely off doing secret agent work) and Sticky has had trouble convincing his parents that he should be allowed to go to college. As for three-year-old Constance, she continues to struggle with being a young child genius, while the government refuses to even properly acknowledge her existence so she can be adopted by Mr. Benedict. The group comes together again with the promise of experiencing a great surprise created by Mr. Benedict, but then learns something horrifying. Both Benedict and Number Two have captured by Curtain and his minions -- now going by the name "the Ten Man" -- for the ten different ways they have of torturing people. The only solution may be to follow through with Mr. Benedict's surprise -- an adventure he planned for them that may now be their only way to save him. So, once again, danger and thrills are promised, but also a great read and satisyfing adventure. The book jacket states that the author, Trenton Lee Stewart, is a graduate of the Iowa Writer's Workshop. If his works are any indication, then they may just have something special there. The jacket also offers a review comparing the style to that of Lemony Snicket -- but I never could quite bring myself to fully enjoy Snicket's mode of writing. This book, however, has been the most anticipated for me since "Harry Potter and the Deathly Hallows" and I'm delighted to say that it satisfies. Pick up a copy for yourself and find out what adventures are in store for this intrepid quartet.
Copyright © 2020 Thriftbooks.com Terms of Use | Privacy Policy | Do Not Sell My Personal Information | Accessibility Statement
ThriftBooks® and the ThriftBooks® logo are registered trademarks of Thrift Books Global, LLC