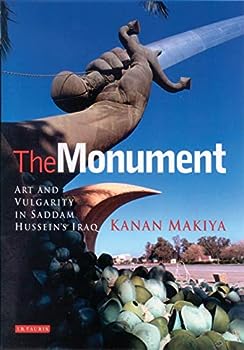 The Monument: Art and Vulgarity in Saddam Hussein's Iraq

In Baghdad, an enormous monument nearly twice the size of the Arc de Triomphe towers over the city. Two huge forearms emerge from the ground, clutching two swords that clash overhead. Those arms are... This description may be from another edition of this product.

A remarkable book on an amazing subject

Published by Thriftbooks.com User , 14 years ago
I got a copy of this book following the First Gulf War and became fascinated with the subject of the Arch and other Ba'athist monuments, especially in the context presented by the author. The story of how the monument was built, its symbolism etc. is an eye-opener into the fascist regime that the Coalition very nicely did away with in 2003. When I was assigned to Baghdad in 2005 I was determined to visit the Arch, which I did on one of my trips to the Green Zone. It is still quite impressive, as is the nearby Tomb of the Unknown Soldier. One of the guards insisted on showing me where the coffin of the Unknown Soldier is in the above-ground modern sculpture there. Alas, the museum inside the monument was unlocked but the display cases were empty. I am told that the new Iraqi government has placed an honor guard at the monument since I left Baghdad. Don't get the impression this book is a kind of tour guide... it isn't. But once you get past the "What is art" stuff the book becomes a very interesting study and does contain all sorts of information that I found interesting. For instance, if not for this book I would not have recognized the unfinished "World's Biggest Mosque" when I flew past it.

The Monument : Art and Vulgarity in Saddam Hussein's Iraq

Published by Thriftbooks.com User , 16 years ago
In 1958, Baghdad had just three public sculptures. During the revolution, mobs destroyed one of King Faisal and another commemorating Stanley Maude, the British general who routed Ottoman forces in Iraq, leaving just one dedicated to an obscure prime minister. But, after thirty-five years of Baathist dictatorship, Baghdad is littered with monuments, most a legacy of Saddam's rule. In this reprint of a 1991 work, Makiya analyzes the politics of art and architecture under Saddam Hussein. The son of one of Iraq's leading architects, Makiya is himself trained as an architect although he is better known for such seminal works as Republic of Fear[2] and Cruelty and Silence.[3] Makiya explores how, with increasing megalomania, Saddam sought to tie himself to legendary Islamic figures. He depicted himself on a white horse, drawing a clear parallel to Hussein, one of Shi`ite Islam's most revered figures. Saddam-always sensitive to whispers that his mother was a prostitute-published a family tree showing direct descent to `Ali, the fourth caliph and the patron saint of Shi`ism. During the years of the Iran-Iraq war, Saddam tied himself to Sa'ad ibn Abi Waqas, an early Arab warrior who brought Islam to Iran. Makiya dedicates a chapter to kitsch, examining everything from ordinary wall portraits to wristwatches, and the complicity of artists. Makiya examines how "an entire generation of Iraqi intellectuals collaborated with the Ba'thist regime in Iraq." The bulk of Makiya's analysis regards Baathist monuments. Because Saddam Hussein micromanaged monument development, their structure provides a window into his mind and reflect his totalitarianism. Take the Victory Arch: higher than the Arc de Triomphe in Paris, this monument consists of forearms and fists holding crossed swords. The architects worked the arms from plaster casts of Saddam's own. They forged the swords from the steel of melted weapons of Iraqi soldiers killed on the battlefield with Iran. Five thousand Iranian helmets gathered off the battlefield complete the monument. Chillingly, Saddam's monuments often foreshadowed the future rather than just commemorated the past. He initiated construction on the Martyr's Monument just seven months into the Iran-Iraq war, before there were many "martyrs" to glorify. He ordered work on the Victory Arch three years and tens of thousands of deaths before the end of the Iran-Iraq war. Examination of Baathist art raises larger questions. How did an entire generation of Iraqi intellectuals come to collaborate with the Baathist regime? Makiya suggests that Saddam's monuments symbolize "a wholesale breakdown in the ability to judge right from wrong." While many policymakers know about Saddam on the world stage, The Monument provides an important key in trying to decipher Saddam's deeper imprint on Iraqi society. Middle East Quarterly, Fall 2004
Trustpilot
Copyright © 2022 Thriftbooks.com Terms of Use | Privacy Policy | Do Not Sell or Share My Personal Information | Accessibility Statement
ThriftBooks® and the ThriftBooks® logo are registered trademarks of Thrift Books Global, LLC