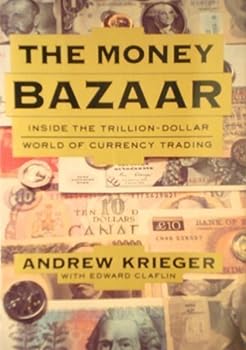 The Money Bazaar : Inside the Trillion-Dollar World of Currency Trading

by Andrew Kreiger and Andrew Krieger

A top currency trader introduces the circle of elite global business moguls who control and manipulate the values of world currencies and, consequently, the worth of every country's goods and... This description may be from another edition of this product.

Only the Technology used is dated

Published by Thriftbooks.com User , 13 years ago
The reviewers are right, the book is dated.... BUT ONLY THE TECHNOLOGY THAT KRIEGER USED. The art of trading, the meat and bones of it, will NEVER BE DATED. That is why with basically just a telephone I bet Krieger could trade rings around all of us. So stop looking at the date of publication and look at the information published in this book. This guy made a lot of money because he kept long hours and worked hard, and this book can help us novice traders understand that.

Boom or Bust an indepth look at how the FX works.

Published by Thriftbooks.com User , 16 years ago
About the time of the Gulf War, International Markets had been hoping the U.S financial house would put their house in order. International Markets wanted more investing, savings and growth; instead, U.S markets became heavy in consumer debt. Interest, taxes, and inflation were at high levels. Foreign investment began seized up large chunks of real estate hoping for inflation too drive up price and increase their U.S equities. The 80s housing boom would be curtailed by rising interest rates but maintain a stead climb for the next 25 years. Real Estate would seem invincible until maximum debt levels could not be exceeded. Corporate Investment enticed foreign investors to buy U.S companies based on location value and settling for lower levels of production. However, the corporation investors would not be expected to maintain this pattern. Investor would buy U.S companies and transfer labor forces overseas taking advantage of lower labor costs and high profit margins. Deflation. What would happen, if the housing prices deflate? Cheap money would be repaid by expensive money and for this reason, it may be better to cut loses, and move the money into a foreign currency. Perhaps, the Germany currency would be the refuge to preserve value. Investors will be looking for currencies in countries where economic growth is high, inflation low, and real interest rates are high. Investors always have a safe habor to retreat too. Once the Foreign exchange starts moving in a particular way, it is unlikely to reverse, just like big ships turn slowly. The shifting of money between countries is linked to economic performance. In 1984, the dollar reached new highs, many consider it overvalued, some were watching for a sell-off. Reagan stated, he would not intervene. The decline of the dollar was agreed upon in "The Plaza agreement", as follows, "further orderly appreciation of the main non-dollar currencies against the dollar is desireable." Between 1985-87 the dollar fell 50% meaning the buying power of the U.S citizen was cut in half. Capital flows. There is only one hugh pot of international money. Capital flows shift assets from one country to another and these shifts affect the currency value or the exchange rate. Foreign exchange is needed for liquidity. Individual trader make and lose money from Foreign exchange transactions, however, corporations use the foreign exchange for liquidity. Corporations may be required to make purchases in dollars, so they exchange local currency for dollars. Hedging allows the company to lock a certain exchange rate in the future for a fix amount of money. Banks offer these credit rate forwards to clients. Banks actively try to bet they can beat the averages extended for the credit forward rate. Banks do this by buying and selling currencies on the foreign exchange and profiting off a marginal spread. In 1991, the U.S recession was ending, Europe economy was slowing down, the dollar was sha

Published by Thriftbooks.com User , 19 years ago
This is a great book. Mr.Krieger gives you the history of how foreign currency trading came about. He also provides you insight into how curreny trading work and more importantly how it fails.He doesn't give specific strategies on how to trade currencies, but he does introduce vocabulary and resources to help you get started. In that respect the book is out of date. There is no discussion on the internet and how that has changed the face of currency trading forever.This is a good book, a foreign exchange classic that wouldn't hurt any currency trader if he kept a copy on his shelf.
Trustpilot
Copyright © 2022 Thriftbooks.com Terms of Use | Privacy Policy | Do Not Sell My Personal Information | Accessibility Statement
ThriftBooks® and the ThriftBooks® logo are registered trademarks of Thrift Books Global, LLC