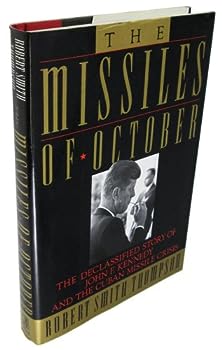 The Missiles of October: The Declassified Story of John F. Kennedy and the Cuban Missile Crisis

Based on recently declassified documents, a dramatic new look at the Cuban missile crisis and the nature of Kennedy's victory over Khrushchev, to be published on the 30th anniversary of the confrontation. 16 pages of black-and-white photos.

The Missiles of October Review

Published by Thriftbooks.com User , 18 years ago
?In Robert Smith Thompson's recounting of the Cuban Missile Crisis, The Missiles of October, thewhole story of the tense standoff between the United States, Russia, and Cuba unfolds into asuspenseful, detailed, yet sometimes confusing story. Although reading the book's jacket cover,or having some knowledge of world history, lets the reader know how the story ends, TheMissiles of October still reads more like a suspense novel than a non-fiction history book. Thompson leaves no details out, and makes sure that readers are well informed of all the eventsthat led up to the Cuban Missile Crisis. The book starts in 1945, as the United States is droppingthe atomic bomb on Japan, and ends on November 22, 1963, the day JFK is assassinated. Thematerial in between covers the missile crisis in its entirety, and brings new details to light that thepublic was not aware of. While The Missiles of October is chock-full of information, it sometimes feels as if toomuch of it is given. For instance, on page 344, Thompson writes, "On Sunday afternoon,television viewers watched their beloved Washington Redskins up in Yankee Stadium, receiving a49 to 34 shellacking at the hands of the New York Giants." Information like this is litteredthroughout the book, but it does not really enhance the story, or the reading experience. Furthermore, at some points, so much information is given that it is not only an annoyance, butalso confusing for the reader. Another problem is that Thompson alludes semi-frequently to the"TFX Scandal" only to touch on it briefly at the end of the book. Despite these shortcomings,though, The Missiles of October is a very enjoyable, well researched piece of work. What will probably strike any reader of this book the most is how close the United Statescame to an all out invasion of Cuba, and possibly a nuclear war. Thompson knows this, andfocuses much of the book on that topic. He even contends that the U.S. was within hours oflaunching a strike at Cuba at one point. Thompson also shows that President Kennedy's rejectionof advice from many of his trusted advisors is what kept a war from erupting. Thompson is alsoaware that many readers may not know some of the history that led up to the Cuban MissileCrisis, and he goes out of his way to let readers know what happened. When the book ends, readers will have to seriously reconsider what they thought theyknew about the Cuban Missile Crisis. Thompson's writing and overall accounting of the crisisleads the reader to believe that no one really won the tense standoff; both sides had to makeconcessions. The people that Thompson writes about also provide a interesting list of characters,some of whom may have had a motive in the assassination of JFK. Overall, The Missiles ofOctober is a good read for anyone with patience and a yearning for a suspenseful, amazing, andtruthful tale of American History.

The Best book in the world

Published by Thriftbooks.com User , 20 years ago
This book is so good because it is very action packed and has good facts
Copyright © 2020 Thriftbooks.com Terms of Use | Privacy Policy | Do Not Sell My Personal Information | Accessibility Statement
ThriftBooks® and the ThriftBooks® logo are registered trademarks of Thrift Books Global, LLC