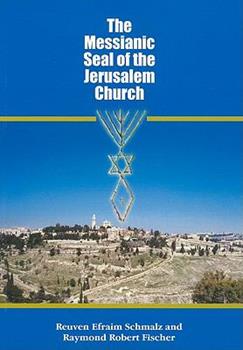 The Messianic Seal of the Jerusalem Church

The Messianic Seal of the Jerusalem Church, by Dr. Raymond Robert Fischer and R. E. Schmalz - First book on this important find - the symbol that many feel was the "logo" of the first Messianic... This description may be from another edition of this product.

A very relevant and astounding book.

Published by Thriftbooks.com User , 16 years ago
I have many books, which I consider valuable, some of which are worth many hundreds of dollars. However, this book is one of the most relevant and most important in my entire library. It is a must-read for all.

Published by Thriftbooks.com User , 22 years ago
I found this book fascinating with an historical insight I didn't learn in seminary. The first Christian Church was Jewish, connected to Mount Zion where the Upper Room had been built over King David's tomb, and the first Christians used a symbol that combined the Menorah, Star of David, and Fish into one pattern. Within a few centuries, this symbol was reduced to just the Fish in the wake of Rome's purging of all Jewish characteristics out of Christianity. The book contains pictures of archeological strikes of the symbol that have been found - findings that have been suppressed by both Jewish Orthodox and Roman Catholic leaders. The first part of the book traces the backdrop and development of the Essene community, its Messianic connection with the House of David, and the elimination of its influence by the time of the Council of Nicea in 325 A.D. The second half of the book shows the significance of each part of the triune symbol and its meaning for Jews and Christians today. If the foundation of Christianity is Messianic Judaism, this book is central to an understanding of the Church's identity and future and rightly calls for a reconciliation of Jew and Gentile believers.

Published by Thriftbooks.com User , 22 years ago
The Messianic Seal is an important archeological discovery, and this book is an excellent resource. Part one gives a brief history of the Essene sect with whom the Seal orignated, and part two expounds on the signifigance that this discovery has to the Church and the world today. This is the definitive work regarding the Messianic Seal.
Copyright © 2022 Thriftbooks.com Terms of Use | Privacy Policy | Do Not Sell My Personal Information | Accessibility Statement
ThriftBooks® and the ThriftBooks® logo are registered trademarks of Thrift Books Global, LLC