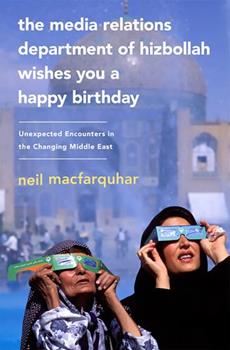 The Media Relations Department of Hizbollah Wishes You a Happy Birthday: Unexpected Encounters in the Changing Middle East

Since his boyhood in Qadhafi 's Libya, and later as a reporter for more than thirteen years in cities stretching from Tehran to Marrakesh, Neil MacFarquhar has developed a counterintuitive sense that the Middle East, despite all the bloodshed in its contemporary history, is a place of warmth, humanity, and generous eccentricity. In The Media Relations Department of Hizbollah Wishes You a Happy Birthday MacFarquhar shares a lesser known side of the...

A Fascinating, Funny and Hopeful Panorama of the Contemporary Middle East

Published by Thriftbooks.com User , 12 years ago
In "The Media Relations Department of Hizbollah...," Neil MacFarquhar has written an engaging, funny, and moving account of the present-day Middle East. What most distinguishes this book from others on the subject is Mr. MacFarquhar's ability to take us into the homes of the citizens that often seem to be obscured behind the great bulk of the state, or in the shadow of the extremists. He takes us behind the sometimes-clinical language of news reports and begins to unpack the complex experiences of people around the region with a frank but deeply human tone. The author artfully renders the nature of the citizens' struggle in Saudi Arabia, Jordan, Egypt, and Syria, and, quite refreshingly, doesn't rely on the vocabulary of violence that has lately plagued most books on the region. For the lay reader, Mr. MacFarquhar unwinds the tangled threads of Middle Eastern politics. He explains the origins of the Muslim Brotherhood, puzzles over the information he receives in his many meetings with state officials, and travels through the streets of a divided Beirut. He makes visceral the experiences of human rights activists, web-savvy techies who are changing the nature of the political and social conversation in their countries, and poets and writers who use their words to enlighten and serve their fellow citizens and to push back against their oppressive regimes. In the end, the author's greatest accomplishment is revealing to readers the beating human hearts of his subjects. He explodes otherness in an effort to achieve a more real understanding. I originally checked this book out from the library, but after reading it, I went out and bought it in hardcover as an investment. I know that I will return to it many times, and will lend it to friends eager for a keen-eyed assessment of the Middle East.

Best book on the Middle East I have read

Published by Thriftbooks.com User , 12 years ago
I am an American and have travelled extensively in the Middle East since 2006. I must say that The Media Relations Department book is the most illuminating treatment of what is happening and not happening in the Middle East that I have ever read. Neil's travels take him from Morocco to Iran. Along the way, he finds the potential change agents in the different countries - those who resist governmental oppression and continue to speak out for needed changes in societies burdened by autocratic regimes. Neil interviews these heroes for human dignity and allows the reader to understand the human dimension of the current dramas in Middle Eastern countries. Neil's explanations about the 1967 Israeli victory in the Six-Day War as being the start of Muslim fundamentalism's rise throughout the Middle East is very useful for understanding how things moved to where they are now in most Middle Eastern countries. Neil's explanation of how the mukhabarat - the security services - in Middle Eastern countries have taken on unprecedented power in each country for defending the status quo is extremely valuable. Neil provides numerous encounters with these security services. As a result, I now feel that I have gained an awareness for a dimension of life in Middle Eastern countries that I did not have when I was a tourist or occasional sojourner in the Middle East. I now better appreciate what citizens of Middle Eastern countries must think about on an ongoing basis - whether one's actions or words will prompt an "invitation" to come speak with the mukhabarat. The book moves fast and includes humorous episodes (in the midst of daunting circumstances). I would recommend this book highly to those who are just beginning a relationship with the Middle East, those that want to know if there is hope for the Middle East, and those who have years of direct experience with the Middle East. The scope of Neil's coverage would help any veteran of the Middle East know about what is happening across the thousands of miles of this region.

Published by Thriftbooks.com User , 13 years ago
This book is really good for those who want a more unbiased & in depth view into the Middle East & North Africa. The author's experience in the region is quite evident in this tome. In the USA we have been conditioned to demonize the Middle East & characterize the region as turbulent & troublesome. The author is able to dispel those erroneous ideas and put a more human face on many of the valiant & brave souls in the region who do yearn for a more open, democratic government & way of life. Neil's experience as a newspaper reporter is evident in the way the book is written. It is clear & well constructed, not obtuse or text book dull. Great read!

Published by Thriftbooks.com User , 13 years ago
Neil MacFarquhar has done something very rare here: he has given us a fresh view on the Middle East that is at once entertaining, based on long personal experience AND well-researched. That a book with "Hizbollah" in the title can make you laugh is an achievement in itself--but this book will make you reassess your views on what is going on in this key part of the world without making you feel that you are being beaten up or forced to take "sides" in a war that never ends. Rather, your eyes will be opened as to how the world is viewed from the Middle East. The excellent reviews the book has received will tell you about the wonderful character sketches he draws from across the region. What I can tell you is that this is the book I am buying to give to my friends. After Obama's speech in Cairo, reading this book is a must...and a treat.

Published by Thriftbooks.com User , 13 years ago
Neil MacFarquhar has gone where few Americans have dared to go--to the Arab and Islamic Middle East with an open mind. Maybe it's because he grew up in Libya, the son of an American oil engineer. Maybe it's because, as the New York Times Middle East Correspondent for many years, he's professionally wired for objectivity. Maybe it's because he's just a damn good storyteller, with a keen eye for detail and nuance. Whatever, MacFarquhar has written a witty and incisive survey of life in the contemporary Middle East, with deep dives into the worlds of Kuwaiti sex therapists, Lebanese hashish farmers, survivors of Moroccan political prisons and much more. He doesn't ignore the angry radicalism, the omnipresent secret police, the draconian limits on speech and assembly he finds. In fact he describes despicable acts in grim detail, unsparing in his condemnation. But what makes this book so important is that MacFarquhar manages to uncover a wide subculture of committed reformers from Cairo to Tehran. He leaves readers with a convincing case--foreshadowing Pres. Obama's inauguration speech--that the U.S. must hold out an open hand of support for all those struggling for decency in this all-too-often indecent part of the world.
Trustpilot
Copyright © 2022 Thriftbooks.com Terms of Use | Privacy Policy | Do Not Sell My Personal Information | Accessibility Statement
ThriftBooks® and the ThriftBooks® logo are registered trademarks of Thrift Books Global, LLC