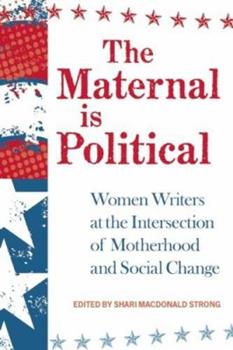 The Maternal Is Political: Women Writers at the Intersection of Motherhood and Social Change

Exploring the vital connection between motherhood and social change, The Maternal Is Political features more than 40 powerful, hard-hitting literary essays by women who are striving to make the world a better place for children and families--both their own and other women's--in this country and globally. From the mom deconstructing playground "power games" with her first-grade child, to the mother who speaks out against misogyny during an awkward...

Published by Thriftbooks.com User , 13 years ago
This is a smart, hopeful and soulful offering by the brilliant Shari MacDonald Strong ( & Co.). After reading three-quarters of the book in one afternoon, I found myself engaged in a conversation with my roommate who informed me that the cosmetics industry is worth billions of dollars per year...to which I replied that indeed, women are economic power-houses; we've just been distracted too long by the inane when we could be out getting political and changing the world. This book made me want to get off my duff and make the world a better place for our children. Send this book to every mother you know...our kids are counting on it.

An ideal piece for discussion among feminists and other politically oriented groups.

Published by Thriftbooks.com User , 13 years ago
This anthology offers great writing, cover to cover. It's all here--gender politics, sexual politics, school politics, adoption politics, religious politics, body politics, community politics, family politics, social politics--but with a mix of tone and approach that makes the book a real pleasure to read. Rather than weighing you down with the utter importance of it all, these essayists--who range from politicians (Nancy Pelosi, Benazir Bhutto), activists (Cindy Sheehan, Rebecca Walker), and other terrific writers, both known and less well-known-- make you want to think critically, get up off the couch, make a phone call, sign a petition. Do good in the world, and teach your children how to do good, also. And that part's not so hard, really. These essays remind us that our children are our constant witnesses; we should take subtle advantage of that while they are still at home, and also teach other's children when they're in our company. Share this with the mothers you know, and their partners, friends, and children, and remind them: it's time to get political.

Published by Thriftbooks.com User , 13 years ago
In this collection, Shari MacDonald Strong and well-known contributors such as Nancy Pelosi, Benazir Bhutto, Barbara Kingsolver, and Anne Lamott remind us that the most basic things in our lives - food, clothing, shelter - are a matter of political concern. These essays are lively and well-written and cover a variety of issues that are of interest to mothers, and that should be of interest to all. In some of my favorite essays, Jennifer Graf Groneberg writes about defending her right to homeschool her son who has Down syndrome; Helaine Olen remembers mean mothers; Ona Gritz owns her disability, Violeta Garcia-Mendoza writes about international adoption, and Sarah Werthan Buttenwieser ponders the ethics of hiring a Republican babysitter. Right wing Christian fundamentalist mothers would probably hate this book, but others will no doubt find themselves stirred up enough to vote for change.
Trustpilot
Copyright © 2022 Thriftbooks.com Terms of Use | Privacy Policy | Do Not Sell My Personal Information | Accessibility Statement
ThriftBooks® and the ThriftBooks® logo are registered trademarks of Thrift Books Global, LLC