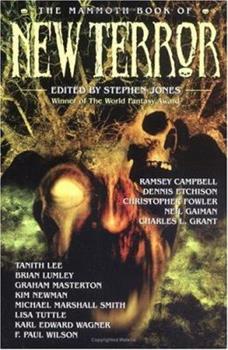 The Mammoth Book of New Terror

The Mammoth Book of New Terror is a revised and expanded new edition of the touchstone collection of modern horror fiction, selected by the acknowledged master of the genre--the award-winning godfather of grisly literature, Stephen Jones. Here are over 20 stories and short novels by the masters of gore, including Clive Barker, Ramsey Campbell, Dennis Etchison, F. Paul Wilson, Brian Lumley, Tanith Lee and John Kaine. This classic Mammoth title features...

Published by Thriftbooks.com User , 14 years ago
Wow, I really liked this having read some of the other Mammoth Series books Jones had edited this one is top notch. Which isn't to say those were all bad but the ones I've read haven't had as many good stories as this volume boasts. "Fruiting Bodies" by Brian Lumley starts it off with a bang. "Needle Song" by Charles L. Grant and "Reflection Of Evil" by Graham Masterton are brilliant. E.C. Tubb's "Mirror of the Night" fits nicely in this terror anthology as well as does "The Fourth Seal" by the ever prolific Karl Edward Wagner. "The Chimney" is an excellent Ramsey Campbell short and "The Circus" by Sydney J. Bounds is also a great story. Unfortunately "Dark Wings" and "It Was the Heat" and a couple others paled badly by comparison. Overall an excellent read and the closing tale "Among the Wolves" by David Case ends on a high note.

Published by Thriftbooks.com User , 14 years ago
It's taken me awhile to appreciate that horror doesn't always have to be Stephen King-esque monsters & slitherings in the basement (which, I love, don't get me wrong!). The Mammoth Book of New Terror stories range from just strange (Fruiting Bodies), to eternally unsettling (The Fourth Seal), & downright icky (Foet)! I'm positively delighted with this book!

Published by Thriftbooks.com User , 15 years ago
We have got rather used to the fact that every year Stephen Jones would come up with a substantial compilation under the name: BEST NEW HORROR. This entire series had begun a decade back with a collection (The Mammoth Book of Terror) that later became a watershed in the evolution of Horror & Fantasy anthologies, like the "Great Tales of Terror & Supernatural" and "The Dark Descent". This anthology celebrates the "spirit" of that collection with stories that would keep on haunting you long after the lights are switched off.
Copyright © 2020 Thriftbooks.com Terms of Use | Privacy Policy | Do Not Sell My Personal Information | Accessibility Statement
ThriftBooks® and the ThriftBooks® logo are registered trademarks of Thrift Books Global, LLC