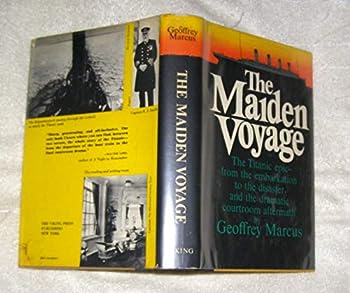 The Titanic epic - from the embarkation to the disaster and the dramatic courtroom aftermath. Over the years many writers have described this greatest of marine disasters, and their well-told accounts... This description may be from another edition of this product.

Published by Thriftbooks.com User , 20 years ago
The sinking of the Titanic, like many traumatic events, can be and has been examined over and over again. The examinations cover the same ground. Sometimes they disagree. But each examination illuminates certain details over others, giving a new slant to the event. Geoffrey Marcus' Maiden Voyage was an early addition to the Titanic examinations. It was written prior to Ballard's expedition and lacks knowledge of Ballard's discoveries. It also contains surprisingly little of the passengers' memories, relying mostly on the published accounts (Lightoller, Beesley, Gracie). It is possible that Marcus did not have the same kind of access to the passengers' reminiscences as later writers. Despite these deficits, Maiden Voyage is a worthwhile read. Marcus' approach is fairly traditional. He is writing from within the context of maritime rules and customs. The ship was going too fast in a dangerous zone. The Captain should have known better. Marcus likewise severely castigates the California for ignoring distress flares, no matter who produced them. Marcus makes a good defense of his approach but the real strength of Maiden Voyage is in the overall view it gives not of the personal experiences (as in Lord's book) or of the random incidences and accidents that resulted in the tragedy (as in Butler's book). Marcus concentrates on the social, political and maritime responses to Titanic's sinking. His chapters on the Senate hearing and the British inquiry are fascinating in this regard. Marcus considers the Senate hearing chaotic and bumptious, and the British inquiry a whitewash, but he points out that both elicited important information. Recommendation: Don't spend too much unless you are an "I've read everything ever written about the Titanic" buff.

A detailed account from the construction to the hearings.

Published by Thriftbooks.com User , 23 years ago
While it is correct to say that some of the information has since been proven untrue, that can be said of most investigations which are reviewed, with the passage of time and further analysis. I would not fault the author's integrity, but recognize the enormity of the task. It is important to note that I first read this book in 1980. It's first printing was well before the current popular focus on the event. Mr. Marcus did an excellent job considering the passage of time, loss of witnesses, and lack (at the time of his first printing) of applied sciences. I would reccomend "Maiden Voyage" to anyone interested in; a detailed nonsensational account of the processes (human and technological) which led to the disaster, and a revealing portrait of humanity in a crisis situation. Further, as a long time radio operator, I can appreciate the author's portrayal of what it was like to communicate with headphones and a telegraph key over great distances and under both difficult and pleasurable circumstances. Taking into account the additional information which has been acquired since "Maiden Voyage" was first written, to me, this book is to the sinking of the Titanic, what the book "Gettysburg" is to the war between the states - a classic in documentary literature, presenting the best of the information available at the time of it's writing. I have not seen the recent movie on this subject.

Published by Thriftbooks.com User , 23 years ago
Allthough some of the information has, since it's publication, been proven untrue, this book is an interesting one for the Titanic Enthusiast. The information presented shows what the Titanic's brief life was like for her passengers and crew and offers background information on these people.
Trustpilot
Copyright © 2022 Thriftbooks.com Terms of Use | Privacy Policy | Do Not Sell My Personal Information | Cookie Preferences | Accessibility Statement
ThriftBooks® and the ThriftBooks® logo are registered trademarks of Thrift Books Global, LLC