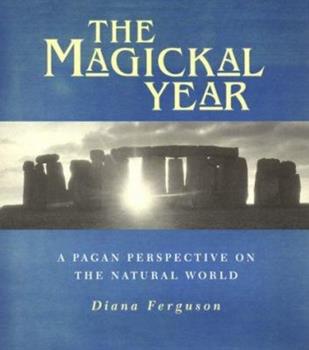 The Magickal Year: A Pagan Perspective On the Natural World

THE MAGICKAL YEAR provides a historical context for pagan belief and examines our changing spirituality in conjuction with our relationships to the natural world. Ferguson explores the mythic beliefs and magical traditions behind the eight pagan festivals of the year.

A great book to help you understand the pagan year.

Published by Thriftbooks.com User , 17 years ago
This is one of the best books about the wheel of the year. I would recomend this to some one who is converting from cristianity to some sort of pagan religion. This book explains the pagan influences in the christain year, mostly Catholic, in a clear informative way. This is also a great book to read if you are just plan interested in pagan customs. Now this doesn't give any riruals this is purely a scholarly work, but well worth the read. Blessed Be!

Published by Thriftbooks.com User , 20 years ago
I am the 30 year old daughter of a retired Lutheran minister, raised in the church, baptized in the church, and named for a key character from the bible. I have a dear friend who is pagan, he has been for years. He loaned me this book, and I found it so incredibly insightful. I've often wondered how the "other" holidays fit in to the Lutheran religion. Now I know that my father's religion stemmed from the pagans. This book should be read by everyone who has any questions on religion. It is full of honest, documented, proven facts.

A Great Book On the Pagan Holidays

Published by Thriftbooks.com User , 21 years ago
This book was more than I usually pay for a book,but it is hard cover and well worth it! I'm a Witch and proud of it so I keep this book on my coffee table for who ever wants to pick it up & look through.Like the one reviewer said Ms.Ferguson tears the christian religion apart.How? By revealing by way of history that our pagan ancestors (and we all have them) worshipped our Earth Mother/Father by way of rites & rituals that the church eventually stole and used to try to convert the "heathens".I LOVE when the truth is told! Thank-you Ms.Ferguson.This book also has besides alot of history & lore,beautiful pictures.I especially like the one on pg.98-99.She also gives info on Goddess & God and the Divine Child.As well as info on the Moon and Nature Spirits/Faeries,Holy Wells and the Sacred Marriage.I recommend this book to all pagans,and non-pagans(if they can bear the truth).

Published by Thriftbooks.com User , 21 years ago
Any student of mythology and women's issues should find this lyrical work most intriguing. Opening with the Celtic web of life as a metaphor, Diane weaves the magic of womanhood throughout mythological concepts of the moon, fertility, and the seasons, creating an intricate tapestry of enlightenment. The writing is simple, the style majestic. A good first source for understanding the impact of female power on Druid culture.

Published by Thriftbooks.com User , 22 years ago
This is probably the best book about Pagan holidays that you can get. The first chapter gives a detailed account of the develoupment and rise of the ancient Goddess religion of Old Europe, and then with each chapter, tells just about everything there is to know about all eight of the holidays on the Pagan wheel. TONS of pre-Christian mythological legends are told about. And let that be a warning that this book should NOT be read by Christians. Although she never actually makes any slurs against Christianity, throughout the book, actually every four pagaes or so, she slowly and carefully pulls the Christian religion to pieces and then proceds to put it in a blender on the highest speed. And she does this with rich, pre-Christian history of everything that modern Wiccans hold sacred. She seems to ignore neoPaganism though, well, not ignore, she just tells a tale of history, and kinda leaves off when the iquisiton starts up. Another thing people might like about this book is that she rarely uses the "W" word to describe the practices. Today, all this stuff is lumped together under the title of traditional Witchcraft, with Wicca being defined as the revival of it. But anyone whose not well versed in the meaning of Witchcraft can read it without being confused and saying "don't Witchces worship Satan?" Go get this, it's a greatlooking hardcover book that should be displayed not on your shelf, but in the open where everyone can see it and enjoy, and it's also the best book there is for historical info concerning Pagan holidays.
Copyright © 2020 Thriftbooks.com Terms of Use | Privacy Policy | Do Not Sell My Personal Information | Accessibility Statement
ThriftBooks® and the ThriftBooks® logo are registered trademarks of Thrift Books Global, LLC