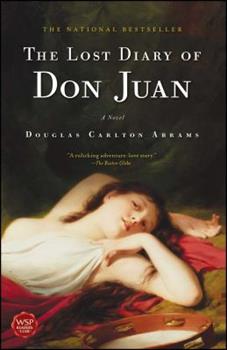 The Lost Diary of Don Juan

It was a time of discovery and decadence, when life became a gamble and the gold that poured endlessly into the port of Sevilla devalued money, marriage, and love itself. In the midst of these treacherous times, Juan Tenorio is born and then abandoned in the barn of a convent. Raised secretly by the nuns, he learns to love and worship all women and wants nothing more than to be a priest, until he falls in love with one of the sisters. When their affair...

Published by Thriftbooks.com User , 13 years ago
Before reading The Lost Diary of Don Juan, the infamous title character was nothing more than a name to me. From a mere caricature, Abrams has skillfully created a character who is richly complex and multi-layered. As I read the eloquently written pages of Don Juan's diary, it was impossible not to be drawn into his libertine life and the intrigues of the city of Seville in 1593. With beautiful, readable prose, Abrams paints a vivid picture of late 16th century Spain. The descriptions have a very cinematic feel. I could visualize the walled courtyard of a nobleman's home, and the dark, dank interior of Don Juan's favorite tavern. I could feel the velvet fabric of his maroon doublet. I could smell the faint, seductive orange-apricot scent of a woman's perfume. The prose tends to feel a little flowery and euphemistic when describing Don Juan's many and varied sexual encounters, the upside of this being that the subject matter is thus handled in a manner that is inoffensive to a broader audience. The Spanish Inquisition was going strong in 1593, creating a sinister atmosphere in Seville which Abrams conveys well. His Inquisitor is a cruel, dark, ominous figure. The reader will sense that treachery and betrayal are rampant in Don Juan's world. Because of this, the trustworthy few - a nun or priest here, a loyal coachman there - feel all the more significant and engaging as supporting characters.

Published by Thriftbooks.com User , 14 years ago
I loved this book. It is an imaginative and useful vehicle the author has chosen in the legend of Don Juan to entertain, enlighten, and engage the readers on a tour of action, danger, passion and, ultimately, enduring love. I didn't know much about Don Juan other than the broadest of stereotypical themes and images. That has now changed. The Juan brought to life by Abrams is the kind of character that stays with you and (hopefully) remains part of you long after you have moved on to other adventures of your own. Abrams did an outstanding job with the details and the tone of this book that help take the reader to 16th century Spain. I read this book on vacation - in the beauty of the Wisconsin Dells, the Black Hills, and the Rocky Mountains. But among all that splendor, many of the best parts of each day were spent in Seville, in the 1590s, with Don Juan and his quest for love. A great read.

Published by Thriftbooks.com User , 14 years ago
Doug Abrams has delivered an amazing, fast-paced adventure filled with passion, intrigue, and humanity. This book is truly a page-turner, brilliantly crafted and researched, yet tightly written. For those suspicious of historical settings which sometimes provide too much detail for the impatient reader, fear not! This story moves along really nicely in the first hundred pages, and the next two hundred will find you torn between racing to find out what happens next and savoring every delicious detail. Speaking of delicious detail, the scenes depicting Don Juan's "conquests" were beautifully, tastefully, and respectfully written. At the same time, anyone of the male persuasion seeking to expand his repertoire with respect to wooing the fairer sex could do worse than to peruse Don Juan's diary as a great "how-to" manual on romance, love, and, of course, seduction! The writing reflects a deep understanding of women and a beautiful philosophy reconciling the age-old questions about passion versus love, ironically providing a recipe for both. This book brings to life the rich splendor and the harshness of life during 16th century Spain. As Don Juan races through the streets, over the rooftops, and in and out bedroom windows of Seville, the reader is immersed in a powerful drama ripe with fascinating (yet never overpowering or depressing) details of life in another time. These pages provide a ringside seat to the terrors of the Inquisition, the promises of gambling on riches from new worlds, the privileges and oppression coexisting in a rigid class structure, the tastes and smells of glorious banquets and celebrations, and, of course, the joys of great passion and seduction. Lastly, Abrams' Don Juan is anything but the cardboard stereotype we have come to associate with this character in modern thinking. Don Juan Tenorio's story is filled with humanity. One cannot help but fall in love with Don Juan and admire his journey from orphan to noble and his loyalty to the friends of his early days. We root for our hero as he grapples with ethical, moral, and social questions, and we cheer him on as he displays touching, charming, and dangerous examples of chivalry, generosity, and friendship. Buy this book and plan an amazing weekend getaway in the comfort of your couch! Ladies, buy copies for all the men in your lives who might appreciate some insights into the fairer sex, then buy copies for all your girlfriends so you can TALK ABOUT the details! Gentlemen, buy copies for all for your friends (bachelors and otherwise)! The wisdom and romance in these pages will spice up and deepen any relationship.

Published by Thriftbooks.com User , 14 years ago
I found this book mesmerizing -- and at the same to have a very deep heartful side to it. It's an amazing page turner, exciting as hell, with a plot that just keeps twisting and turning so that you can't wait to see what happens next. Meanwhile, the main character, Don Juan, slowly becomes ever more real and more human. He begins as the notorious seducer of women, with an attitude towards his conquests that, no surprise, is almost cavalier. He will be with no woman more than once. He recognizes and awakens and serves their desire, but then departs. But as time and fortune have their way with him in this absolutely thrilling telling, his heart starts to open, and almost in spite of himself he finds himself falling utterly in love with the one woman he cannot seem to impress. After decades of conquests, the man whose very name has come to be synonymous with seduction for seduction's sake, comes to question how he has lived and is ready for a much greater adventure. Does he find that a single kiss in the arms of your true beloved is worth more than a thousands nights with a thousand different women? I won't spoil the story for you by giving away the outcome, but I will say this: If you have ever wondered how -- or if -- sexual liberation and monogamous commitment can go together, read this book. It's a spellbinding story that left me breathless, wanting more, and also deeply affirmed in my choice to be true to one woman.

Published by Thriftbooks.com User , 14 years ago
In Seville, he was named Juan Tenorio, but his mother abandons him near a monastery. Nuns secretly raise and torture the child even as they train him to cherish and worship women. He eventually runs away from the nasty environs to become an outlaw. Eventually he meets the Marquis de la Mota, who teaches him to be a master spy, a master swordsman, and a master lover. He is so adept at the latter; some consider him to be a demon. Hearing word of the legend of lovemaking, the inquisitor general investigates Don, who refuses to wed even at the coaxing of his mentor as a means of saving his life. That is until he encounters the fiery warrior woman Dona Ana. Using the device of finding Don Juan's diary to tell his story works brilliantly in Douglas Abrams' superior historical fictional memoir of the renowned lover from his perspective. By writing the saga through the journal, Don Juan becomes more than a one head joke as the audience sees a full blooded person with wants and desires that are not only in the boudoir. Interestingly when Don Juan describes a conquest (and not just with women), he waxes poetic like a romance writer. Readers will enjoy this fast-paced account of the world's greatest lover as he plunges into one escapade (and woman) after another. Harriet Klausner
Copyright © 2022 Thriftbooks.com Terms of Use | Privacy Policy | Do Not Sell My Personal Information | Accessibility Statement
ThriftBooks® and the ThriftBooks® logo are registered trademarks of Thrift Books Global, LLC